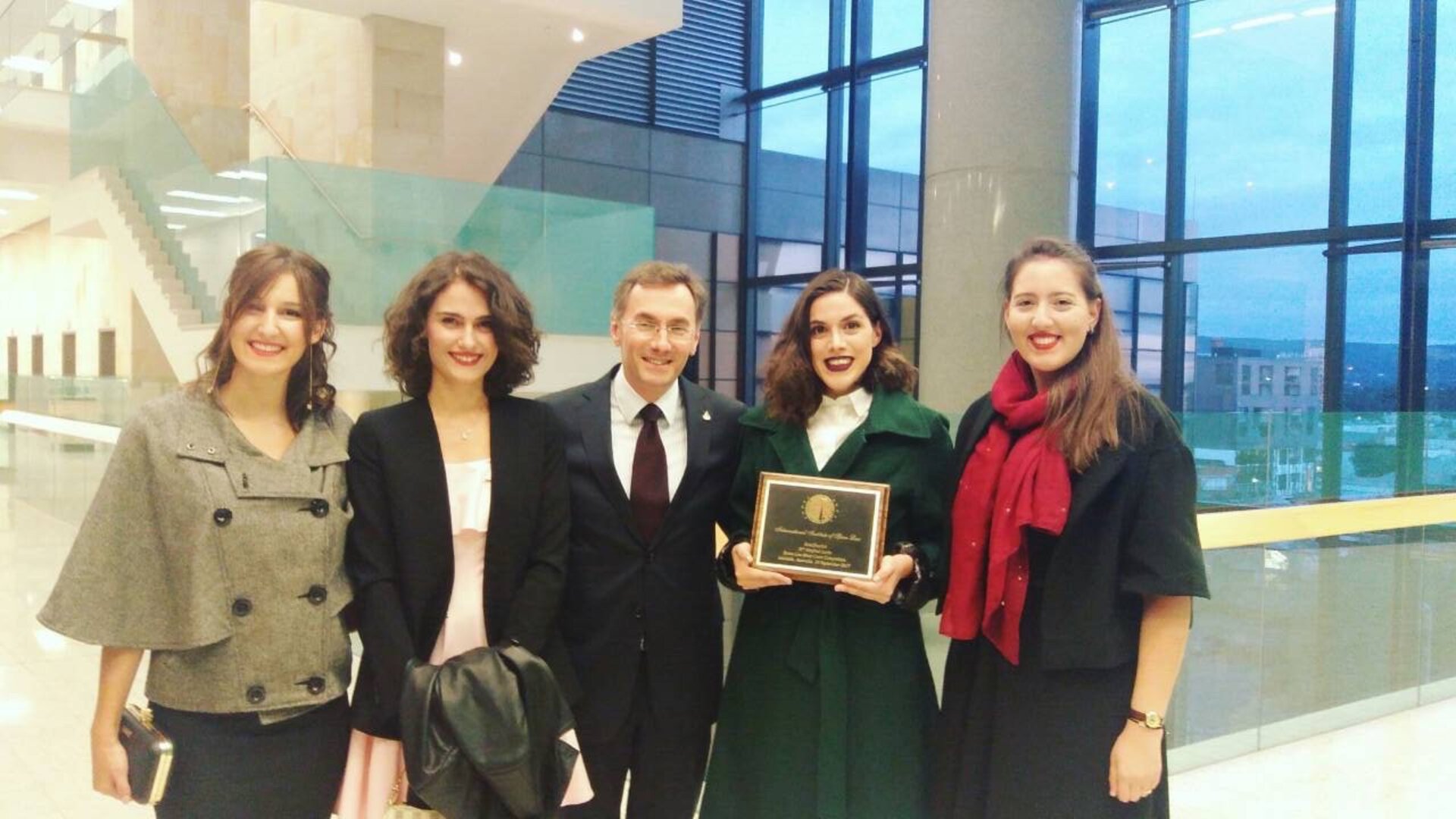 In snowy Helsinki, Pelagia Ioanna Ageridou, Iliana Griva and Yvonni Vastaroucha from the National and Kapodistrian University of Athens, were crowned this year’s winners of the European Rounds of the Manfred Lachs Moot Court Competition. As have become tradition, the ECSL sponsored their trip to compete in the World Finals. The World Finals are always organized in parallel with the International Astronautical Congress, which this year took place in Adelaide. We asked the team to tell us about their experience of competing in the Manfred Lachs Moot Court, which took them from Arctic conditions in Finland to sunny Australia.

After one year full of experiences, our participation in the Manfred Lachs Space Law Moot Court Competition of 2017 is a nice story to be told. A series of vibrant memories play on a reel in our minds; first came the hard part, the preparation. It was a real challenge for some undergraduate students who were just making their first steps in space law to deal with the complicated and controversial issues the 2017 Case was raising.

Despite the countless hours of research, the sleepless nights, the difficulties and the tons of “scrapped” digital papers, we were being gradually seduced by the intricate law notions, the research for arguments, the deeper knowledge we were gaining every time we connected the dots that led us to the solution of this year’s Problem. The gains of the preparation were immense. This year we have probably learnt more than four years in a law school could offer. We have learnt how to be lawyers, how to; defend our client, structure our arguments, conceive law, speak in public and how to work productively as a team. It was a character-building and a self-changing experience.

After the energy-consuming but so constructive preparation we took off for the European rounds which took place in Helsinki, Finland in May, 2017. The regional rounds were exemplarily organised by the European Centre for Space Law to whom we owe significant gratitude. The schedule and timeline were detailed and accurate while the reception before the competition made us all feel part of the European space family rather than competitors. Most of the teams already felt familiar in this first instance.

The oral rounds were hosted in the University of Helsinki and were judged by highly qualified space professionals from all over Europe, an element which really gave us the essence of reliability. In the Semi-Finals and the Finals we had the amazing chance to plead in the Supreme Administrative Court of Finland. The academic level of the teams was challenging and this allowed us to get the most out of this experience. Although the fever of receiving a well-written Memorial just a day before the Semi-Finals might sound terrifying, it actually kept all teams concentrated and enthusiastic.

Winning the Final Round was definitely an undisputed reward for such a long and hard journey. But, had we not won it would still have been a great experience. This was obvious in the atmosphere between the teams and the organizers at the final dinner. All things considered, the European round in snowy Helsinki left us with an experience as sweet as Uni-activities can be: a learning process, a beautiful city and a bunch of new space-freak friends wishing “good luck” for the World Finals!

The European Champions award allowed us to travel to the faraway Adelaide in Australia. Our safe and comfortable trip as well as our accommodation were ensured by the European Centre for Space Law. Along with the Moot Court, we had the unique opportunity to become part of the greatest international space event of the year, the International Astronautical Congress. We saw amazing things such as a real size replica of NASA’s Curiosity rover, we were informed about projected missions in outer space - like SpaceX’s nearly science-fiction plans and we met various high-level professionals from the space domain.

As for the world rounds, despite the fact that we only made it to the Semi-Finals, it was a great honor and awe to stand before and shake hands with three Judges of the International Court of Justice. The whole procedure of the Final Round was really interesting and we were really excited to attend the session, listen to the questions the Judges posed and see how their Excellencies would deal with controversial and difficult issues within international law and space law.

The dinner after the Final was also a great opportunity for us to meet with the space law family and to have a talk with the I.C.J. Judges themselves, who were really accessible, friendly and eager to discuss any academic issue raised and to answer all of our questions.

All in all, the Manfred Lachs Space Law Moot Court Competition was an once-in-a-lifetime experience and will definitely be a valuable stepping stone for our further development and progress.

The dates and place for the 2018 European rounds of the Manfred Lachs Moot Court Competition will be announced in the coming weeks on the ECSL webpage and LinkedIn page.

The ECSL it the European Organisors of the competition, while the International Institute of Space Law (IISL) is the world organisors. For more information about the competition check out the section dedicated to the competition on the ECSL website.
The problem for 2018 is already published on the IISL website: http://iislweb.org/2018-lachs-moot-case-revised/