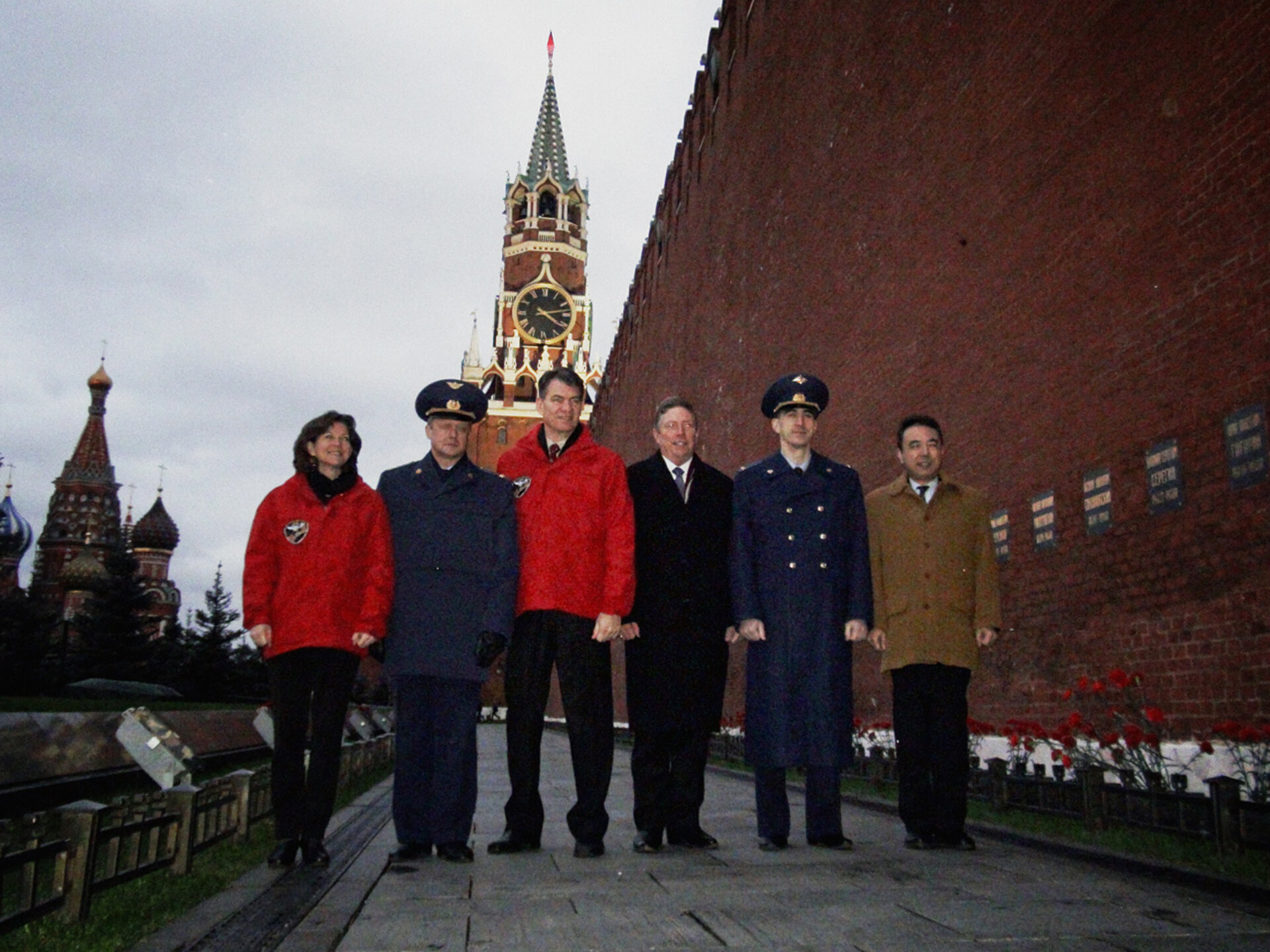 Gagarin's memory is still very present in Russia as the crews launching with Soyuz spacecraft go through numerous traditions, either remembering Gagarin or repeating his actions made before this historic flight.

The ashes of Yuri Gagarin and four cosmonauts who perished during spaceflight accidents (Soyuz 1 and Soyuz 11) are interred on the Cosmonauts’ Avenue outside the Kremlin Wall in Moscow. Soyuz crews visit this memorial wall and lay red carnations there.

They also sign the Visitors’ Book in Yuri Gagarin’s office, preserved as a museum at Star City. The office preserves everything as it was when Gagarin left for his the ill-fated flight on 27 March 1968.

About two weeks before their launch, Soyuz crews fly from Star City to Baikonur, where they stay at the Cosmonaut Hotel, Baikonur, about 20 minutes drive from the Cosmodrome.

Behind the hotel buildings, leading to banks of the Syr Darya River, there is an avenue of trees. A tree is planted here by each person who has flown on a Soviet or Russian spacecraft into space. Crews walk in this avenue, now expanded to park, and plant their own trees.

About five days before launch, the crews take part in a flag-raising ceremony outside the Cosmonaut Hotel and visit the museum of the Cosmodrome, where they sign books, envelopes and mementos.

The Soyuz launcher, with the Soyuz spacecraft already attached to it, is rolled out on a special railway carriage exactly 48 hours before launch, at 7:00 in the morning local time in Kazakhstan.

Crews do not see the roll-out and erection of the Soyuz rocket on the launchpad, because this is considered to bring bad luck, but personnel and visiting guests can put coins on the rails as a good luck charm; these coins will get totally flattened under the weight of the locomotive and the rocket-carrying train.

Because two accidents took place in Baikonur on 24 October (1960 and 1963), no launches are ever scheduled for that day.

The crews then follow some actions done by Gagarin prior his flight:

Nowadays a Russian Orthodox priest blesses the crew on the steps of the Hotel, but during Gagarin's time this was not practised. This tradition begun when cosmonaut Aleksandr Viktorenko requested a blessing for the Soyuz TM-20 crew before their launch to Space Station Mir.

Two buses, the Star City bus with blue stripes and the Baikonur bus with yellow stripes, are used to carry cosmonauts and personnel to the launch pad, are both adorned with horseshoes. The ride to building where the crews are suited takes about 40 minutes.

On the way to the launch pad, apparently Gagarin had to 'take a leak', and therefore all (male) crewmembers do this now as well. They leave the bus and stand at the left back wheel of the bus, to relieve themselves.