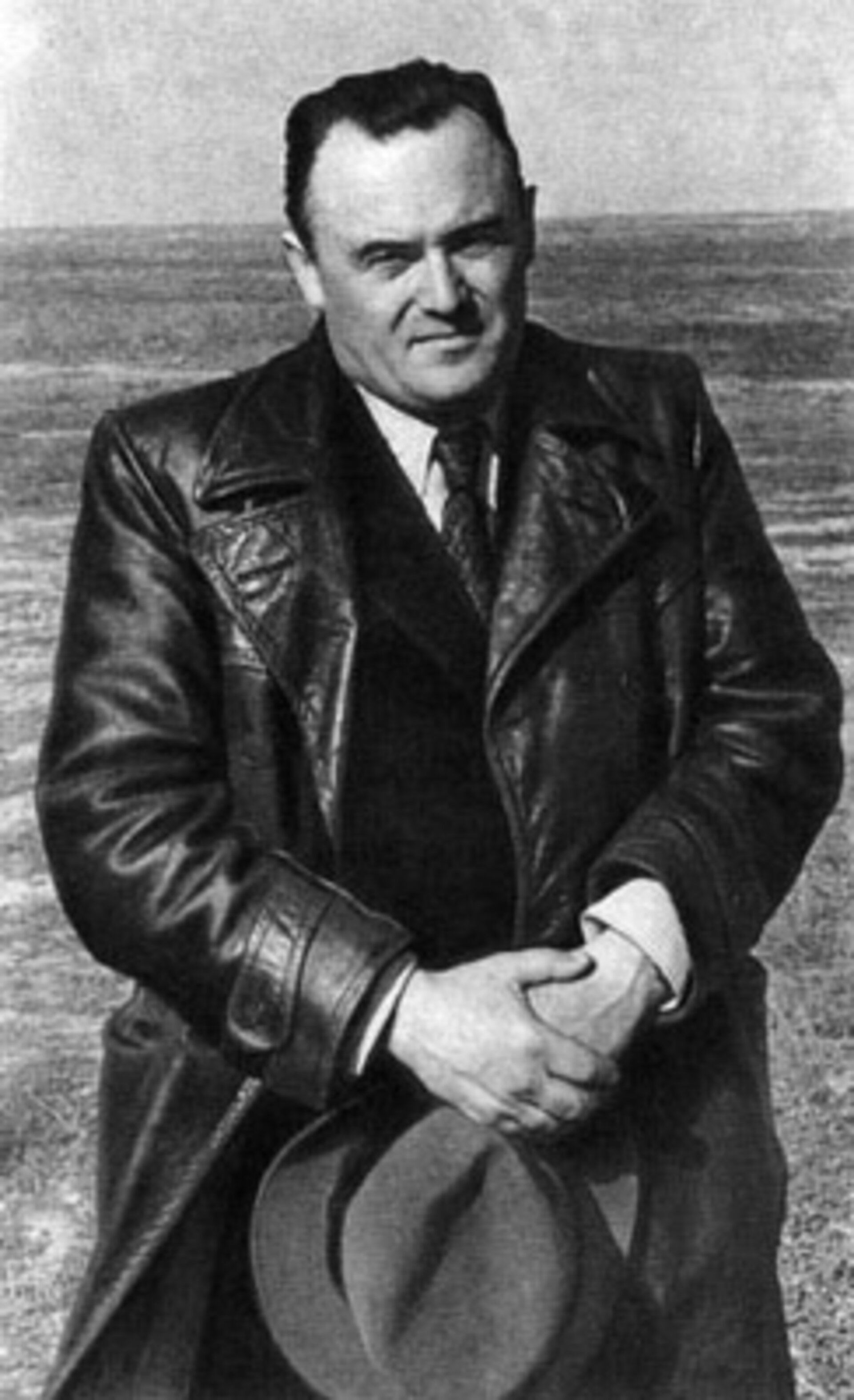 Sergei Korolev is the man responsible for the first human spaceflight. Although the world knew of his achievements - Sputnik, Vostok, Soyuz - the man himself remained a total mystery until his death, as his identity was a well-kept state secret. A victim of Stalinism, after his death he became an icon of Russian rocketry and both his rocket and spaceship designs are still flying today.

Sergei Pavlovich Korolev was the son of a teacher of Russian literature, he was born on 12 January 1907 in Zhytomyr, Ukraine. Fascinated by aircraft, he designed his first glider when he was only 17. After graduating from the Kiev Polytechnic Institute, he joined the University of Moscow and his interest shifted to rocket propulsion, at the time still a theoretical subject only.

In 1931 he founded the Group for Investigation of Reactive Motion (GIRD), which developed the first Soviet liquid-fuelled rockets: the GIRD-9 and 10. The group was taken over by the military in 1933 and became known as RNII, the official centre for research and the development of missiles and rocket-powered gliders. Korolev was in charge of aerospace structures while his colleague, Valentin Glushko, was responsible for propulsion systems. Together they designed the RP-318, the first Soviet piloted rocket-powered glider.

These were difficult times in the Soviet Union as the great purges began under Stalin. On 23 March 1938, Valentin Glushko was arrested. To reduce his charges he denounced Korolev, which resulted in his arrest on 7 June and a sentence of ten years forced labour. From that day on, the two men were bitterly opposed to each other.

In all, Korolev spent more than two years in various jails, including four months in the Gulag. Fortunately for him, the famous aircraft designer Andrei Tupolev was also a political prisoner and head of one of the prison design bureaus known as ‘sharashkas’. At Tupolev’s request, Korolev was finally allowed to join his team.

In November 1944, Korolev was promoted to the helm of his own team and given just three days to come up with a proposal for a Soviet equivalent to the German V2 missile. He met the challenge although his proposal had a range of only 75 km, just one quarter that of the V2.

One year later Korolev was sent to Germany to assess the hardware and the technicians left behind at the end of the war by the US operation ‘Paperclip’. Wernher von Braun and the best elements of the German rocket design team had moved to the United States, but a new research centre, called NII-88, was set up in Russia the following year. Although still a political prisoner, Korolev was made chief engineer responsible for designing a Soviet equivalent to the V2. The outcome was the R1 rocket, the forerunner of a family of missiles known in the West under their NATO codename: Scud.

NII-88 developed various missiles before Korolev decided in 1953 to develop the world's first intercontinental ballistic missile with a 7000 km range. The R-7 was based on a concept of stacked stages once considered by the Germans. On 21 August 1957, the R-7 was successfully launched from a new rocket site near Baikonur in Kazakhstan.

From Sputnik to Vostok

Dubbed ‘Semyorka’, the R-7 was sufficiently powerful to put a satellite into orbit. However, as the development of a science payload took longer than planned, Korolev's team designed a ‘minimum satellite’. Sputnik 1, the first satellite to be placed in orbit, was launched on 4 October 1957 and its ‘beep-beep’ signal shook the world.

To build on this resounding success, in less than one month Korolev and his team designed a second satellite. On 3 November, just in time for the 40th anniversary of the Bolshevik Revolution and before the first (failed) US attempt to launch a satellite, Sputnik 2 was launched. On board was the dog Laika, the first animal to orbit Earth. Korolev and the R-7 rapidly scored yet more firsts: the first probe to the Moon, the first picture of the far side of the Moon and the first probes to Venus and Mars.

The next big challenge was to place a man into orbit and return him safely to Earth. To achieve this, Korolev decided to modify a spy satellite concept and turn it into a human spacecraft by replacing the imaging payload with an ejection seat. After a series of test flights using dummy astronauts and dogs, Vostok was launched into space by an improved version of the R-7 rocket on 12 April 1961. On board was Yuri Gagarin.

The US answer came on 15 May with a direct challenge from President John F. Kennedy, who promised to put a man on the Moon before the end of the decade.

Korolev had his own plan to beat the US in the ‘Moon Race’. He proposed building a giant rocket, the 100-m tall N-1 as well as a modular spacecraft which had a promising future: Soyuz.

Despites his successes - or maybe because of them - Korolev was widely criticised by high-ranking military dignitaries and other space designers who pointed out that his missiles were poorly designed for a strategic role. Korolev remained undismayed by his critics; the R-7 may not have been very useful as a weapon but it was the best space launcher of its time.

The situation with the N-1 was more complex as Korolev could not come to an agreement with his old colleague, Valentin Glushko. Glushko, now the leading designer of Soviet rocket engines, believed cryogenic propulsion to be a dead end. To bypass him, Korolev turned to Nikolai Kuznetsov, who came from the aeronautical propulsion field. The problem was that as Kuznetsov’s engines were very small, the enormous N-1 would need 42 of them, 35 just for the first stage alone. Work on the N-1 was frozen and its development was only approved in 1964. By that date, the US lunar programme had been a national priority for three years.

Korolev never saw the completion of his huge 'baby'. In 1965 he was diagnosed with cancer and advised to undergo colon surgery. Unfortunately, the operation was a failure and Korolev died on the operating table on 14 January 1966. Just two weeks after Korolev’s death, Luna 9 landed on the Moon. This was to be the last big Soviet first in space for a long time.

After Korolev's death, the whole Russian space programme experienced numerous difficulties. The N-1 mega-launcher was not ready in time to beat Apollo to the Moon, and its four launches all ended in disaster. In August 1974 the programme was cancelled by Valentin Glushko, who had taken over Korolev's design bureau.

The Soyuz spacecraft and the R-7 launcher - whose latest version is also known as Soyuz - remain the workhorses of the Russian space programme and are still active more than 40 years after their designer's death. With more than 1700 flights, the Soyuz family of launchers still holds the record for the most launches and will probably continue to hold it for several more decades. In the near future Soyuz will be launched from spaceports in three different countries: Baikonur in Kazakhstan, Plesetsk in northern Russia and, starting in 2011, from Europe’s Spaceport in French Guiana on behalf of ESA.

More than 40 years after their inventor’s death, both Soyuz designs still have potential for further evolution, proof of Korolev's talent.