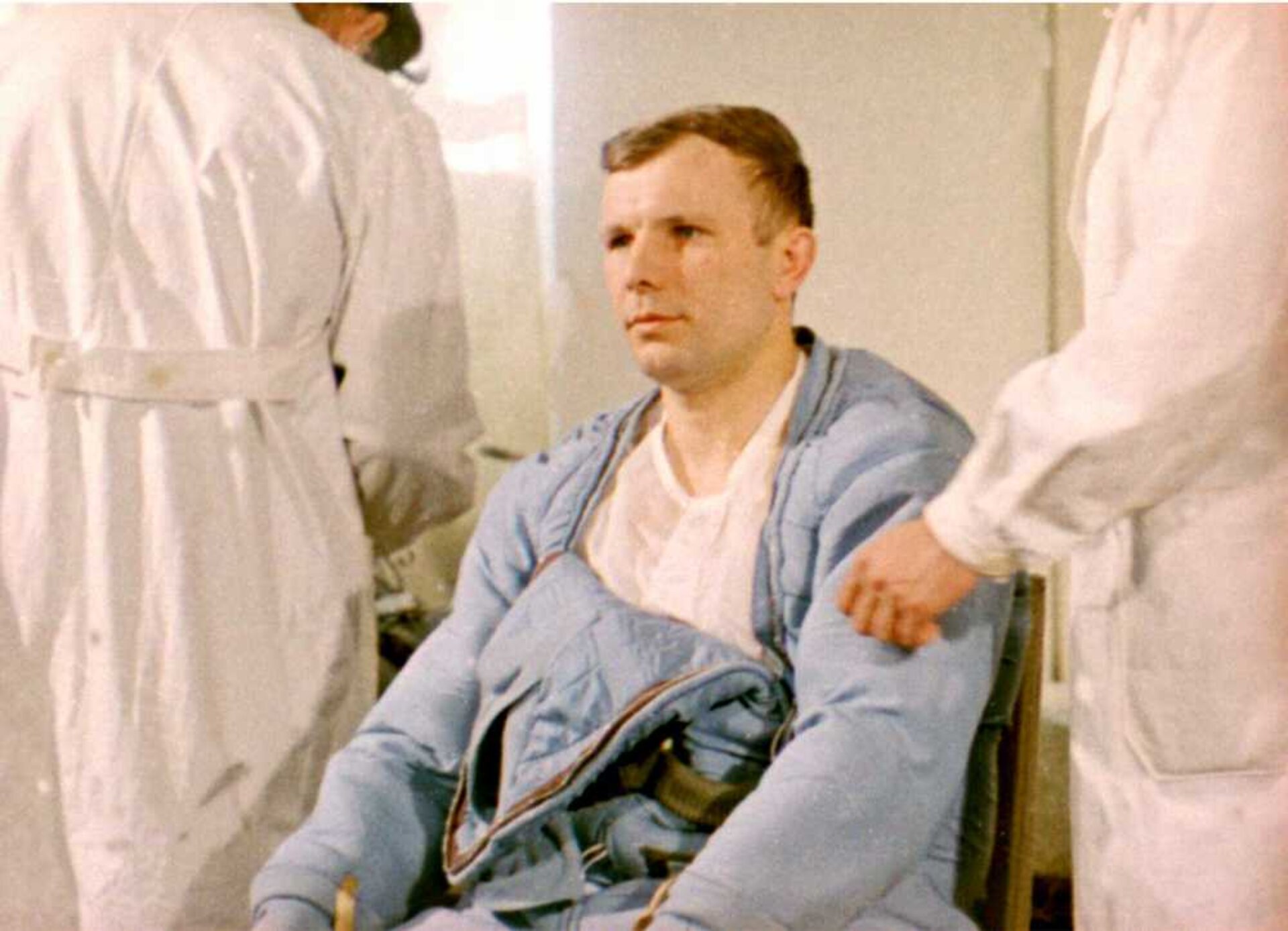 On the morning of 12 April 1961, at 5:30 a.m. Moscow time (2:30 UTC), cosmonauts Yuri Gagarin and his back-up Gherman Titov were woken in their hut at the Baikonur Cosmodrome. They had breakfast, were assisted into their spacesuits, and then were transported to the launch pad. Gagarin entered the Vostok 1 spacecraft and at 07:10 local time, the radio communication system was turned on.

The hatch of the spacecraft was closed about 40 minutes later, but it was soon discovered that the seal was not complete, so technicians spent nearly an hour removing all the screws and then resealing the hatch.

During this time, Gagarin requested some music to be played over the radio. Chief designer Sergei Korolev was very nervous in the control centre, but Gagarin was described as 'calm'; about half an hour before launch his pulse was recorded at 64 beats per minute.

06:07 UTC
Launch occurs from the Baikonur Cosmodrome Site No.1. Korolev radioed, "Preliminary stage..... intermediate..... main..... LIFT OFF! We wish you a good flight. Everything is all right." Gagarin replied, "Poyekhali! (Off we go!)."

06:09 UTC (T+ 119 s)
Two minutes into the flight and the four strap-on booster sections of the Vostok rocket have used up the last of their propellant, they shut down and drop away from the core vehicle.

06:10 UTC (T+ 156 s)
The payload shroud covering Vostok 1 is released, this uncovers the window at Gagarin's feet with the optical orientation device Vzor.

06:13 UTC
The rocket is still firing, pushing Vostok 1 toward orbit. Gagarin reports, "...the flight is continuing well. I can see the Earth. The visibility is good. I almost see everything. There's a certain amount of space under cumulus cloud cover. I continue the flight, everything is good."

06:15 UTC
Three minutes into the burn of the final rocket stage and Gagarin reports, "Zarya-1, Zarya-1, I can't hear you very well. I feel fine. I'm in good spirits. I'm continuing the flight..." Vostok 1 is moving further downrange from the Baikonur Cosmodrome. He is reporting back to Zarya-1 (the Baikonur ground station) and must be starting to move out of radio range of that station.

06:17 UTC
The Vostok rocket final stage shuts down, ten seconds later the spacecraft separates and Vostok 1 reaches orbit. (T+ 676 s) Gagarin reports, "The craft is operating normally. I can see Earth in the view port of the Vzor. Everything is proceeding as planned". Vostok 1 passes over Soviet Union and moves on over Siberia.

06:21 UTC
Vostok 1 passes over the Kamchatka peninsula and out over the North Pacific Ocean. Gagarin calls, "...the lights are on on the descent mode monitor. I'm feeling fine, and I'm in good spirits. Cockpit parameters: pressure 1; humidity 65; temperature 20; pressure in the compartment 1; first automatic 155; second automatic 155; pressure in the retro-rocket system 320 atmospheres..."

06:25 UTC
As Vostok 1 begins its diagonal crossing of the Pacific Ocean from Kamchatka peninsula to the southern tip of South America, Gagarin asks, "What can you tell me about the flight? What can you tell me?" He is requesting information about his orbital parameters. The ground station at Khabarovsk reports back, "There are no instructions from No. 20 (Sergei Korolev), and the flight is proceeding normally." They are telling Gagarin that they don't have his orbital parameters yet because the spacecraft has been in orbit for only six minutes, but the spacecraft systems are performing well.

06:37 UTC
Vostok 1 continues on its journey as the Sun sets over the North Pacific. Gagarin crosses into night, northwest of the Hawaiian Islands. Out of VHF range with ground stations, communications must now take place via HF radio.

06:46 UTC
Khabarovsk ground station sends the message "KK" via telegraph (on HF radio to Vostok 1). This message means, "Report the monitoring of commands." They were asking Gagarin to report when the spacecraft automated descent system had received its instructions from the ground control. Gagarin reported back at 06:48 UTC.

06:48 UTC
Vostok 1 crosses the equator at about 170° West, traveling in a south east direction and begins crossing the South Pacific. Gagarin transmits over HF radio, "I am transmitting the regular report message: 9 hours 48 minutes (Moscow Time), the flight is proceeding successfully. Spusk-1 is operating normally. The mobile index of the descent mode monitor is moving. Pressure in the cockpit is 1; humidity 65; temperature 20; pressure in the compartment 1.2 ... Manual 150; First automatic 155; second automatic 155; retro rocket system tanks 320 atmospheres. I feel fine..."

06:49 UTC
Gagarin reports he is on the night side of Earth.

06:53 UTC
The Khabarovsk ground station sends Gagarin the following message via HF radio, "By order of No.33 (General Nikolai Kamanin) the transmitters have been switched on, and we are transmitting this: the flight is proceeding as planned and the orbit is as calculated." They are telling Gagarin that Vostok 1 is in a stable orbit. He acknowledges the message.

06:57 UTC
Vostok 1 is over the South Pacific between New Zealand and Chile when Gagarin sends this message, "...I'm continuing the flight, and I'm over America. I transmitted the telegraph signal 'ON'.

07:00 UTC
Vostok 1 crosses the Strait of Magellan at the tip of South America. News of the Vostok 1 mission is broadcast on Radio Moscow.

07:04 UTC
Gagarin sends spacecraft status message, similar to the one sent at 06:48. The message is not received by ground stations.

07:10 UTC
Passing over the South Atlantic, the Sun rises and Vostok 1 is in daylight again. Vostok 1 is 15 minutes from retrofire.

07:13 UTC
Gagarin sends spacecraft status message, similar to the one sent at 06:48. Moscow picks up this partial message from Gagarin, "I read you well. The flight is going..."

The automatic system brings Vostok 1 into alignment for retrofire about one hour into the flight.

07:25 UTC
The spacecraft's automatic systems bring it into the required attitude (orientation) for the reentry engine firing, and shortly afterwards, the engine firing occurs. This takes place over the west coast of Africa, near Angola, about 8000 km from the desired landing point. The liquid-fueled retrorockets fire for about 42 seconds.

Around 07:35 UTC
The two halves of the spacecraft begin reentry and go through strong gyrations as Vostok 1 crosses over Egypt. At this point the wires break, the two modules separate, and the descent module settles into the proper reentry attitude. Gagarin telegraphs "Everything is OK" despite continuing gyrations. He later reports that he did not want to 'make a noise' because he had (correctly) reasoned that the gyrations did not pose a danger to the mission (and were apparently caused by the spherical shape of the reentry module).

As Gagarin continues his descent, he experiences about 8g during reentry but remains conscious.

07:55 UTC
Vostok 1 is still 7 km from the ground when the hatch of the spacecraft is released, and two seconds later Gagarin uses the ejection seat to leave the capsule. At 2.5 km altitude, the main parachute is deployed from the Vostok spacecraft.

08:05 UTC
Gagarin lands using his own parachute, which opened almost immediately after ejecting from the spacecraft ten minutes earlier. Both he and the spacecraft landed 26 km south west of Engels, in the Saratov region at 51° North, 45° East.

Two schoolgirls witness the Vostok 1 capsule landing and describe the scene: "It was a huge ball, about two or three metres high. It fell, then it bounced and then it fell again. There was a huge hole where it hit the first time."

A farmer and her daughter observe the strange scene of a figure in a bright orange suit with a large white helmet landing near them by parachute.

Gagarin later recalled, "When they saw me in my spacesuit and the parachute dragging alongside as I walked, they started to back away in fear. I told them, 'Don't be afraid, I am a Soviet like you, who has descended from space and I must find a telephone to call Moscow!'"