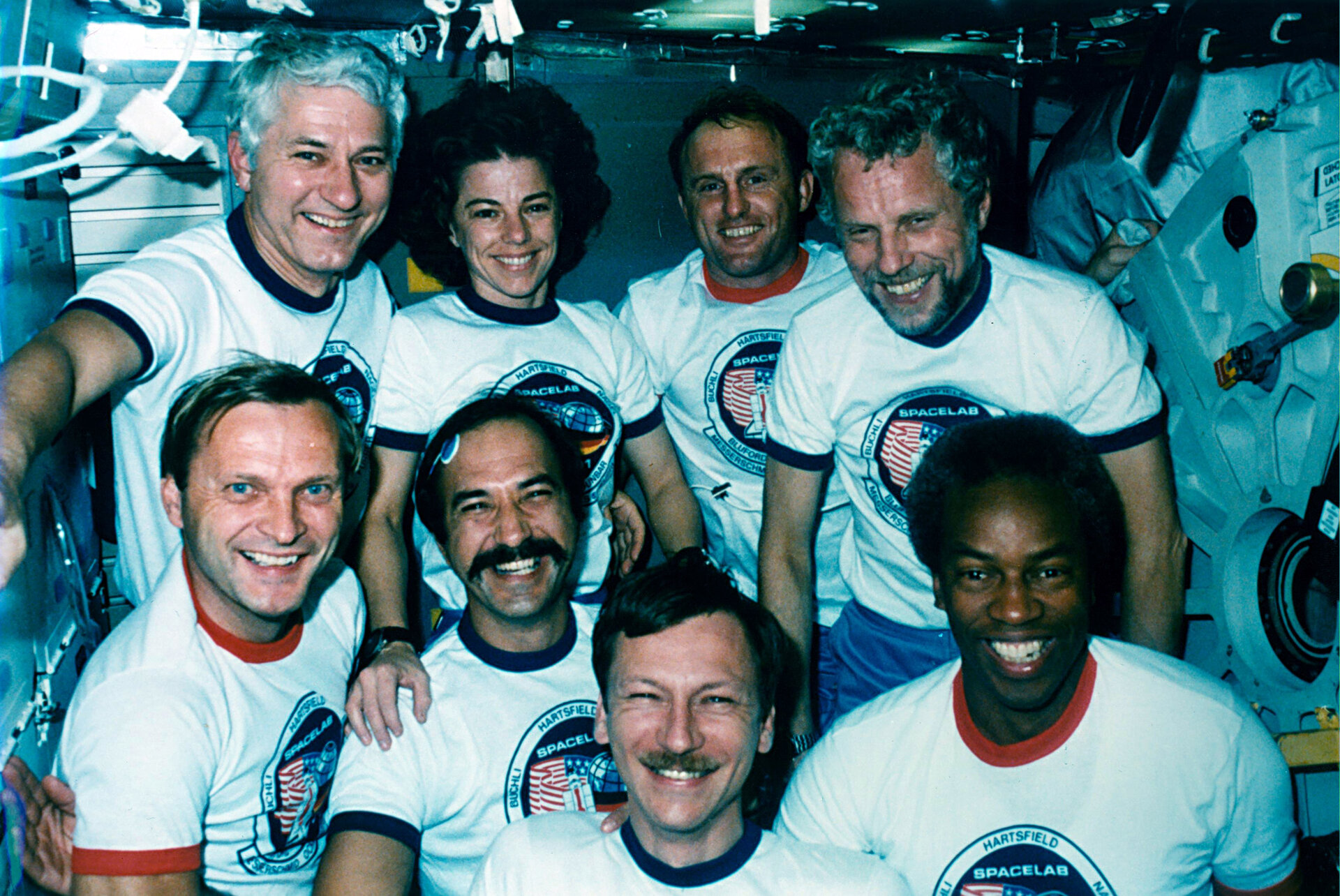 “Hans Ulrich Steimle was the mission manager, and Steimle was a very interesting fellow. He liked to philosophise. We became very good friends. I’ll never forget one day we were sitting in my office, and he was talking about philosophy. He says, ‘You know, in the United States, when a new policy comes down, the Americans, they look at this and say, Okay, here’s what we’ve got to do, and they salute and go do it.’ He says, ‘In Germany, when a new policy comes down, we study it very carefully, and decide how we can continue to do what we’re doing under this new policy.’ I thought, ‘Boy, is that ever true.’ I know some people in the US that do that too, you know. I worked with some of them.”

“On the flight, Wubbo brought on board with him, with approval, of course, a big bag of gouda cheese, individually wrapped gouda. The coolest place in the vehicle was in the tunnel that went from the orbiter mid-deck back to the lab. So he just took some tape and taped that bag of gouda up in the tunnel. Well, it was so convenient. Anybody that went back there, on the way back and forth, you reached in. About the second or third day, ‘Who’s been eating my cheese?’ He was upset because about two-thirds of his cheese was already gone. ‘That’s good stuff, Wubbo.’”

"The payload operations center was in Germany. It was just like being in Marshall Space Flight Center or Huntsville, somewhere. I guess you’d say it’s more complex, and there’s more issues to be resolved when you’re working an international programme. Not having a US mission manager made it more complex, but I see that mission was kind of an early lead-in to the Space Station.

"Maybe in a way a Spacelab is kind of like a mini space station. You are doing scientific work, but your space station’s inside the Shuttle, and you’re up there, in our case, a week. We’d been up there about two weeks in some of these later missions. So it’s kind of like a mini space station, but more importantly, the international cooperation that’s required to pull all this together made it—it was a hard mission for Hank to pull together, complicated when you’re dealing overseas. It was kind of a lead-in to we’re doing now with the International Space Station."

“The challenges that were there were typical of any mission in which you’re dealing with different cultures and different languages. They’re not insurmountable, it’s just finding the bridges. I became very good friends with Hans Ulrich Steimle and Wolfgang Wyborny, who was their Operations Manager, both really outstanding people. But I learned much about the culture from them, the decision-making processes; what was important, what wasn’t important; how to negotiate. In fact, actually Hans Ulrich came in one day and told me how to negotiate with them. I’ll never forget this discussion. He says, ‘What you must understand is —,’ and so we had a very good discussion about that.”

“STS 61-A was a unique mission. We had two mission control centers. We spoke with both mission control centers during the flight. Since we were going to operate the Spacelab around the clock, we broke the crew up into two teams called the Red Team and the Blue Team. The Blue Team consisted of Hank Hartsfield, Steve Nagel, Bonnie Dunbar, Reinhard Furrer and Wubbo Ockels. I was on the Red Team with Jim Buchli and Ernst Messerschmid. Late in the training flow, we started training as separate teams. This gave us an opportunity to become familiar with our own CapComs and crew interface coordinators (CICs). For my team, Ulf Merbold was our CIC. After eighteen months of training, the STS 61A D1 team was ready to fly.

“The payload crew worked almost non-stop in the Spacelab, while the flight crew worked in the cockpit. For the commander, pilot, and MS2, there seemingly wasn’t a lot to do so they took quite a few pictures of Earth and performed all of the routine housekeeping functions. The coordination between the CapComs in Houston and the CICs in Germany went well, even during shift handover. Ulf Merbold was our CIC and he did an excellent job supporting us on-orbit as well as working with the PIs on the ground. For me, it was a great pleasure to work with both Ernst Messerschmid and Ulf Merbold. They were true professionals.”

These are excerpts from interviews conducted for the NASA JSC Oral History Project, between 2001 and 2005. Full interviews can be found at: www.jsc.nasa.gov/history/oral_histories