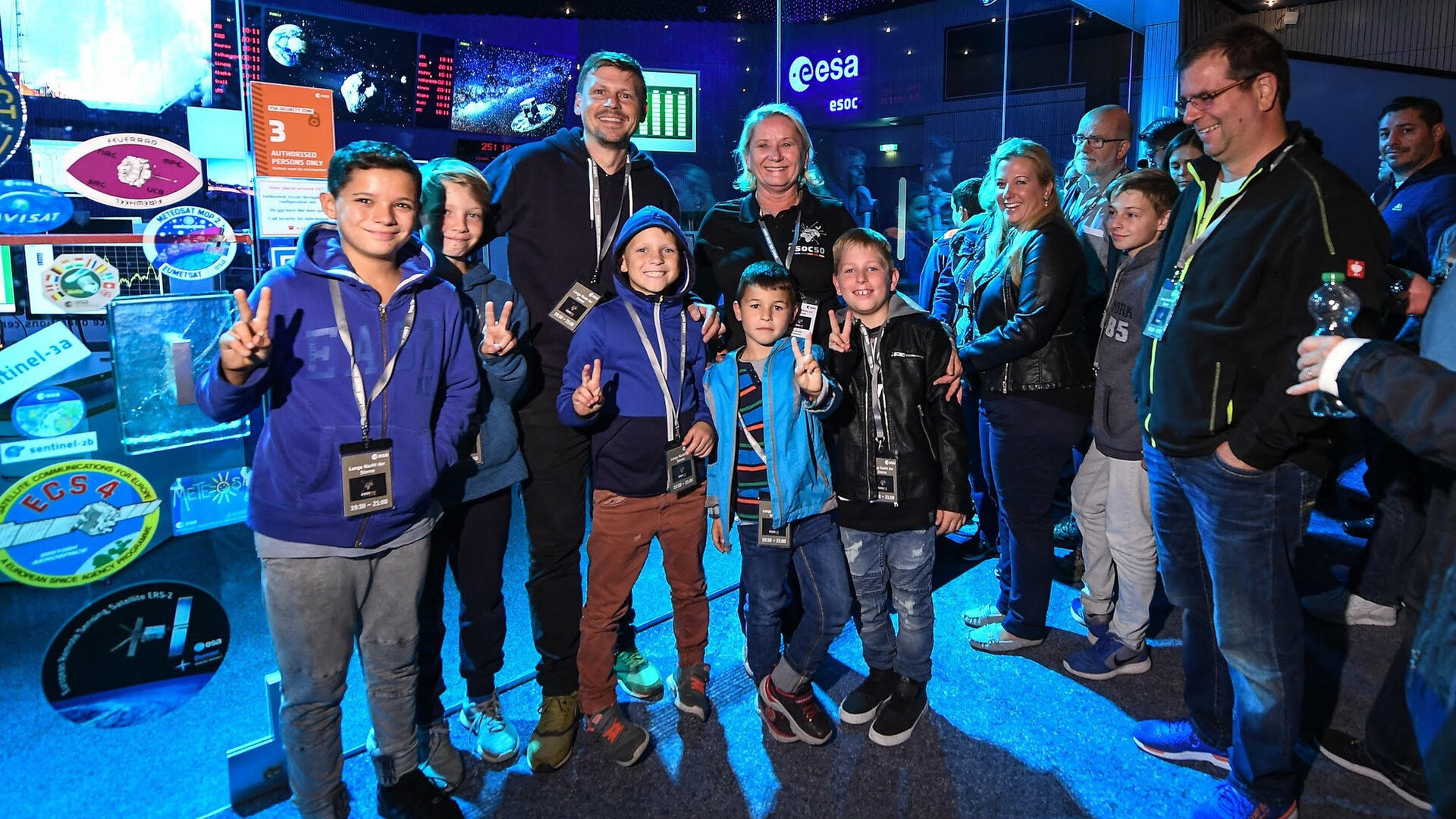 Five decades to the day after the inauguration of ESOC, ESA's European Space Operations Centre, in Darmstadt on 8 September 1967, the centre hosted a gala open-door event dubbed 'Long Night of the Stars.' That evening, some 5000 enthusiastic visitors arrived at ESOC, ready for a fantastic night of space exploration and to take part in Darmstadt's best-ever space-themed street party.

Visitors arrived from as near as the city of Darmstadt itself and as far away as Italy, and from many points in between.

The event was opened at 16:00 sharp by a group of distinguished VIPs, including the German Federal Minister for Economics and Energy, Brigitte Zypries, Minister President of the German state of Hessen, Volker Bouffier, ESA's Director General Jan Woerner, the Lord Mayor of Darmstadt, Jochen Partsch, and Rolf Densing, ESA's Director of Operations and the Head of the ESOC Establishment.

Those lucky enough to have one of the long-sold-out entry tickets could enter the site and follow a carefully planned route to see some of the most critical mission control facilities, including the Main Control Room, several of the individual control rooms for missions like the Sentinels, Gaia and Cryosat, and dedicated facilities for space debris, ground stations and flight dynamics.

Volunteer experts from ESA were stationed throughout, providing explanations and answering questions on what goes on 'behind the glass' during actual operations.

One highlight was the life-size engineering replica of the famous Rosetta satellite, which was specially illuminated and staffed by the engineers who had flown the real Rosetta 800 million km away.

After the site tours, visitors could sit in on numerous expert presentations on a wide range of topics central to ESOC's role and activities within ESA, including how to conduct a launch campaign, operational alerting for space debris, how to address risks posed by solar activity and much more.

In the Centre's Canteen, the tables and chairs were packed away and kiosks welcomed visitors with information on careers in space, the ESOC Sci-Fi Club, 'Ask An Expert' anything about space, the entrepreneurial support activities at ESA's Business Incubation Centre Darmstadt and how virtual reality can transform the art and engineering of spacecraft operations.

Outside, a number of hands-on activities and technology displays were hosted by teams from ESOC and ESA's European Astronaut Centre (how to control a lunar rover) and by partners from DFKI, the German Research Centre for Artificial Intelligence (rovers on Mars), the Polytechnic Institute of Milan's School of Design (connecting living in space with living on Earth) and from the AAW Darmstadt amateur astronomer society.

In front of ESOC, ESA, Hessischer Rundfunk (HR) radio and the Darmstädter Echo newspaper produced a lively space-themed stage programme, and the public could take part in numerous kids' play and craft activities, join hands-on experiments hosted by DLR SchoolLab, browse the ESA Space Shop and enjoy the Rosetta video dome (see links to some of the presentation files below).

Jocelyne Landeau-Constantin, Head of Communication at ESOC, was especially satisfied with the results. Over three months, her team was assisted by over a hundred volunteers from the Centre who took time in addition to their operational activities to support the Long Night of the Stars - only the fourth open-door event in the Centre's 50 years. She says the enormous effort paid off: "I've met a lot of happy, smiling people and the interest of visitors is wide and varied."

"And everyone asked, why don't we do this more often," she adds.

Long Night of the Stars photo gallery in Flickr

Note some of these are in English and some in German