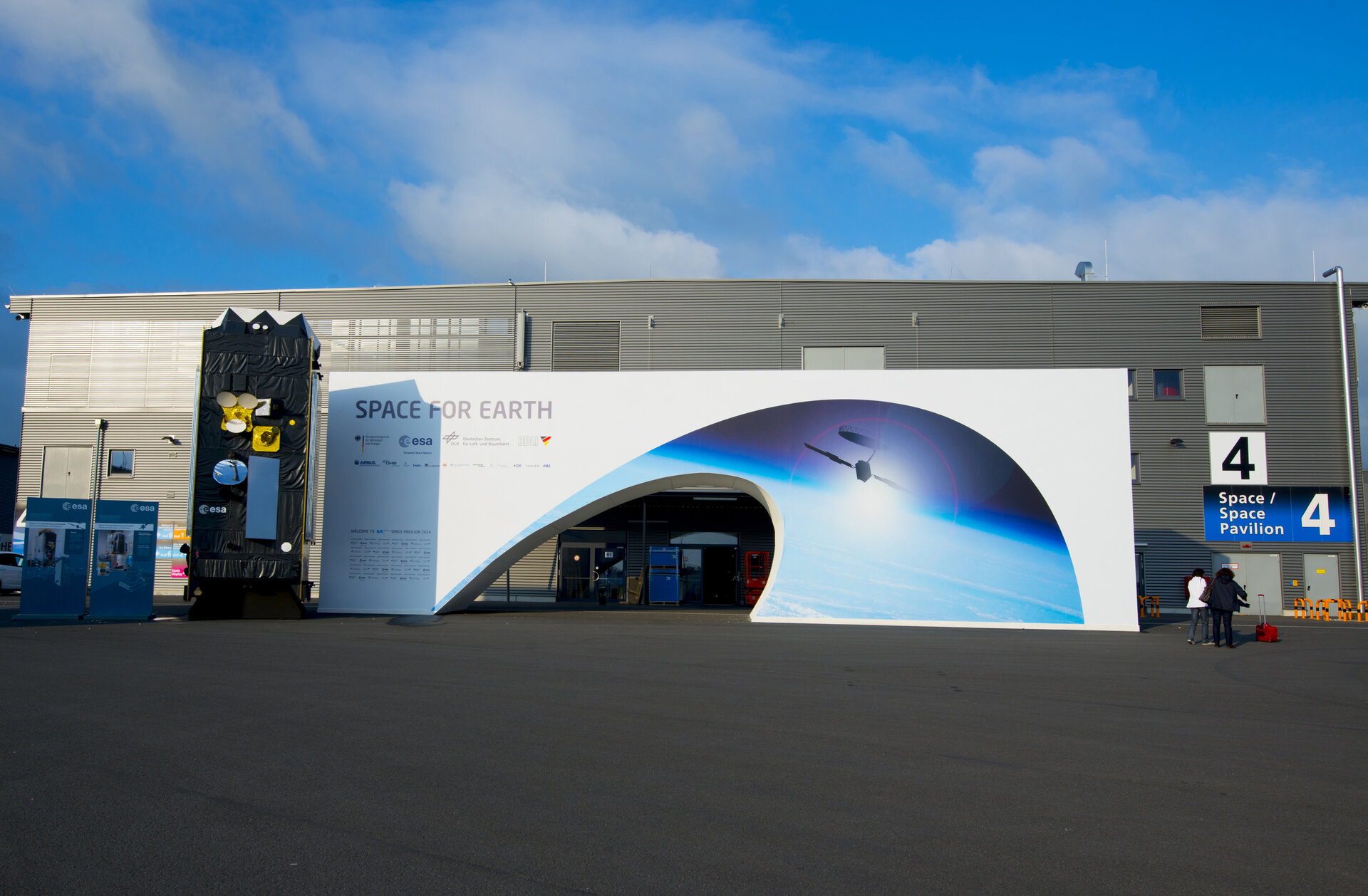 ESA will be exhibiting in the ‘Space for Earth’ space pavilion at ILA, the Berlin Air and Space Show on 20–25 May.

ILA is one of the world’s largest aerospace trade shows, bringing together key players from the international aerospace community, industry, space agencies and trade visitors interested in discovering the latest aerospace developments and new business opportunities.

The space pavilion in Hall 4 in conjunction with the German Federal Ministry of Economics and Energy, the DLR German Aerospace Center and the German Aerospace Industries Association, will feature the wealth of ESA and German national programmes across all space domains, focusing on recent mission results and upcoming launches.

This year, when ESA and its member states are celebrating 50 years of European Cooperation in Space, the exhibition underlines the importance of building on the past achievements on space science, exploration and applications to shape the future of Europe in this strategic sector.

“Investing in space is investing in competitiveness and growth through knowledge, innovation and services,” notes Jean-Jacques Dordain, ESA’s Director General.

A full-size model of Alphasat, the largest and most sophisticated telecom satellite ever built in Europe, will sit in front of the pavilion. The first mission to use the Alphabus platform was launched atop an Ariane 5 in July 2013.

Alphasat and its platform Alphabus are excellent examples of innovative public–private partnerships. ESA supports the development of satellite systems and technologies, opening up new markets for European industry by sharing expertise and risk in order to develop operational missions.

Technology development lies at the heart of ESA activities, helping European industry to improve its competitiveness worldwide. At ILA, ESA will be showing some of the innovative and cross-cutting technologies currently flying on the latest Project for Onboard Autonomy satellite, Proba-V, and will host space-developed technologies and systems spun out from ESA’s Business Incubation Centres.

In addition, ESA will present Ariane 5, Soyuz and Vega, the family of launchers operated from Europe’s Spaceport in French Guiana, offering a complete range of services and capabilities from the best launch site available in the world today.

The various proposals for new versions of Ariane and Vega, under study since the end of 2012 and aimed at maintaining European competitiveness in this key strategic sector, will also be prominently featured.

Visitors to the pavilion can learn more about space-based services provided to aviation by EGNOS, the European Geostationary Navigation Overlay Service, operational since March 2011, and about the Galileo constellation, with two further satellites to be launched in the coming months.

A special audiovisual will feature the successful conclusion of the campaign to validate the first four satellites and their ground segment in early 2014.

ESA also develops a wide range of telecom services and applications to provide space-based solutions efficiently and seamlessly over almost every region of our planet in fields such as air traffic management and maritime surveillance.

ESA has long worked in close cooperation with EUMETSAT, improving weather forecasts and climate studies with the Meteosat and MetOp series – new versions of both satellites are in preparation.

Data from these satellites will be displayed alongside examples of maps to assist disaster management authorities, produced under the International Charter on Space and Major Disasters.  This ground-breaking agreement was co-founded with many other space agencies by ESA in 2000, to make near-realtime satellite data available to civil protection agencies around the world.

The Pavilion will present images from the first of the Sentinel series of satellites launched on 3 April, under the ambitious EU Copernicus initiative.  This will benefit Europe’s citizens and decision-makers by providing access to accurate, timely information in order to manage the environment, understand and mitigate the effects of climate change, and ensure civil security.

The exhibition will highlight how breakthroughs in technology and science have brought us greater knowledge of the Universe, of our planet and its unique place in the Solar System.

Because of its physical similarities with Earth, Mars is a primary target for the search for life in the Solar System. A simulated Mars terrain will feature scale models of the three elements of ExoMars, ESA’s next mission to the Red Planet in cooperation with the Russian space agency.

A special area will present ESA’s ambitious Rosetta mission that will attempt to rendezvous with comet Churyumov–Gerasimenko and set a lander on its surface later this year, to help understand if these mysterious objects brought life to Earth.

An impressive display will show the results from the Planck mission, the most detailed map ever created of the Cosmic Microwave Background – the relic radiation from the Big Bang.

Planck is providing the most accurate values on the age, composition and expansion rate of the Universe, and is painting a new picture that is pushing us to the limits of understanding current cosmological theories.

Results from the four Earth Explorer satellites already launched will be on display. These address the most urgent questions facing Earth sciences: CryoSat is measuring the volume of Earth’s land and sea ice, GOCE studied Earth’s gravity, SMOS is providing data on ocean salinity and soil moisture, and the Swarm constellation is carrying out an unprecedented study of Earth’s magnetic field.

The space pavilion will highlight cutting-edge space technology developed in Europe, and in particular in Germany, now flying on the International Space Station, and innovative scientific results from experiments carried out in ESA’s Columbus and other laboratories.

ESA astronaut Alexander Gerst will fly to the Station for a long-duration mission the week after ILA, reinforcing the importance of Europe’s role in this unique international partnership.

The fifth and final Automated Transfer Vehicle supply vessel, to be launched in July, will displayed together with the European Service Module that will rely on ATV technology to power NASA’s Orion spacecraft that will carry astronauts beyond low Earth orbit.

Throughout the week, the space pavilion will host a number of presentations and events, including a dedicated Space Day conference on Thursday 22 May.

ILA is open to trade visitors from Tuesday 20 to Thursday 22 May and to the general public from Friday 23 to Sunday 25 May.