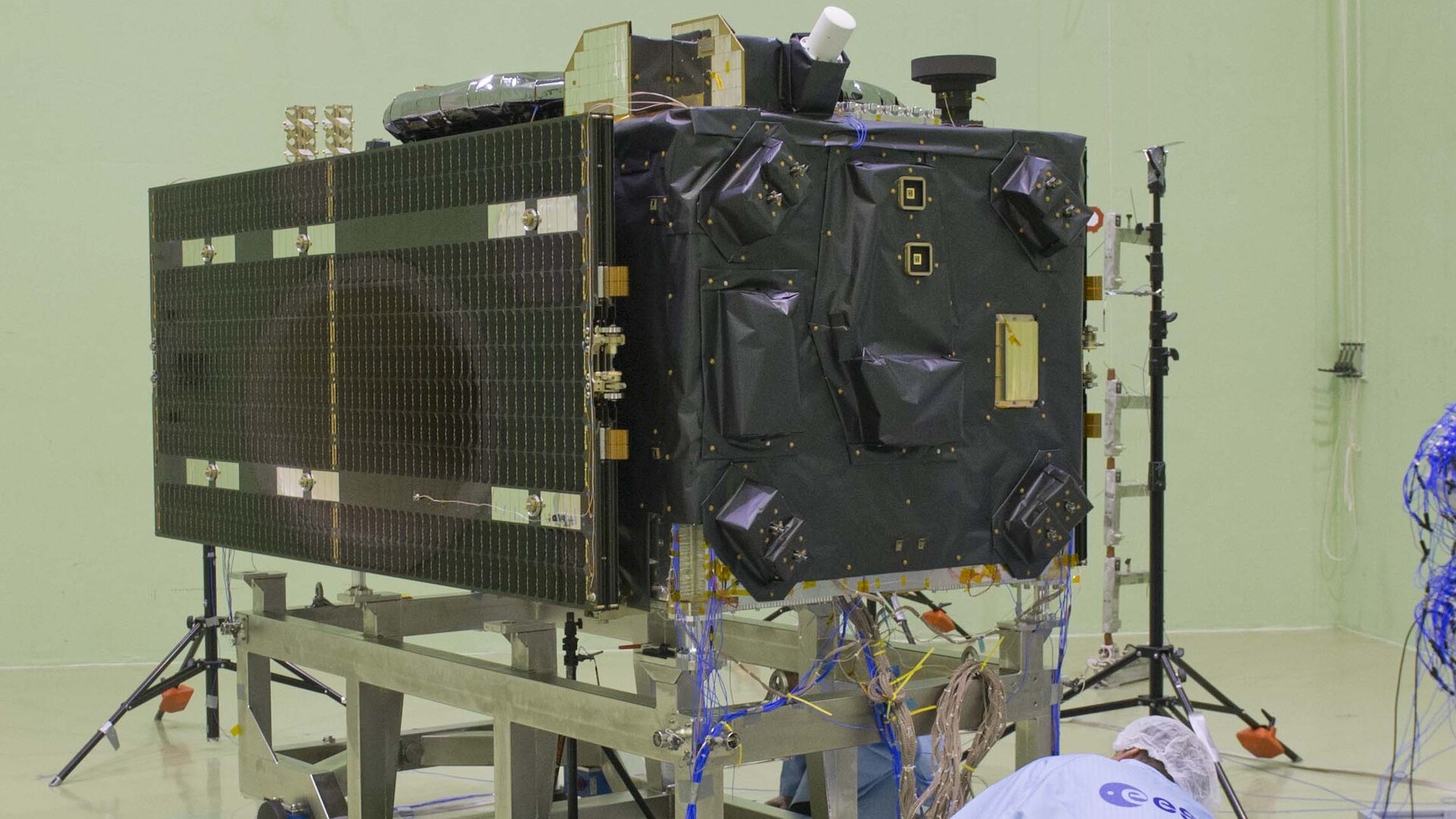 There might seem to be a hole in the side of this Galileo satellite – in fact its folded solar wings are simply reflecting a noise horn in the wall, about to recreate the deafening roar of a rocket lifting off.

Anyone witnessing a rocket launch will be struck by the noise levels, even when observing from several kilometres away. A satellite on top of its launcher is exposed to much higher levels, of course. So testing is essential to ensure that the satellite structure can withstand such a sustained loud sound.

The satellite was placed in the Large European Acoustic Facility, LEAF, effectively the largest sound system in Europe. A quartet of noise horns are embedded in one wall of this 11 m wide by 9 m deep and 16.4 m high test chamber.

Noise is generated by passing a carefully modulated flow of gaseous nitrogen through the horns, following the predetermined test profile – this inert gas selected to avoid any contamination of any delicate onboard systems, the satellite having been placed in flight configuration for the purpose of the test.

“The acoustic noise level reached during the test was 140.7 decibels, about the same noise as standing 25 m away from a jet taking off,” explained Georg Deutsch of European Test Services, the company operating the Test Centre for ESA.

“This involved a maximum liquid nitrogen flow in this case of 3.5–4 kg per second. Liquid nitrogen delivered by tanker is vaporised to pass through the horns. More or less, we were able to finish this test campaign with one full tank of liquid nitrogen – about 18.5 tons.”

Once the massive door of the LEAF is closed, its 0.5 m-thick steel-reinforced concrete walls serve to safely contain the sound. These are coated in turn with thick epoxy resin whose reflectivity increases internal reverberation.

The chamber itself is supported on rubber bearing pads to isolate it from its surroundings.

The Galileo satellite itself was similarly isolated – its support structure being borne on air-based ‘vibration isolators’ to make sure any vibration that ensues is due to direct acoustic noise as opposed to resonance from the ground.

The satellite had to be fitted with dozens of accelerometers to detect internal vibration – large items such as batteries are most prone. The blue cables shown relay accelerometer data. It was also surrounded with microphones to check the acoustic noise around the satellite followed the planned profile, providing around 250 data channels in all.

This second FOC satellite arrived at ESTEC on 9 August from manufacturer OHB in Bremen, Germany.

This first Galileo FOC satellite has since had its delicate solar wings removed as part of its preparation for ‘thermal vacuum’ testing. It will stay in a vacuum chamber for weeks on end and be subjected to the same temperature extremes it will experience in orbit.

Once unboxed, the second FOC satellite will undergo a similar acoustic testing and then a ‘System Compatibility Test Campaign’ will be performed, linking it up with the Galileo Control Centres in Germany and Italy and ground user receivers as if it was already in orbit.