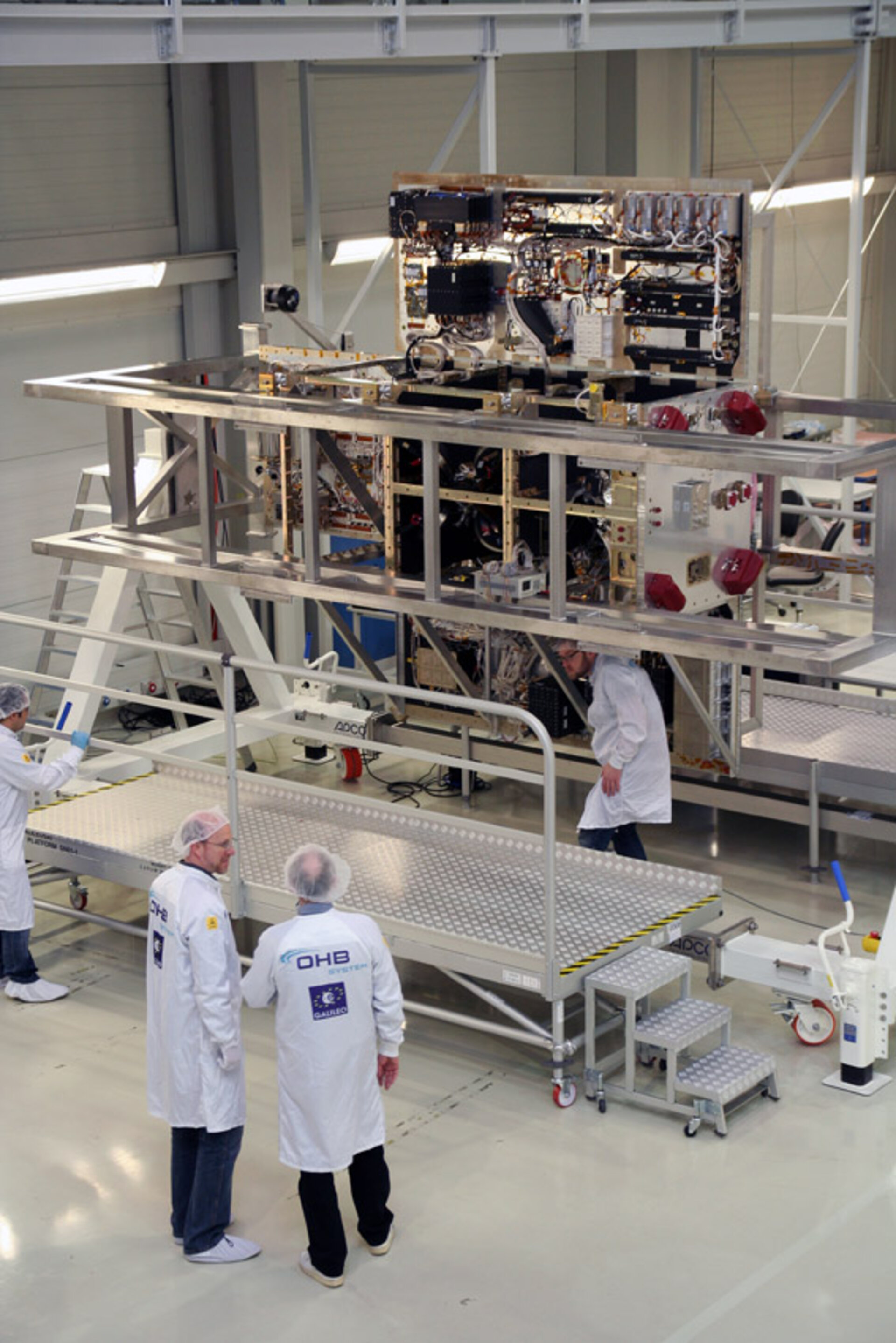 Its two halves took shape in separate nations, but the first Galileo Full Operational Capability satellite has now been assembled at OHB in Bremen, Germany, to be made ready for testing.

Developed under ESA contract, this is the first of 22 Full Operational Capability (FOC) satellites to be built, and it is scheduled to be ready for delivery to the Agency by the end of this year.

“We are very proud to have reached this important milestone after only 27 months from the programme’s start in January 2010,” stated Marco R. Fuchs, OHB CEO.

“We are looking forward to finalising the test programme and then to transfer the satellite to the environmental test campaign.”

These FOC satellites follow on from the initial four Galileo In-Orbit Validation satellites, the first two of which went into orbit on 21 October 2011 with the remaining two joining them on 28 September 2012

As prime contractor for the FOC satellites, OHB is responsible for developing the satellite platform and integrating the satellite with its payload – the part of the satellite that provides Galileo’s precision positioning measurements and services to users worldwide – developed at Surrey Satellite Technology Ltd in Guildford, UK (also providing assistance to OHB with final satellite assembly).

SSTL delivered its first completed payload to OHB in April, and both companies have set up series production facilities to prepare the remaining satellites.

At OHB, construction of the second FOC flight satellite platform has begun and pre-assembly work on the third is already under way.

The full Galileo system will consist of 30 satellites in orbit overseen by control centres located in Europe and a global network of sensor stations and uplink stations.

Each satellite combines the best atomic clock ever flown for navigation – accurate to one second in three million years – with a powerful transmitter to broadcast precise navigation data worldwide.

The Galileo programme is structured in two phases, with the initial In-Orbit Validation phase consisting of deployment tests and the operation of four satellites and their associated ground infrastructure.

This is followed by the FOC phase, consisting of the deployment of the remaining ground and space infrastructure.

The definition phase and the development and In-Orbit Validation phase of the Galileo programme were carried out by ESA and co-funded by ESA and the European Commission.

The FOC phase of the Galileo programme is managed and fully funded by the European Commission. The Commission and ESA have signed a delegation agreement by which ESA acts as design and procurement agent on behalf of the Commission.