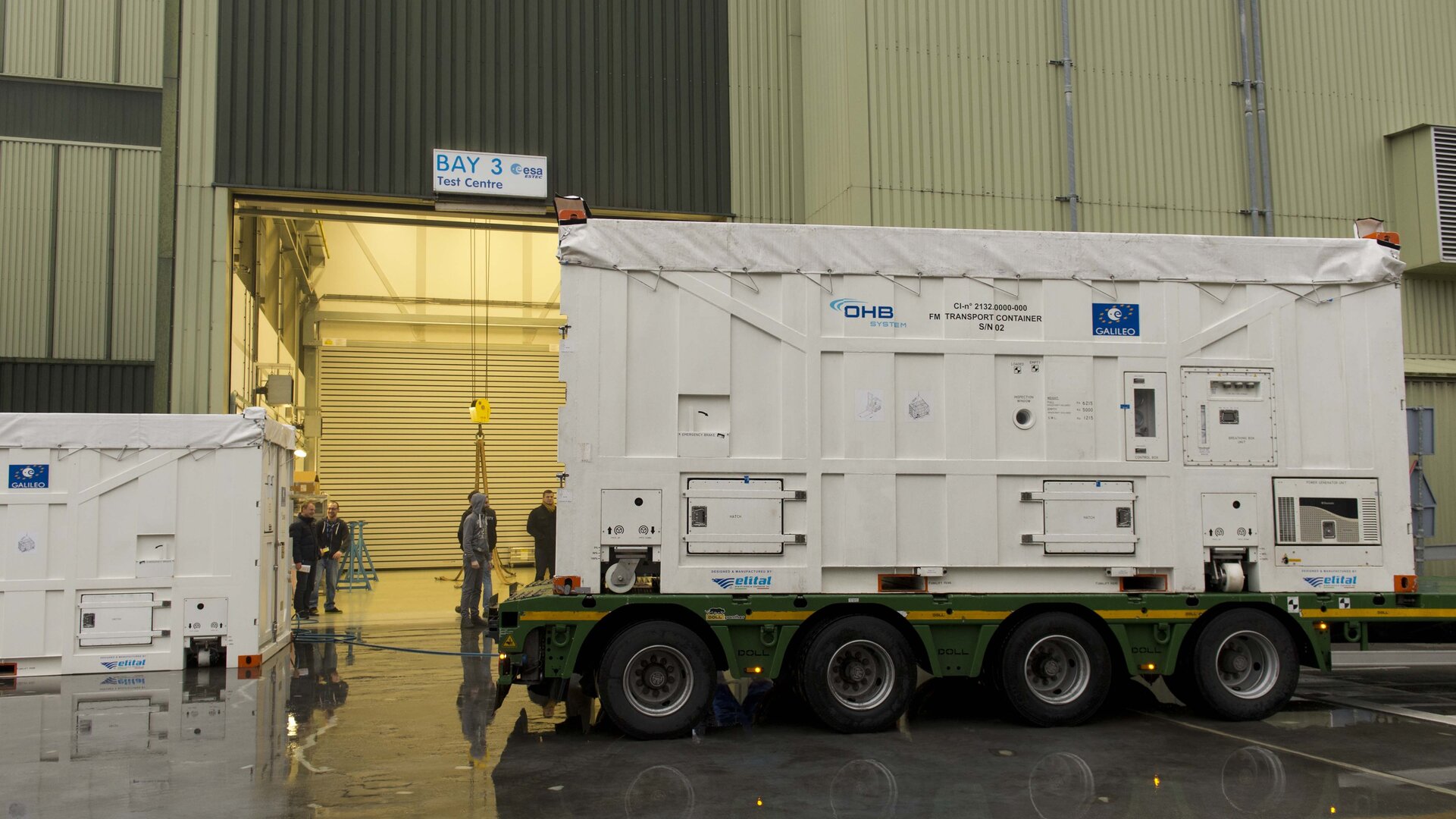 The satellite was carried by lorry from its manufacturer in Germany, cocooned within an environmentally controlled container.

It arrived inside the cleanroom environment of ESA’s technical centre, ESTEC, in the Netherlands, last Thursday afternoon. The container was then opened up to begin preparations for testing.

The first six Galileo satellites are already up in orbit, launched in pairs in 2011, 2012 and August this year.

The last pair was delivered into the wrong orbit by a faulty upper stage, but the fifth satellite’s orbit has since been changed to allow checking of its navigation payload, which began at the end of November.

Meanwhile, down on the ground, production of further satellites continues steadily, taking the Galileo series into double figures overall.

Following on from the first four In-Orbit Validation satellites, 22 of these Full Operational Capability satellites are being built by OHB in Bremen, Germany, with navigation payloads from SSTL in Guildford, UK.

Numbered Flight Model 6, or FM06 for short, this latest of the newer satellites is now reunited under the test centre’s roof with three others.

FM03 and FM04 have completed their acceptance testing, culminating in the weeks-long ‘thermal­vacuum’ test. Each satellite was subjected to the same vacuum and extreme temperature conditions experienced in orbit, as well as radio-frequency testing of their navigation payloads and antennas inside an anechoic chamber isolated from the external universe.

This pair is now in storage in the centre pending the results of their concluding acceptance review.

The other satellite, FM05, recently ended its own thermal–vacuum trial. It is now being reconfigured for radio-frequency testing, planned to take place after the Christmas break.

The latest unboxed Galileo satellite will undergo its own thermal–vacuum test in January.

ESTEC is an essential stop on the way to space for Galileo. It is equipped with all the facilities needed to simulate space conditions under a single roof, including an acoustic chamber, earthquake-strength shaker tables, and anechoic and vacuum chambers, along with a range of specialised measuring equipment.

Once ESTEC gives the satellites its stamp of quality then they are in principle ready to be flown to Europe’s Spaceport in Kourou, French Guiana. ESA and the European Commission are currently deciding on the launch schedule for these next Galileos.