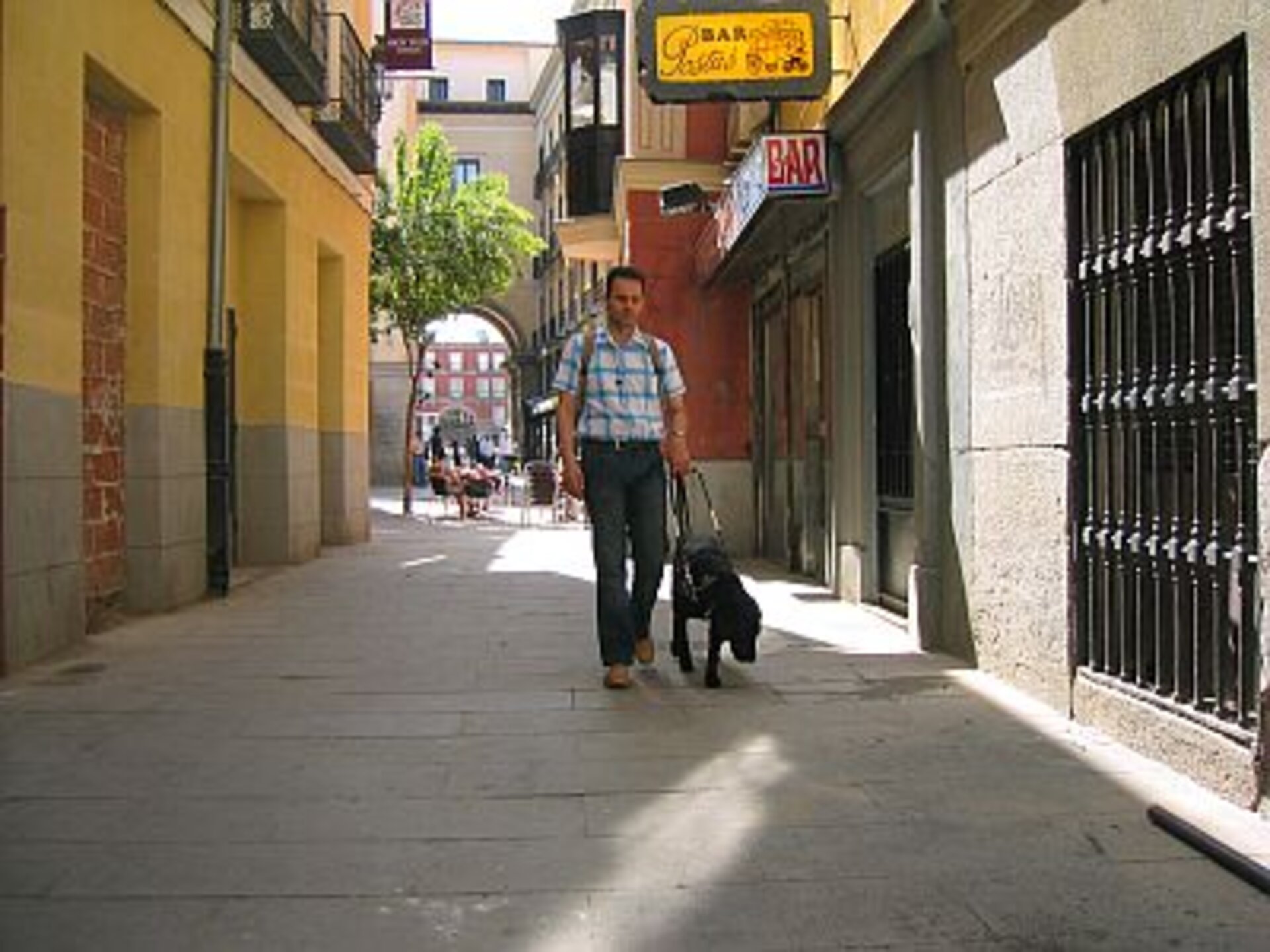 A prototype satellite navigation system accurate enough to direct vision-impaired pedestrians to their destination has recently been successfully demonstrated in Madrid.

Seen from a distance, a blind man guided by his dog in the streets of Madrid seems quite sure of his way. In fact, he is not listening to music with his headphones but receiving directions to his destination: "turn to the right, turn to the left, continue straight ahead…" Thanks to a mobile phone combined with a position receiver and a voice synthesizer, he can walk confidently through the city while being guided by satellite.

Developed by ESA, with the Spanish firm GMV Sistemas, this device offers greater autonomy for the visually impaired. The system is not intended to replace a white cane or a guide dog but to complement them with an ‘audible map’. The user no longer needs to seek frequent guidance from other pedestrians; the guidance equipment follows his every move and advises him accordingly.

This system, designed with the advice of the Spanish National Organisation for the Blind (Organisacion Nacional de los Ciegos de España -ONCE), is based on EGNOS, a positioning system that processes GPS data to provide improved accuracy. This is rather important for a blind person, since a one metre localisation accuracy makes the difference between being on the path or in the road.

Additionally, EGNOS, a preparatory programme for Galileo, offers a guarantee of quality of service. This continuity is reinforced by another system being developed in parallel by ESA: SISNeT (Signal In Space via Internet). In an urban environment, buildings often prevent or interfere with reception of satellite signals. SISNeT overcomes this problem by providing data via the Internet.

In this application for the visually impaired, the processing of the positional data is performed by a central computer that then sends back information to the user. A handicapped pedestrian might be given directions to follow after programming his or her destination into the device.

The project is currently in a demonstration phase and the receiver exists only in prototype form. ESA, GMV Sistemas and ONCE intend to continue their work so as to develop a single device that will integrate all three technologies: an EGNOS/SISNeT receiver, a pocket computer and a mobile phone.

EGNOS, a joint project of ESA, the European Commission and Eurocontrol, consists of a network of around 40 ground stations scattered throughout Europe designed to record, adjust and improve data from the American GPS system. The modified signals are relayed by geostationary satellites to the receivers of system users. In contrast to the 15-20 metre accuracy offered by GPS, the European system is accurate to less than two metres, and unlike GPS (a military system), the European version offers guaranteed signal quality.

EGNOS, which is currently in pre-operational service, is Europe’s first step in satellite navigation as it prepares for Galileo, which will be the first fully operational civilian navigation system, with a network of 30 satellites.