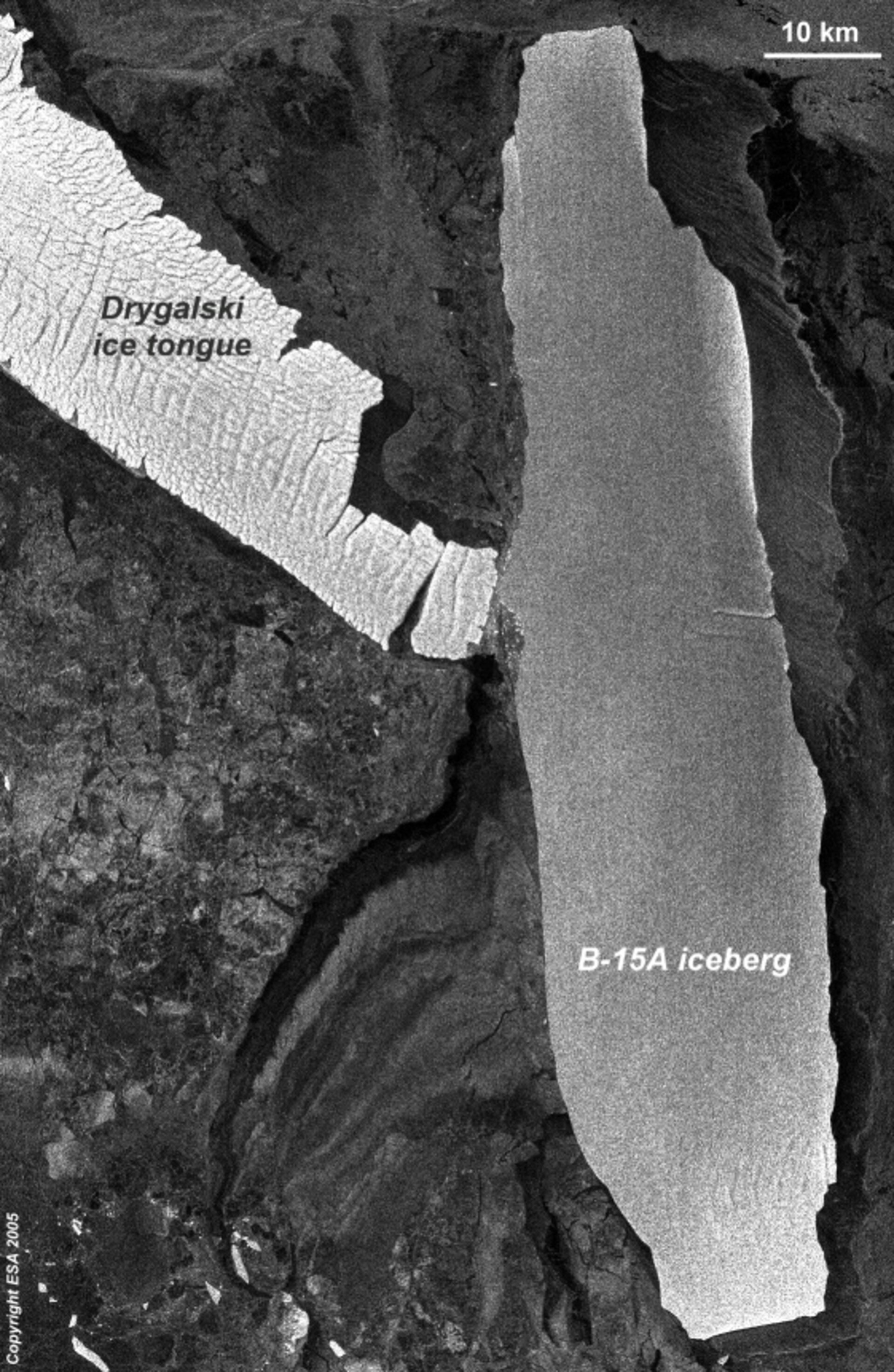 Maps of Antarctica need to be amended. The long-awaited collision between the vast B-15A iceberg and the landfast Drygalski ice tongue has taken place. This Envisat radar image shows the ice tongue – large and permanent enough to feature in Antarctic atlases - has come off worst.

An image acquired by Envisat on 15 April 2005 shows that a five-kilometre-long section at the seaward end of Drygalski has broken off following a collision with the drifting B-15A. The iceberg itself appears so far unaffected. With more than half the iceberg still to clear the floating pier of ice, Drygalski may undergo more damage in coming days.

It is an old philosophical paradox: what happens when an irresistible force meets an immovable object? For the past few months, ESA's Envisat satellite has been watching an answer play out in ice, as the B-15A iceberg converged on the Drygalski ice tongue.

The sheer scale of B-15A is best appreciated from space. The bottle-shaped Antarctic iceberg is around 115 kilometres long, with an area exceeding 2500 square kilometres, making it about as large as the entire country of Luxembourg.

From January the iceberg has been drifting towards, then past, the 70-kilometre-long Drygalski ice tongue in McMurdo Sound on the Ross Sea. In the last month prevailing currents have been slowly edging B-15A along past the northern edge of Drygalski.

Envisat's Advanced Synthetic Aperture Radar (ASAR) instrument has been monitoring events since the start of the year, gathering the highest frequency weather-independent satellite dataset of this area ever.

B-15A is the largest remaining section of the even larger B-15 iceberg that calved from the Ross Ice Shelf in March 2000. Equivalent in size to Jamaica, B-15 had an initial area of square kilometres but subsequently broke up into smaller pieces.

Since then, the largest piece - B-15A - has found its way to McMurdo Sound, where its presence has blocked ocean currents and led to a build-up of sea ice. With the Antarctic summer now at an end and in-situ observations therefore limited, the ASAR instrument aboard Envisat becomes even more useful for monitoring changes in polar ice and tracking icebergs.

Its radar signals pass freely through the thickest polar storm clouds or local darkness. And because ASAR is sensitive to surface texture as well as physical and chemical properties, the sensor is extremely sensitive to different types of ice – for example clearly delineating the older rougher surface of the Drygalski ice tongue and iceberg B15A from the surrounding sea ice pack.

The Drygalski ice tongue is located at the opposite end of McMurdo Sound from the US and New Zealand bases. The long narrow tongue stretches out to sea as an extension of the land-based David Glacier, which flows through coastal mountains of Victoria Land.

ASAR GMM images are routinely provided to a variety of users including the US National Oceanic and Atmospheric Administration (NOAA) National Ice Centre, responsible for tracking icebergs worldwide.

ASAR imagery is also being used operationally to track icebergs in the Arctic by the Northern View and ICEMON consortia, which provide ice monitoring services as part of the Global Monitoring for Environment and Security (GMES) initiative, jointly backed by ESA and the European Union.

This year also sees the launch of CryoSat, a dedicated ice-watching mission designed to precisely map changes in the thickness of polar ice sheets and floating sea ice.

CryoSat, in connection with regular Envisat ASAR GMM mosaics and SAR interferometry – a technique used to combine radar images to measure tiny centimetre-scale shifts between acquisitions - should answer the question of whether the kind of ice-shelf calving that gave rise to B-15 and its descendants are a consequence of ice sheet dynamics or other factors.

Together they will provide insight into whether such iceberg calving occurrences are becoming more common, as well as improving our understanding of the relationship between the Earth's ice cover and the global climate.