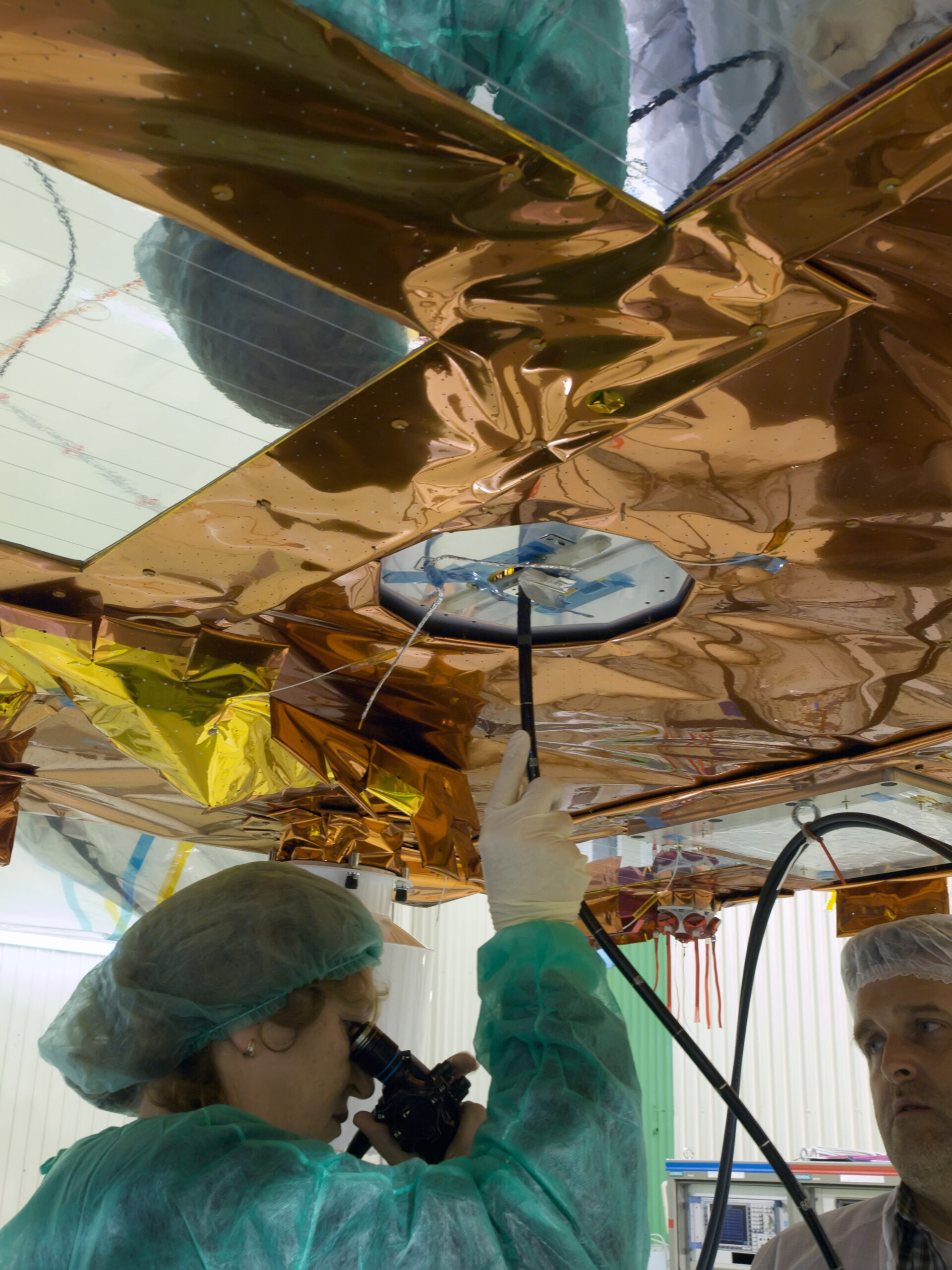 29 January 2010 – The task of preparing a satellite for launch does not always go according to plan, as the launch campaign team in Baikonur has just experienced. Encountering a tricky problem, an ingenious solution was found by calling on the services of a local medical surgeon.

Scheduled to be launched on 25 February, ESA’s CryoSat-2 Earth Explorer satellite is undergoing testing at the launch site in Baikonur, Kazakhstan. However, during the course of the testing programme the team found that there was a serious drop in power from the antenna that will be used to send the precious data back to Earth. In fact, the power was very unstable, at times dropping to one thousandth of what it should be, which flummoxed the team.

The team concluded that the lost power had to be going somewhere, and therefore must be heating something up. What they needed was a thermal imaging camera to see where this could be happening – though this is not part of the normal support equipment used in a launch campaign.

The Russian staff working at the launch facilities pulled out all the stops and remarkably managed to source a new compact thermal imager. Now with the aid of the camera, a 'hot spot' was detected in a 'waveguide' – a narrow tube leading to the antenna, right inside the satellite.

Under the assumption that something was lodged in the tube-like waveguide, the antenna was subsequently removed but it was impossible to reach far into the satellite without taking it apart. Again the team’s Russian partners found the answer to this problem by calling on the local hospital for help. They came up with a surgeon and an endoscope.

So, in the same way a doctor looks inside a human body without opening up, surgery was performed on the CryoSat-2 satellite. The operation took several hours and required great skill and patience which the surgeon, dressed in her surgical gowns, graciously supplied. The delicate operation revealed that there was indeed something there and it was in two pieces.

The surgeon eventually managed to remove one of the offending objects, which turned out to be a piece of ferrite, a magnetic material. This wasn’t good news as it was obviously a piece of the satellite that had come loose, contrary to some speculation that it had been an enterprising spider. To get the second piece out, the Astrium team made a ‘magnet on a stick’ to draw the conical-shaped object along the tube while the surgeon guided the operation with the aid of the endoscope.

Although the objects had successfully been removed, there remained important questions. What was it that had come loose? Was it all accounted for? And, most importantly: did this require repair work that would mean there would now be a launch delay as a consequence?

More endoscopic examinations revealed that the conical ferrite piece had broken off from inside the advanced antenna. Presumably this was a result of sustained vibrations and jolts during transport.

The team reported that the Antonov flight from Munich was very smooth, but the three hours on a truck as the convoy moved within the cosmodrome from the airfield to the integration building was not. Despite limiting the maximum speed to 15 km/h, the trip was distinctly bumpy – the 40 minute bus trip the team takes to the integration building each morning provides a daily reminder of this.

The surgeon used her endoscope to show the satellite specialists that the inside of the waveguide was scrupulously clean, relieving one major worry.

Intensive consultations with specialists back in Europe revealed that the role of this troublesome ferrite piece was much like icing on a cake: the antenna would work fine without it, but it improved the already good performance to a level comfortably exceeding the specifications. It could safely be dispensed with.

So now it was necessary to go back and remove the base of the ferrite cone to prevent any further break up. The manufacturer developed, and sent overnight, a procedure on how the antenna should be dismantled – here the time difference between Europe and Kazakhstan proved beneficial. Removing the ferrite stump was tough work but the mechanical experts were skilled and managed to extract it. The antenna was reassembled.

"We were able to conclude that the ferrite load broke off during transport, when the antenna was pointed upwards, keeping the pieces in its cavity. When the satellite was rotated 180° into the test position, with the antenna pointed downwards, it fell into a set of cavities in the antenna, blocking the aperture," explained Richard Francis, ESA’s CryoSat-2 Project Manager.

"Later on, as we rotated the satellite during our investigations, it rolled much further into the waveguide beyond. Our satellite has now been discharged from 'Intensive Care' and has been through a battery of tests. We can confidently say that the patient has made a full recovery. We are now back on track and, since we were able to carry on with the testing programme in parallel, we have not lost any time and launch is still set for 25 February. This all goes to show the importance of testing everything before launch," Richard Francis added.