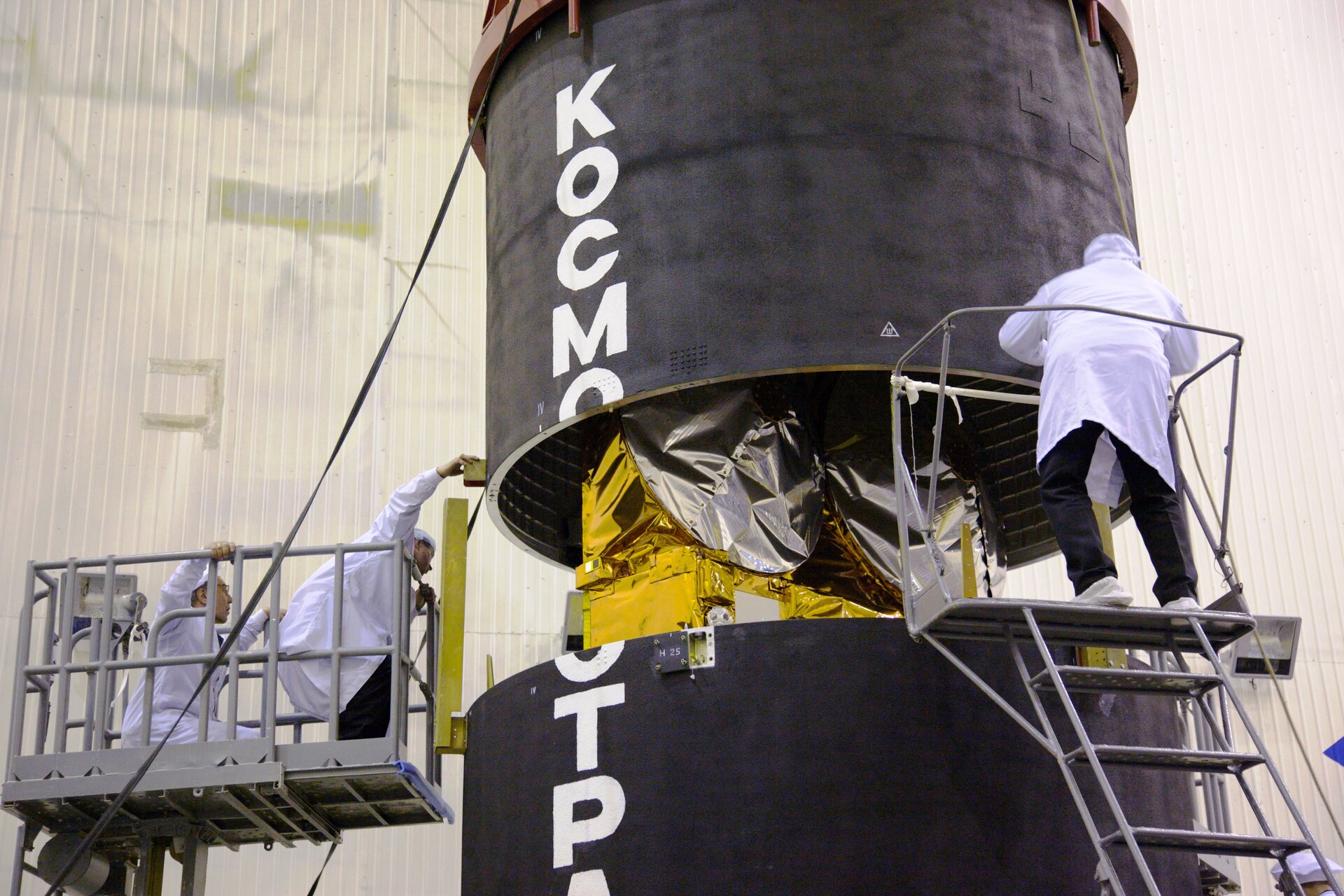 12 February 2010 – The team in Baikonur has just passed an important milestone in the campaign to prepare CryoSat-2 for liftoff – which is now just two weeks away.

CryoSat-2 was encapsulated in the Dnepr rocket 'space head module' yesterday. This involved lifting the satellite, already mated to the launch adapter, and placing it in the bottom half of the space head. Once CryoSat-2 was half encapsulated, all the last ‘red tag’ items were removed. Red tags are used to identify items that must be removed before encapsulation.

Following a careful check, the top half of the space head was lifted over the satellite and slowly brought down to meet the bottom half, signifying time for the team to say farewell to their ice satellite as it was slowly sealed from view.

This important step on the road to launch is the culmination of over three weeks of intensive work at the Baikonur Cosmodrome in Kazakhstan. The team did experience a hiccup at the end of January with the discovery that a piece of ferrite in the satellite’s X-band science-data transmission antenna had broken off during transport. However, the situation was successfully resolved with the aid of a surgeon and an endoscope. The performance of the antenna remains well within spec and since the team could carry on with other tests in parallel, there was no time lost in the campaign schedule.

Prior to encapsulation, the satellite’s main instrument, the Synthetic Aperture Radar (SAR)/Interferometric Radar Altimeter (SIRAL), was thoroughly tested, as was the Doppler Orbit and Radio Positioning Integration by Satellite (DORIS), which provides the exact location of the satellite. After testing, the team from Thales Alenia Space confirmed that the SIRAL was ready and the team from the French space agency CNES stated that the DORIS instrument was fit for flight.

In addition, the team from Astrium GmbH who testing the main satellite system could confirm that the satellite’s system for housekeeping, data collection and communications was ready. Throughout the campaign, the team have had to endure temperatures down to –25°C. The bus ride between the launch site, which is essentially a military base, and the hotel takes about 40 minutes. The bus leaves the hotel early in the morning and returns after sunset in the evening, so the team has seen very little natural light over the last weeks. The team did, however, have the opportunity to visit the Baikonur Cosmodrome Historical Museum on one day off.

With this phase of testing complete, permission could be given to fuel the satellite, so fuelling took place on 4 February. CryoSat-2 could fly around 1.5 billion km, if its planned lifetime of three-and-a-half years is extended by a further two years. The satellite uses around 36 kg of pressurised nitrogen as a propellant, which is stored in a pressurised tank at about 280 bars. The process of fuelling is another important step in the campaign and a relatively dangerous one.

With fuelling successfully completed, the next important task was to check that all the communication links between the satellite and mission control at ESA’s European Space Operations Centre in Darmstadt, Germany were working correctly.

The campaign then moved on to the encapsulation procedure, which first involved mating the CryoSat-2 satellite to the launcher adapter; a delicate operation that needs a lot of care and skill. The adapter is a crucial component as it acts as an interface between the satellite and the launcher. It comprises two parts, and it’s the separation of these two elements, by means of four ‘pryo bolts’, that allows the spacecraft to separate from the launcher in space. Since one part of the adapter remains fixed to the satellite, multi-layer insulation has to be applied.

Once the adapter had been prepared, the satellite was positioned on top by a crane, which was operated very skilfully. Interestingly, cranes in the integration facilities are often operated by women.

After a successful 'Flight Readiness Review', where a declaration is made that the satellite is read for flight, the process of encapsulation could begin.

Now sealed within the space head module of the Dnepr, there are a few more procedures the launch site staff have to carry out before the upper stage is transported by 'crocodile' – a huge lorry specialised for carrying this upper stage – to the launch pad.