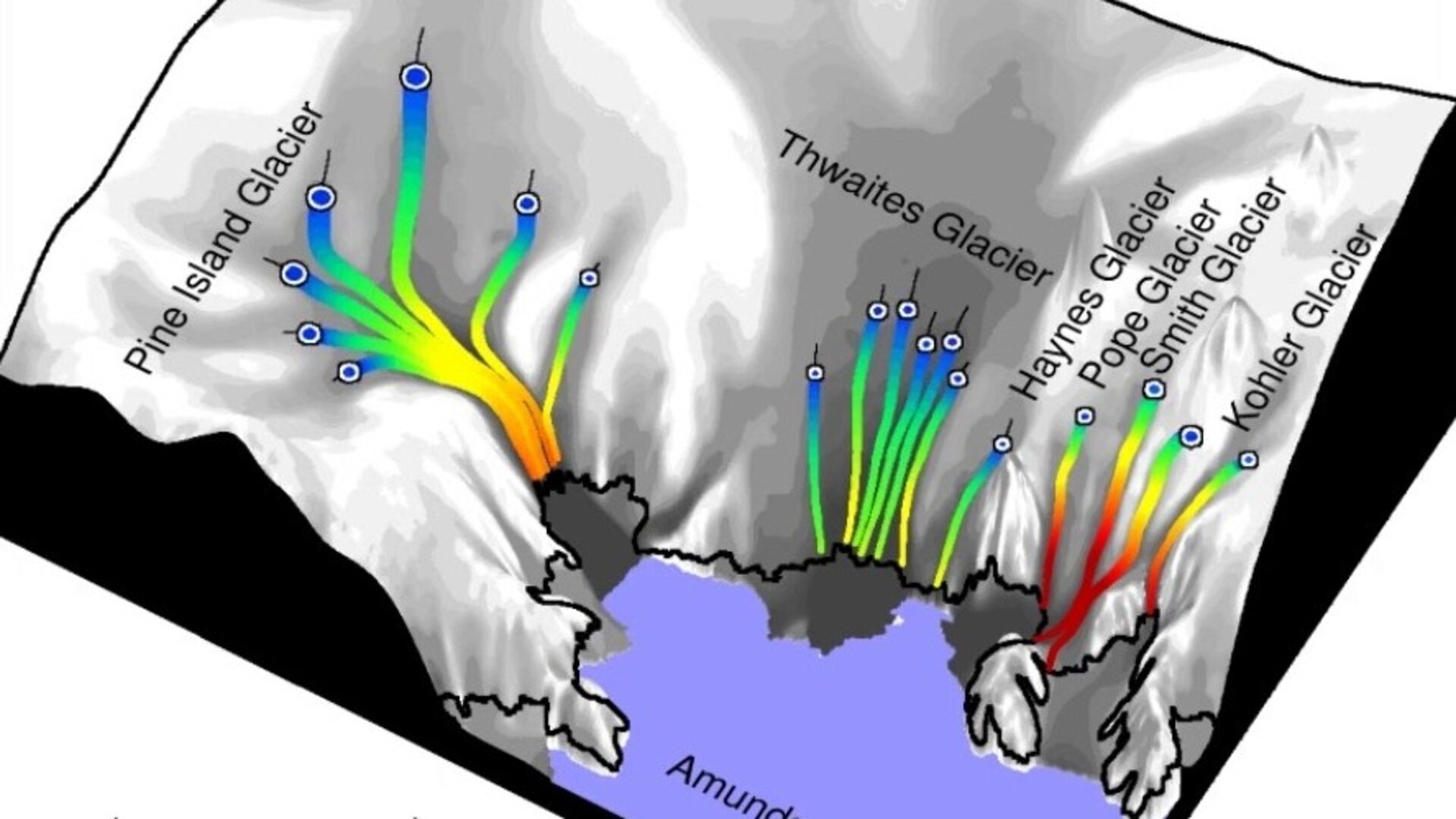 Five satellites spanning two decades have revealed variations in the timing and pace of glacial retreat in West Antarctica. Some glaciers’ thinning spreads up to three times faster than on neighbouring tributaries, and was offset by decades.

The glaciers flowing into the Amundsen Sea have been drastically losing ice, likely due to rising sea temperatures recorded around Antarctica in recent decades.

The Pine Island Glacier is known to contribute more to rising sea levels than any other ice stream on the planet, and the neighbouring Thwaites and smaller Pope, Smith and Kohler Glaciers are also losing ice.

But the rate at which these glaciers are melting varies between them, despite their relative vicinity. Possible reasons for this include differences in glacier catchment size, bedrock, topography and hydrology. 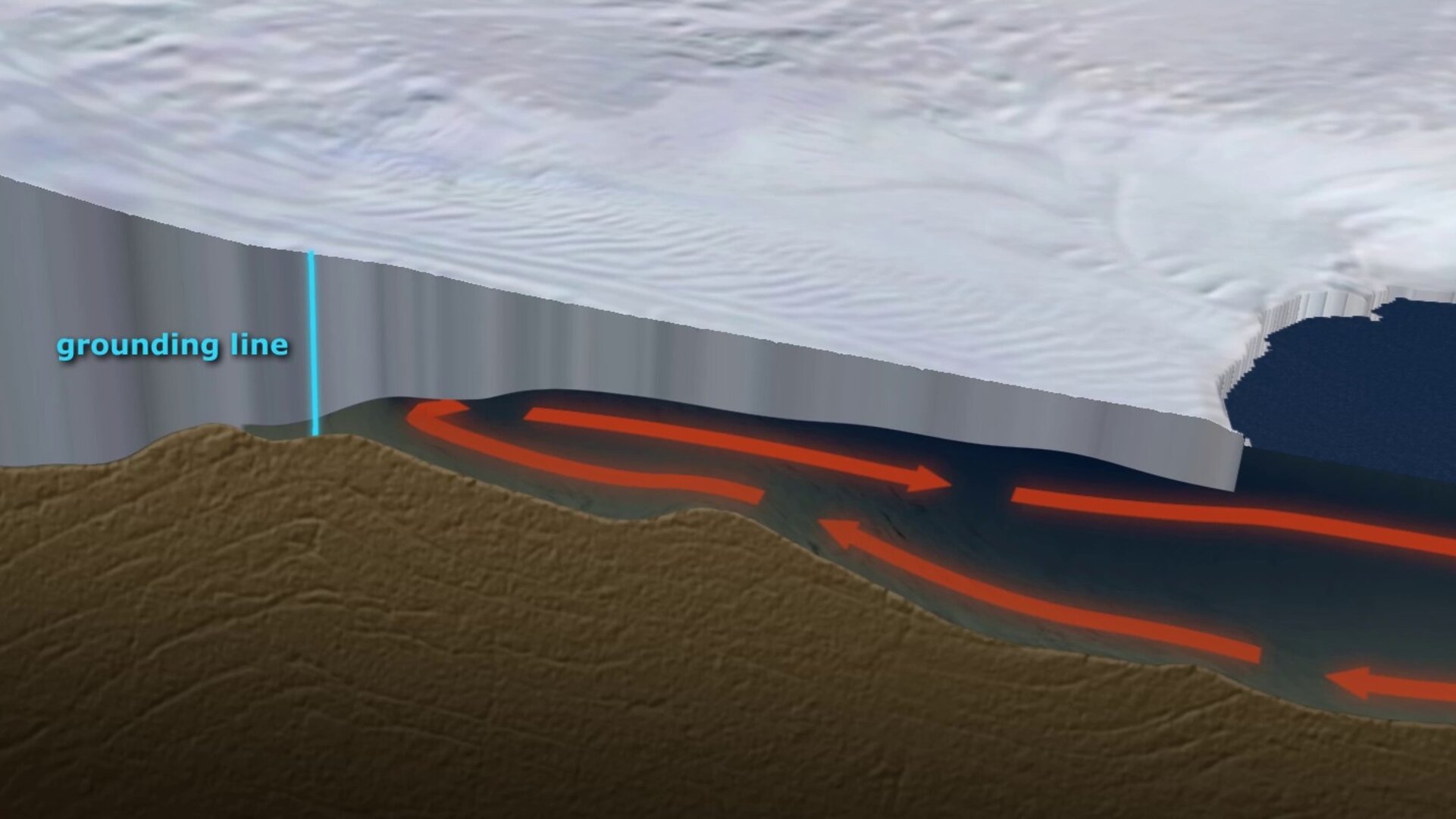 What remains clear, however, is that over the past 25 years, all three have seen thinning from the grounding line – where the ice stream lifts up off the land and begins to float out over the ocean – across the glacier surface.

“Scientists generally agree that it is warm ocean water that melts the floating part of the glacier, which then allows the glacier to flow more easily because it’s no longer held back by the floating ice shelf. As the glacier flows faster, it starts to become thinner,” said Dr Hannes Konrad, lead author of the study published in Geophysical Research Letters.

“If there’s not enough snow and ice accumulating higher up to compensate, the glaciers lose more and more of their mass as they flow towards the sea, and that’s exactly what we are seeing here, but the detail varies considerably between the three systems, and even within each glacier.”

Using data dating back to 1992 from the ERS-1 mission, together with information from ERS-2, Envisat, CryoSat and NASA’s IceSat, scientists from the UK’s Centre for Polar Observation and Modelling reconstructed surface heights along a series of glacial flowlines to see how thinning at the grounding lines had been passed further inland.

In 1992, all three were already experiencing height loss at or near the grounding line, with Pine Island Glacier losing height by around 1 m every year – although  the interior surface was stable.

Thinning then spread steadily, first up the glacier’s main trunk, and then further inland.  While the pace at which it spread across the surface varied, rates of thinning reached up to 13 km/year.

Changes at Thwaites Glacier were more erratic. The surface at the grounding line was already falling by up to 3 m/year in 1992, but thinning ceased around 2000.  In 2004, thinning continued and spread at similar rates to those seen at Pine Island Glacier, but the offset of about 10 years means that it did not spread as far inland.

The Pope, Smith and Kohler Glaciers experienced the largest falls in surface height of up to 7 m/year, most likely beginning before the data record. The thinning spread much more slowly than at Pine Island Glacier or Thwaites Glacier.

“As well as being able to routinely monitor the polar ice sheets as a whole, these results show the ability of satellites to pinpoint how individual glaciers are responding to environmental change,” said CPOM Director Professor Andy Shepherd.

“The next steps are to refine our calculations of ice loss and sea level rise from the Antarctic ice sheet as a whole, and, in turn, improve our models of what might happen in the future.”

The study is being presented today at the American Geophysical Union’s Fall Meeting held in San Francisco, USA.