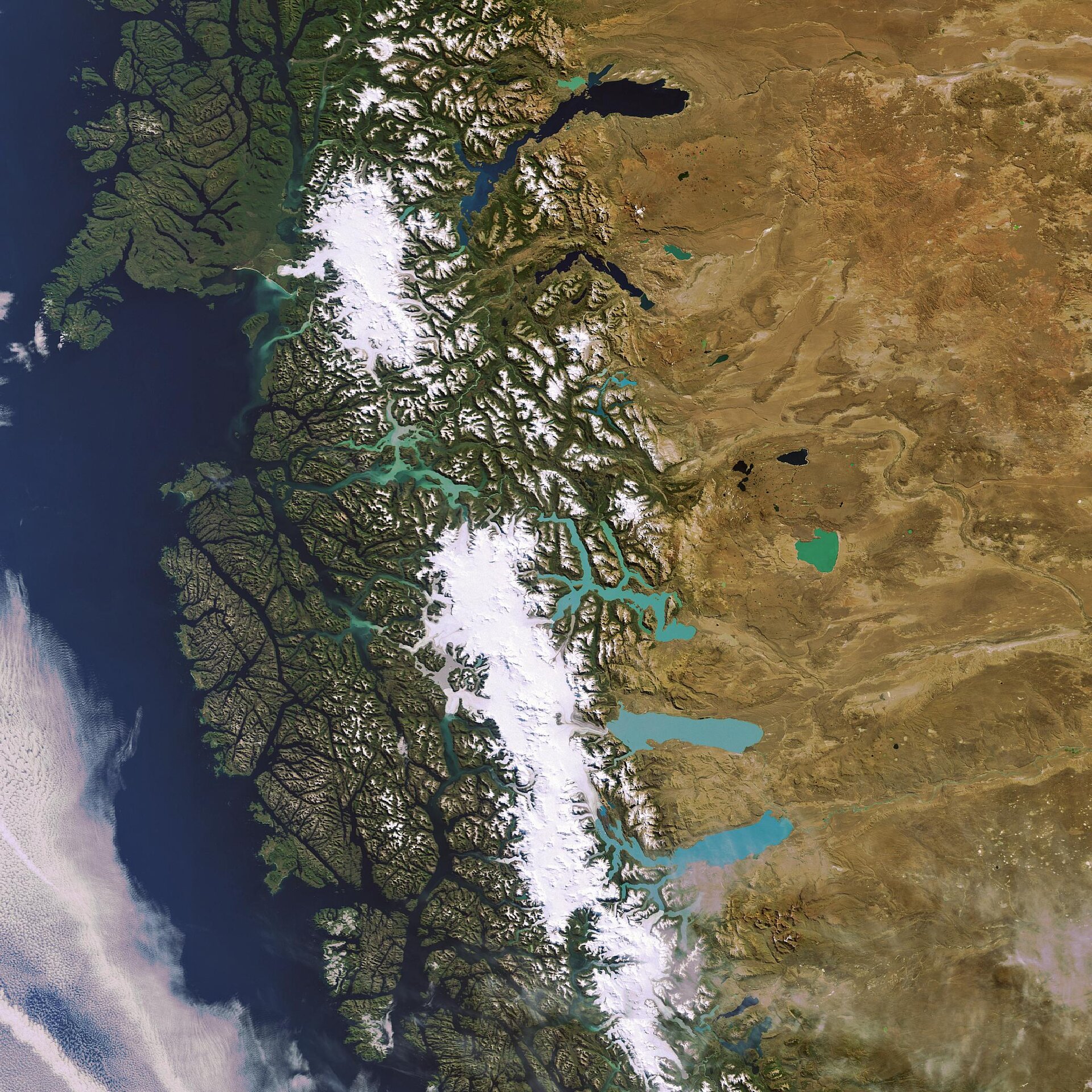 The Andes Mountains (stretching down the centre of the image) form a natural boundary between the two South American countries and are responsible for the high contrast in landscape.

Argentina’s Los Glaciares National Park, named a UNESCO (United Nations Educational, Scientific and Cultural Organisation) World Heritage site in 1981, is situated in the area around the two large glacial lakes just beneath the centre of the image. The park is named after the glaciers located in the Southern Patagonian Ice Field – the largest ice mass in the Southern Hemisphere.

The majority of the nearly 50 big glaciers fed by the Patagonian Ice Field in the park have been retreating during the last 50 years. The 30-km-long Perito Moreno glacier, the most famous glacier in the park because of its rupture process, is one of the few not retreating or advancing but rather in equilibrium, going through cycles of retreats and advances.

Located on a narrow channel that separates the main body of Lake Argentino (the large lake seen near the bottom of the image above) from its southern arm (Brazo Rico), Perito Moreno forms an ice dam when it advances to the extent that it reaches the land on the other side of the channel, creating two separate bodies of water.

Once the dam is formed, water and ice commence a kind of duel: water from melting glaciers drain into the trapped section of lake, and the force of the rising waters inevitably becomes too much and the ice dam gives way to crushing lake waters trapped behind it, finally breaking apart. This process first occurred in 1917, submerging a several-hundred-year old forest, and has occurred some twenty times since then.

The three large turquoise lakes visible on the Eastern side of the ice field in the satellite image (from top to bottom) are Lake O’Higgins, Lake Viedma and Lake Argentino – the biggest lake in Argentina with a surface area of nearly 1500 square kilometres. Their unique colour is attributed to ‘glacier milk’, suspended fine sediment produced by the abrasion of glaciers rubbing against rock.

This image was acquired on 15 March 2007 by Envisat’s Medium Resolution Imaging Spectrometer (MERIS) instrument while working in Full Resolution mode.