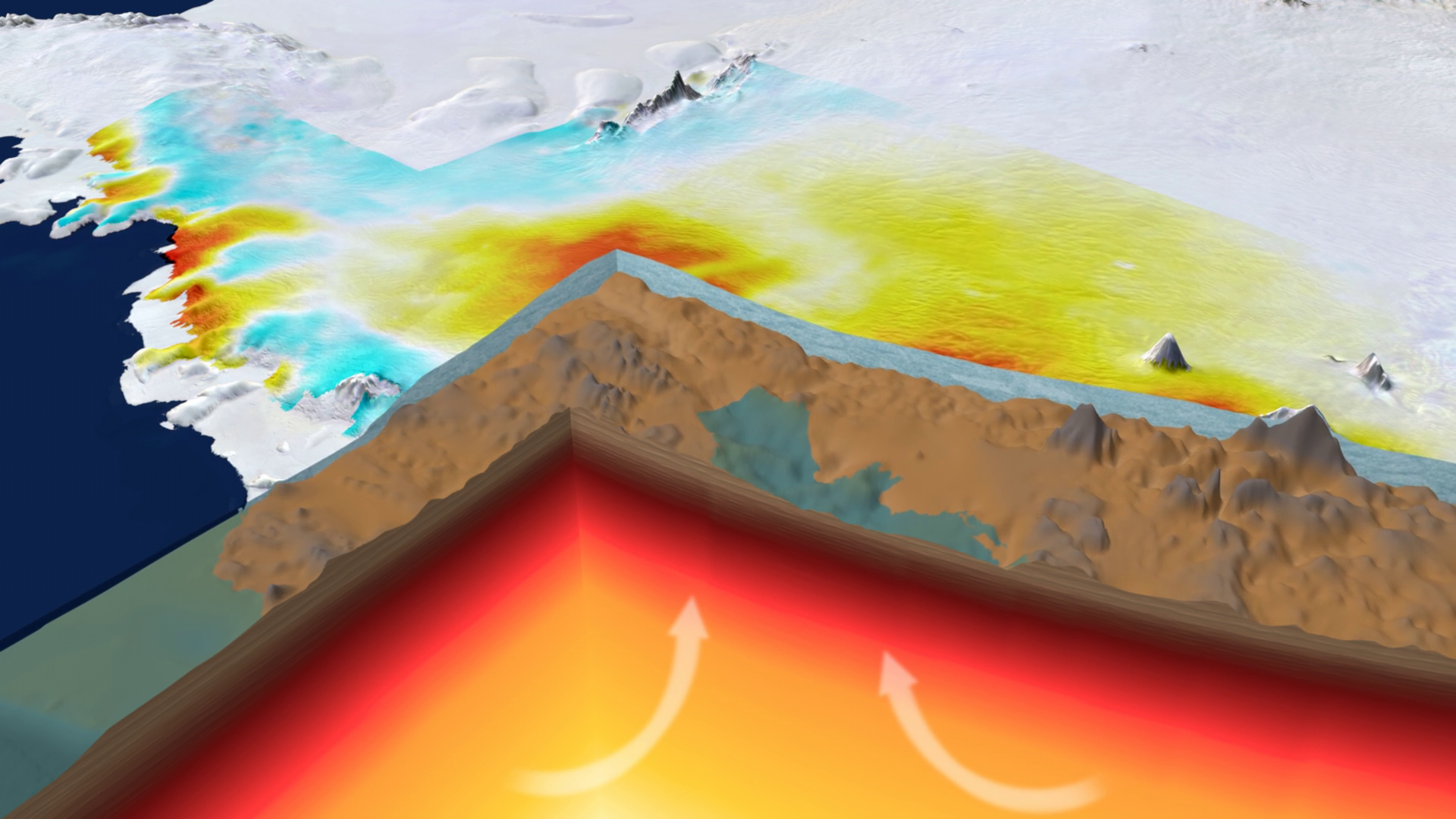 Parts of Earth’s crust are rising very slowly owing to post-glacial rebound, but using GPS, researchers have found that West Antarctica is rising faster than almost anywhere else in the world. And, ESA’s GOCE gravity mission has, in turn, helped them to understand that the mantle below is unusually fluid.

Around 20 000 years ago, vast expanses of Earth’s surface were covered in thick ice. In some places the ice was 3 km thick – just like central Antarctica and Greenland today.

Earth’s hard rocky crust sits on top of the mantle. The mantle layer, which is some 2900 km-thick, is relatively soft and behaves like a viscous fluid that allows the crust, when weight-laden with thick ice, to be pushed down.

It is estimated that during the Ice Age, land below the thickest ice sunk by as much as 500 m.

When the ice eventually melted and Earth’s surface was relieved of the weighty burden, the crust rose again, first very quickly owing to an elastic rebound effect, and then much slower.

This process continues today, but the rate of rise, however, varies from place to place.

Valentina Barletta from National Space Institute at the Technical University of Denmark, and who led the recent research, explains, “When the ice melts and gets thinner, Earth re-adjusts and immediately rises by a few millimetres, depending on the amount of ice lost.

“Earth acts a bit like a hard memory-foam mattress. It re-adjusts slowly for several thousand years after the melting. In Scandinavia, the bedrock is rising by about 10 mm a year.”

Although Antarctica is still covered with thick ice, it too is on the rise.

The paper published in Science explains how scientists used data from GPS stations to reveal that the Amundsen Sea Embayment in West Antarctica is rising by up to 41 mm per year, one of the fastest rates ever recorded in glaciated areas.

In comparison, GPS in Greenland record uplift of up to 30 mm per year, but this is caused by the immediate elastic spring-like rebound.

The unusually fast bedrock rise in West Antarctica has led to new insight into the structure of the mantle below.

While GPS offers information about rates of uplift, the GOCE mission provided measurements to generate a model of Earth’s gravity field, which is used to investigate the structure of inner Earth.

“It allows us to probe deep into the Earth’s interior. We can model the structure of the lithosphere using both gravity and seismic data.

“Understanding Earth’s interior is extremely important if we are to comprehend the state of our planet, including its resources and hazards.”

Dr Barletta added, “Normally we see uplift happening slowly over thousands of years, but in the Amundsen Sea Embayment we see it taking place over centuries or even decades.

“This tells us that the mantle below is very fluid and moves quickly when the weight of the ice has been removed.”

And the uplift is getting faster. According to the research, in 100 years, these uplift rates will be up to three and a half times faster than they are at the moment.

These results are compatible with what can be inferred from the GOCE gravity model.

This validation serves as reference for more accurate estimates of Earth's interior from GOCE, especially where there is no GPS coverage.

After spending over four years in orbit mapping tiny variations in Earth’s gravity field, ESA’s GOCE mission came to a natural end in 2013 when it ran out of fuel. As this recent research shows, its data continue to be used to advance our knowledge of processes happening deep inside our planet. As well as being used for solid-Earth physics, it is also used for oceanography, geodesy and sea-level research, and contributes to understanding climate change.