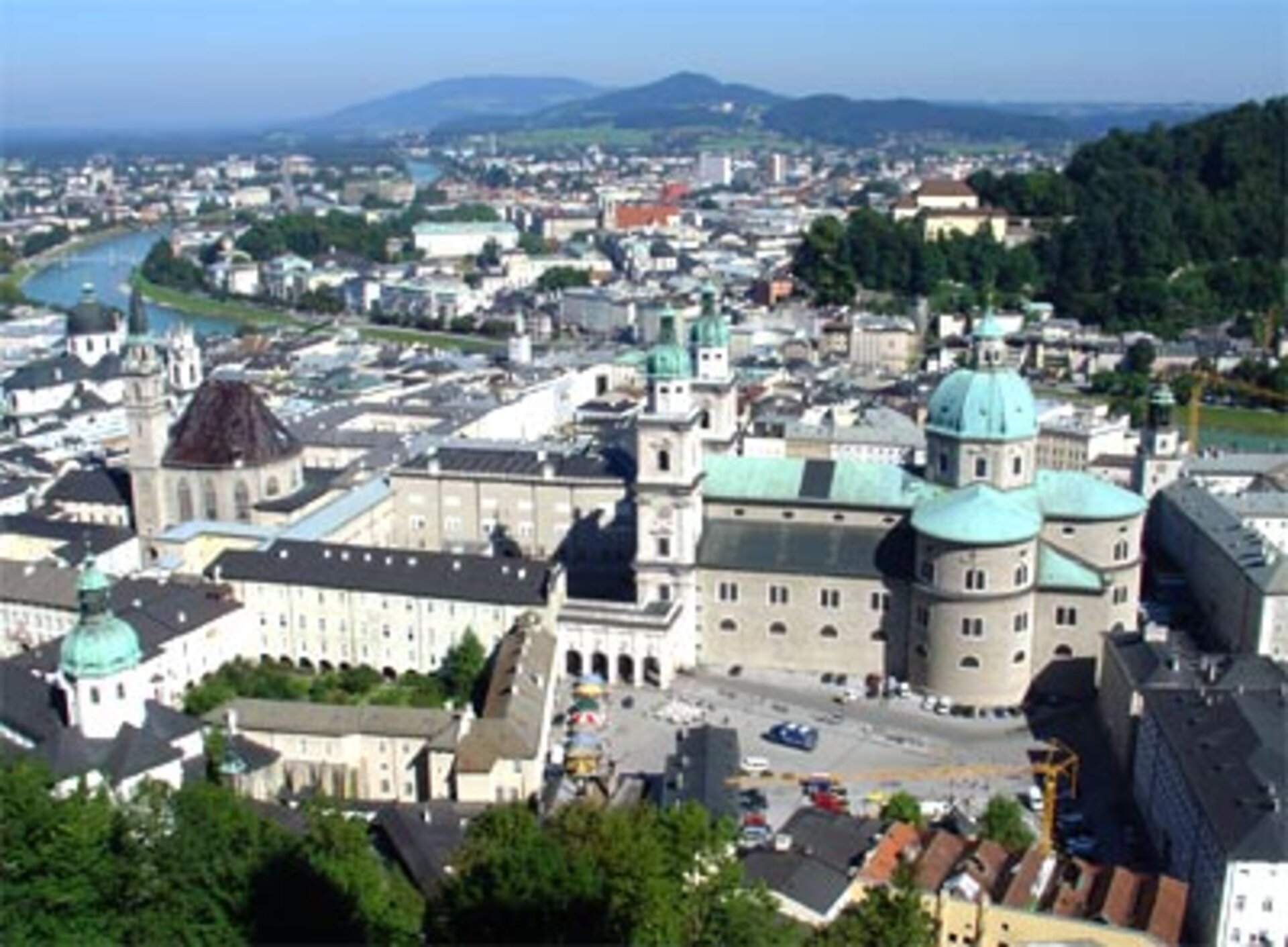 A short stroll from Mozart’s birthplace, scientists from across the world have gathered to discuss what the composer might have considered ‘music of the spheres’ – the constant symphony of environmental information returned from orbit by Envisat.

The ten instruments aboard ESA’s 8.2-tonne Earth Observation satellite generate a steady 140 Gigabytes worth of processed data per day, in the form of 77 separate data products concerning the state of our world’s land, oceans, ice and atmosphere.

This week’s Envisat Symposium in Salzburg, Austria, is a chance for users of those products – scientific researchers and value-adding service providers alike – to meet, compare results and present their findings so far. Around 865 participants are attending from 53 different countries, presenting more than 650 papers and posters in up to six parallel sessions.

The Symposium was formally opened on Monday by a panel headed by Eduard Mainoni, Austria’s Secretary of State for Transport, Innovation and Technology: “I am very pleased to welcome you to here, especially as the government of Austria has strong support for Earth Observation as one of the widest fields of applications and operational uses of space technology, and is proud of our scientific and industrial contributions to Envisat.”

Also present at the Symposium opening was ESA Director General Jean-Jacques Dordain – the first time a Director General has attended such an event. He recalled being present at Envisat’s launch in French Guiana in March 2002, then serving as ESA Director of Launchers: “I am proud of Envisat – and this event is a great opportunity for all of us to learn about the large amounts of data and products coming from the satellite and its ERS predecessors.

“The large numbers attending this Symposium are evidence of four separate points: the wide variety of capabilities of Envisat; the growing significance of space systems for environmental monitoring; the importance of international co-operation and, of course, the attractiveness of Salzburg!”

ESA Director of Earth Observation Programmes José Achache also addressed the meeting: “I am proud and happy to open this Symposium, since I have had science as my priority during my time at the Agency. I well remember the launch of Envisat, shortly after I first became Director.

“The launch was perfect, placing the satellite to within a few metres of its planned orbit, which means we still have 75% of its fuel left, opening up the prospect of a mission lifetime of another seven years.”

Achache added that the satellite has been working almost perfectly since the start, with its ground segment data distribution capabilities increasing steadily in line with growing user expectations, with online near-real time distribution made possible thanks to the intensive use of the Artemis communication satellite – more than 50% of Envisat data are now transmitted via Artemis.

For the future, Envisat will remain a crucial part of the joint ESA-European Commission Global Monitoring for Environment and Security (GMES) initiative to develop an independent planetary monitoring capability, which continues to make rapid progress, with GMES has been confirmed as Europe’s segment of the international Global Earth Observation System of System (GEOSS).

Envisat data are a crucial part of the suite of operational services making up the current GMES Services Element. The spacecraft will also have a longer legacy within GMES, as the spacecraft’s individual instruments are inspiring the design of the new generation of operational satellites at the centre of the space segment of GMES – known as the Sentinels.

With tried-and-tested sensors required to ensure operational readiness, the first Sentinel is planned a carry Synthetic Aperture Radar, the second a multispectral imager along the lines of Medium Resolution Imaging Spectrometer (MERIS), the third will carry an altimeter and Advanced Along Track Scanning Radiometer (AATSR)-type instrument, and the fourth Sentinel will have sensors for atmospheric chemistry.

Along with the scientifically-oriented Earth Explorers – five have been selected so far – smaller satellites will eventually succeed Envisat.

Achache concluded by stressing his view that even as individual missions multiply, easily available data and inter-operable data standards will be required to allow Earth Observation applications to grow to their full potential: “We will need open and operable systems – a principle I have called Oxygen”. He quoted the rapid user expansion arising from full and free access to GPS and internet technology as past parallels.

Following the Symposium’s opening, a quintet of researchers gave an overview of Envisat results to date. Helmut Rott of the University of Innsbrück in Austria began with land applications, including AATSR detection of soil moisture changes across south west Germany, combined radar and MERIS identification of deforestation and pollution-induced vegetation damage in Siberian Russia.

Radar and optical Envisat data have also been applied to Austria to create snow maps across mountainous regions to predict hydrological run-off with a high level of accuracy. And the same combination of instruments – along with hot-spot-detecting AATSR - has been trained on forest fires in Borneo and California.

Jean-Louis Fellous of the French Institute for Exploitation of the Sea (known by its French initials as IFREMER) explained how Envisat data have improved our knowledge of the ever-shifting face of our oceans. Envisat’s Radar Altimeter-2 (RA-2), used in association with other space-based altimeters has provided high-resolution maps of ocean currents and eddies, and provided solid evidence of a steady sea level rise averaging 0.3 millimetres a year.

Simultaneously AATSR has been steadily taking the temperature of the global sea surface, to a maximum accuracy of 0.1ºK while MERIS has mapped ocean colour, measuring chlorophyll content that enable scientists to deduce phytoplankton numbers, a vital variable in modelling the extent of climate change.

Envisat was praised as a worthy “toolbox” for polar research by Duncan Wingham of University College London.

He recounted how results gathered by the satellites and its ERS predecessors have already greatly reduced the mass balance uncertainty associated with the Antarctic ice sheets – basically whether they are growing or shrinking across the continent – and promise to do more so in future, especially in conjunction with ESA’s forthcoming CryoSat, a mission to measure global ice thickness.

Wingham also stressed the increasing utility of radar data in operational sea ice forecasting, and that the data returned on sea ice by Envisat’s new (GMM) Global Monitoring Mode are starting to fill holes in our existing models.

Hartmut Grassl of the Max Planck Institute for Meteorology covered atmospheric applications as part of a wide-ranging appraisal of Envisat as an environmental satellite, stressing the operational data assimilation taking place of its results by bodies such as the European Centre for Medium Wave Forecasts (ECMWF).

Fabio Rocca of the Polytechnic of Milano concluded the day by outlining the many and varied uses of Envisat SAR interferometry (InSAR) – basically a highly-sophisticated version of ‘spot the difference’ carried out with multiple radar images of the same site.

“Interferometry can take place on the short term – in seconds to minutes – or the long term – days to months,” Rocca explained. “The change in perspective between images can be used to generate highly sophisticated digital elevation models (DEMs), or the change in signal coherence can give information on vegetation or surface properties. In the longer term, interferometry can also show seismic movement and building subsidence.”

“What Envisat does is allow us to create interferograms on a much wider scale than before – up to 400 km across – and these products can also give us information on atmospheric variations such as columnar water content above a given region.”

Rocca went on to recount difference uses of InSAR, including measurements of ground subsidence in Pisa, ground deformation around the Mount Etna volcano, and landslides on one road into Salzburg.

The opening session concluded, the real work of the Symposium begins on Tuesday, as researchers reveal what uses they are making of the results revealed by Envisat – return here tomorrow for another report.