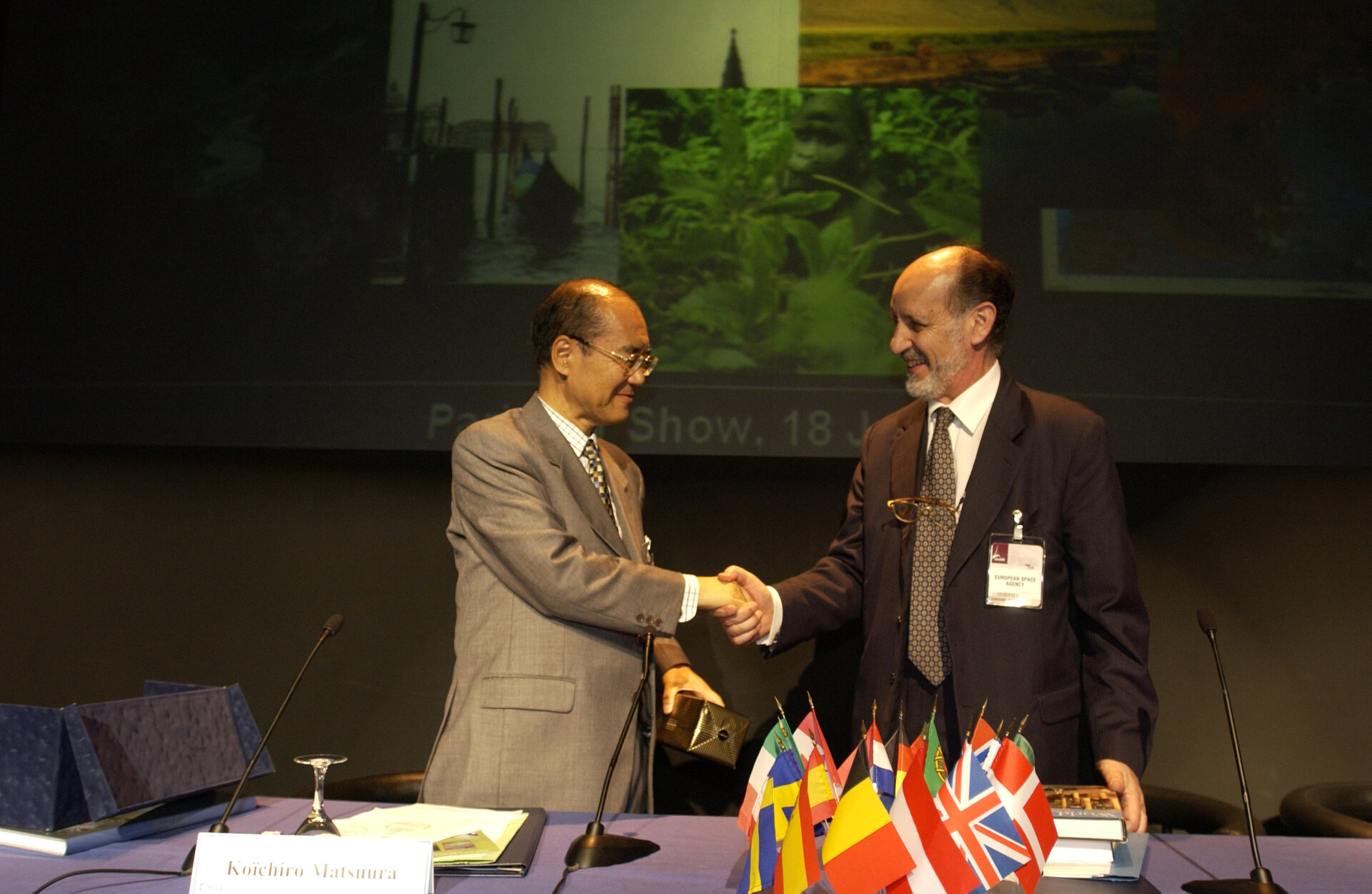 Earth Observation satellites will help safeguard hundreds of natural and cultural World Heritage sites, under the terms of an agreement signed by ESA and UNESCO at the Paris Air Show at Le Bourget.

ESA and UNESCO are already co-operating in a joint project called BEGo (Build Environment for Gorilla) to use satellite data to map remote mountain parks in Uganda, Rwanda and the Democratic Republic of Congo. These parks are either World Heritage sites or candidate sites, making up the last refuge of the less than 600 mountain gorillas still alive. But human encroachment on the parks in search of fuel, farmland and hunting threatens the gorillas' survival.

From the Great Barrier Reef to Stonehenge, there are 730 different sites on UNESCO’s World Heritage list – 563 of them cultural, 144 natural and 23 both. UNESCO considers 33 of them currently under threat. The idea of the Open Initiative is that data from space will be used to monitor these sites, alerting authorities to land use changes that could place the sites in danger. Following ESA’s agreement with UNESCO NASA is near to following suit and there have also been requests to join the Open Initiative from the Indian, Japanese, Canadian and Brazilian space agencies.

Observing the Earth: to understand, secure, and benefit

The morning before the signing took place, the ESA stand at Le Bourget hosted a special session on 'Observing the Earth – Why is it important?'. Split into three sections, the session highlighted how satellite images could be used to understand and secure our planet, as well as benefit the lives of our people.

David Llewellyn-Jones, of the Space Research Centre at the University of Leicester, and Herbert Fischer of University Karlsruhe in Germany spoke on the first theme. "Satellites contribute to research into global climate change by observing globally, with continuity," explained Llewellyn-Jones. "Only satellites can provide the coverage, continuity, and consistency that climate change research requires."

On the theme of how satellite imagery can help secure our planet, Steffan Kuntz of remote sensing company Infoterra outlined ESA's Global Monitoring for Environment and Security (GMES) joint initiative with the European Commission.

And Mark Jones, Editor of Reuters AlertNet – which is a global communications network, intended to swiftly inform the humanitarian community about emergency situations – presented an analysis of what non-governmental organisations in the field want most out of Earth Observation.

"Under the right circumstances, Earth Observation can help in all key areas," said Jones. "This goes from preparedness – providing early warning of disasters – to assessing their extent, planning response operations and monitoring the scene of the disaster to see we leave the scene as we found it."

Jones quoted one experience of the International Federation of the Red Cross. Responding to an earthquake in Turkey in 1999, they found the affected area stretched far beyond their expectations, stretching 110 km across. A satellite image would have identified the true scale of the disaster far sooner.

Rocca spoke about how measurements of ground movement from hundreds of kilometres away in space can actually be extraordinarily precise – and these results can be used to accurately assess geophysical risk. "This is an application unmatchable with ground based instruments," said Rocca.

By combining different radar images taken by ESA's ERS or Envisat spacecraft together – a technique called interferometry – ground movement on the scale of a millimetre can be detected. Applications include identifying subsidence caused by urban tunnelling or water, gas or oil extraction and detecting minute tectonic changes in an area that may foretell more serious earthquakes to come.

The session was concluded by José Romero of the Swiss Agency for the Environment, Forests and Landscape. He discussed how satellites provide 'environmental intelligence' for the various multinational environmental agreements set up to combat the various threats that our global environment faces.

Romero added: "The advantages of Earth Observation are that it has global coverage, is scalable from big to small areas with time periodicity, and above all it is cost effective."