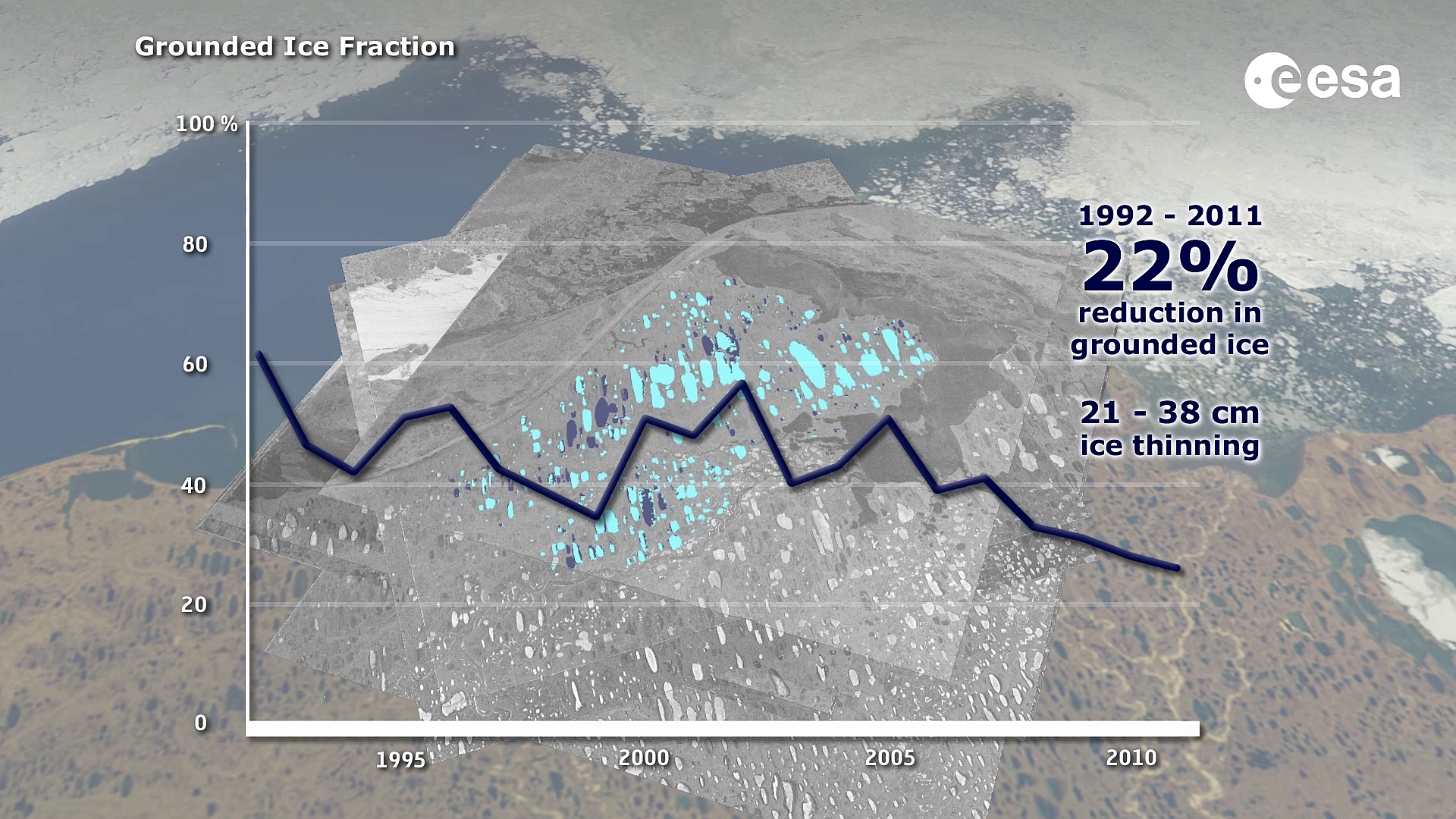 Ice in northern Alaska’s lakes during winter months is on the decline. Twenty years of satellite radar imagery show how changes in our climate are affecting high-latitude environments.

Changes in air temperature and winter precipitation over the last five decades have affected the timing, duration and thickness of the ice cover on lakes in the Arctic.

In this region, warmer climate conditions result in thinner ice cover on shallow lakes and, consequently, a smaller fraction of lakes freezing all the way through during winter months.

These changes in ice cover affect the local and regional climate, the dynamics of the underlying permafrost and the availability of water for residential and industrial use throughout the winter. They also alter the physical, thermal and chemical properties of the water, affecting the ecology dependent on them.

But the magnitude of these changes had not yet been comprehensively documented until now.

In a recent study of Alaska’s North Slope, published in The Cryosphere, the ice regimes of shallow lakes were documented using radar images from ESA’s ERS-1 and -2 satellites.

“Prior to starting our analysis, we were expecting to find a decline in ice thickness and grounded ice based on our examination of temperature and precipitation records of the past five decades from the Barrow meteorological station,” said Cristina Surdu, lead author of the study.

“At the end of the analysis, when looking at trend analysis results, we were stunned to observe such a dramatic ice decline during a period of only 20 years.”

The greatest change was observed during late winter (April–May) over the 20-year period, which gradually decreased from 1991 to 2005. The ice experienced a more abrupt decline during the final six years of the analysis, reaching its lowest in 2011.

Radars such as those on the ERS mission can ‘see’ through clouds and in the dark, providing continuous imagery over areas like northern Alaska that are prone to bad weather and long periods of darkness.

How the radar signals bounce back can also be used to determine if the lake ice was grounded or ‘floating’ (with water underneath).

While radar imagery from these two satellites, as well as from the Envisat mission – which ended in 2012 – allowed adequate monitoring of freezing lakes, continued coverage would improve the investigation of ice regimes at high latitudes.

The upcoming Sentinel-1 mission of the Copernicus programme will provide more frequent coverage of this area while ensuring global continuity of radar acquisitions for operational lake-ice monitoring.

The first of this two-satellite mission is set for launch this spring.