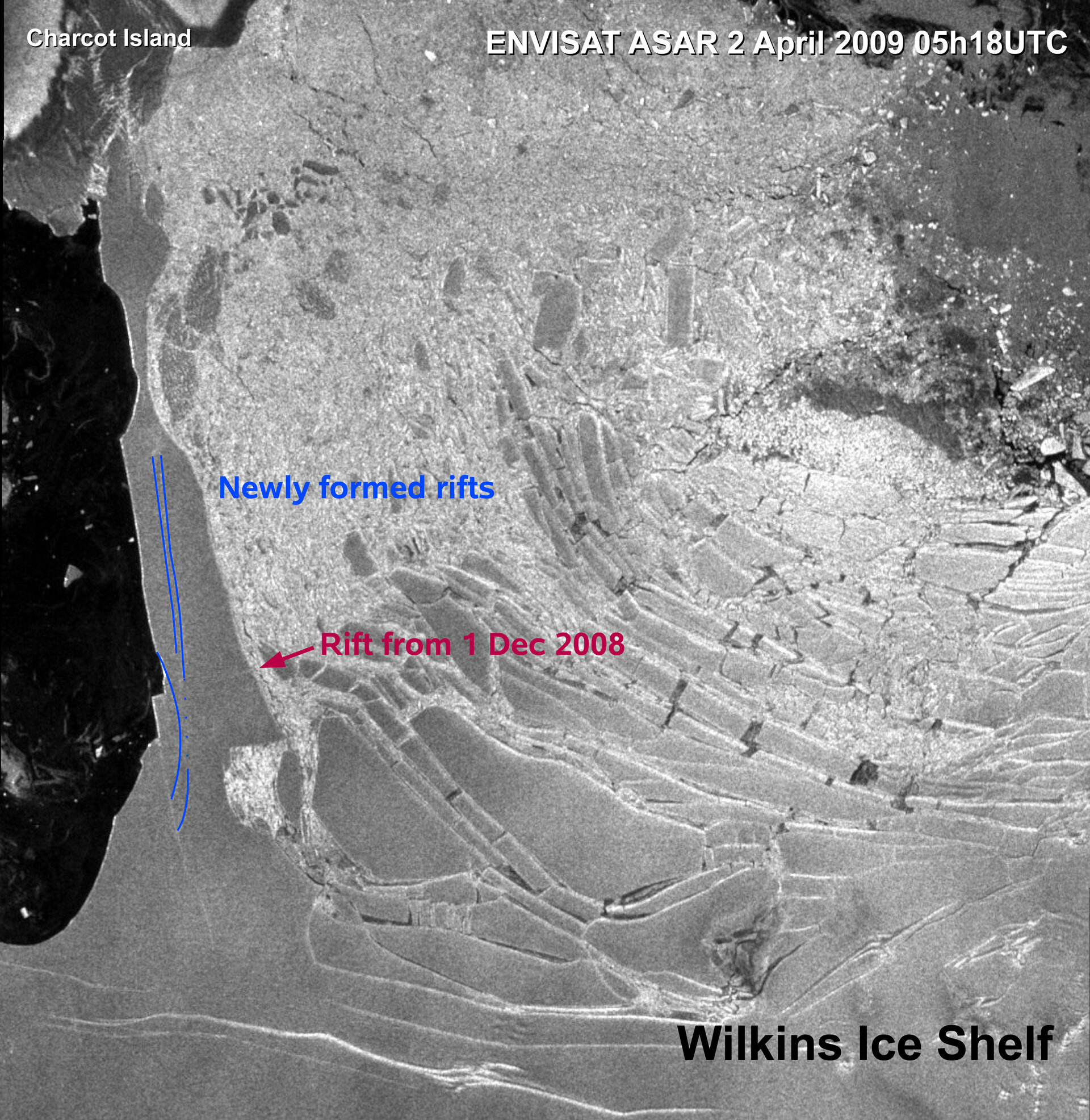 The Wilkins Ice Shelf is at risk of partly breaking away from the Antarctic Peninsula as the ice bridge that connects it to Charcot and Latady Islands looks set to collapse. The beginning of what appears to be the demise of the ice bridge began this week when new rifts forming along its centre axis resulted in a large block of ice breaking away.

The Advanced Synthetic Aperture Radar (ASAR) images acquired on 2 April by ESA’s Envisat satellite confirm that the rifts are quickly expanding along the ice bridge.

Dr Angelika Humbert from the Institute of Geophysics, Münster University, and Dr Matthias Braun from the Center for Remote Sensing, University of Bonn, witnessed the recent development during their daily monitoring activities of the ice sheet using data from Envisat and the German Aerospace Center’s TerraSAR-X satellite.

By having a time series of radar satellite images throughout this event, Humbert and Braun are able to determine how the rifts develop and how the narrowest part of the bridge responds to these changes. Knowing these details allows them to learn more about the behaviour of ice under stress.

Satellite acquisitions of the ice shelf are available to the public via ESA’s ‘Webcam from Space’. The web page will be updated with Envisat images as they are received to allow the public to witness the event.

By acquiring daily images of Antarctica that are easily accessible to scientists, ASAR has provided an unprecedented time series of the recent break-up events and allowed scientists to continuously monitor these developments to better understand the break-up process of ice shelves.

Many changes occurred to the ice shelf in 2008, as witnessed by Envisat. In late February, 425 sq km of ice calved away, narrowing the ice bridge down to a 6-km strip. At the end of May a 160-sq-km chunk of ice broke away and reduced the ice bridge to just 2.7 km, leaving it only 900 m wide at its narrowest location.

"In the past months, we have observed the ice bridge deforming and its narrowest location acting as a kind of hinge," Humbert said.

"During the last year the ice shelf has lost about 1800 sq km or about 14% of its size. The break-up events in February and May 2008 happened in just hours, leaving the remaining part of the ice bridge in a fragile situation," Humbert explained. "Rift developments during October and November resulted presumably from the loss of 1220 sq km along the northern ice front during June and July 2008."

Antarctic’s ice sheet was formed by thousands of years of accumulated and compacted snow. Along the coast the ice gradually floats on the sea, forming massive ledges known as ice shelves. Several of these ice shelves, including seven in the past 20 years, have retreated and disintegrated.

The Wilkins Ice Shelf had been stable for most of the last century before it began retreating in the 1990s. Scientists are currently investigating the reasons and processes of the recent ice shelf break-ups and whether the current situation is linked to the extraordinary warming during the past 50 years, in which the Antarctic Peninsula has warmed by 2.5°C – far more than the global average.

Polar areas are very remote and the conditions often found there, such as restricted daylight and thick cloud cover, make it very difficult to carry out in situ research. The advent of satellites has allowed scientists to continuously monitor these regions.

ASAR is particularly suited for polar monitoring because it can operate at night and penetrate through clouds. Long-term satellite monitoring over Antarctica is important because it provides authoritative evidence of trends and allows scientists to make predictions.

Following the conclusion of the International Polar Year in March, ESA is compiling complete datasets over polar areas and making them available to polar scientists at no cost.