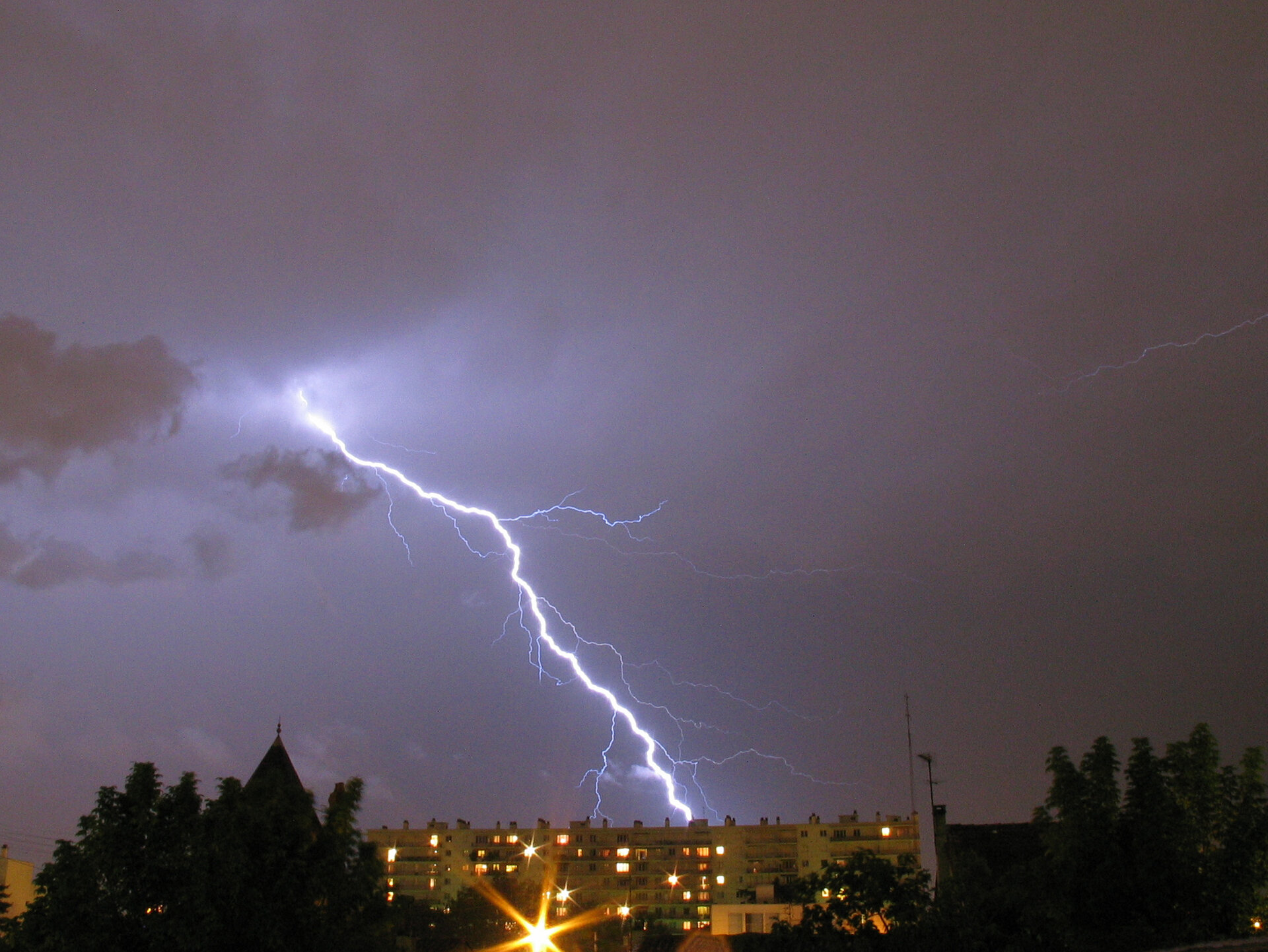 The batch of new results from ESA’s Swarm mission has not only included the highest-resolution map of the magnetic field generated by Earth’s crust and a map of the tiny magnetic signals from the oceans, but also, remarkably, some unexpected insight into lightning in the upper atmosphere and geomagnetic storms.

These latest findings are wowing this year’s European Geosciences Union meeting in Vienna, Austria. This week-long event draws scientists from all over the world to share discoveries about our planet.

One of these findings relates to the coupling between the weather we experience on the ground and its counterpart in space.

Discharging massive bursts of electricity, lightning is one of nature’s most dangerous yet beautiful displays. By the laws of physics, the flashes we witness from the ground must also propagate upwards. However, much is yet to be learnt about the other end of a lightning bolt.

Although not designed to do so, it turns out that Swarm can measure this ionospheric counterpart. 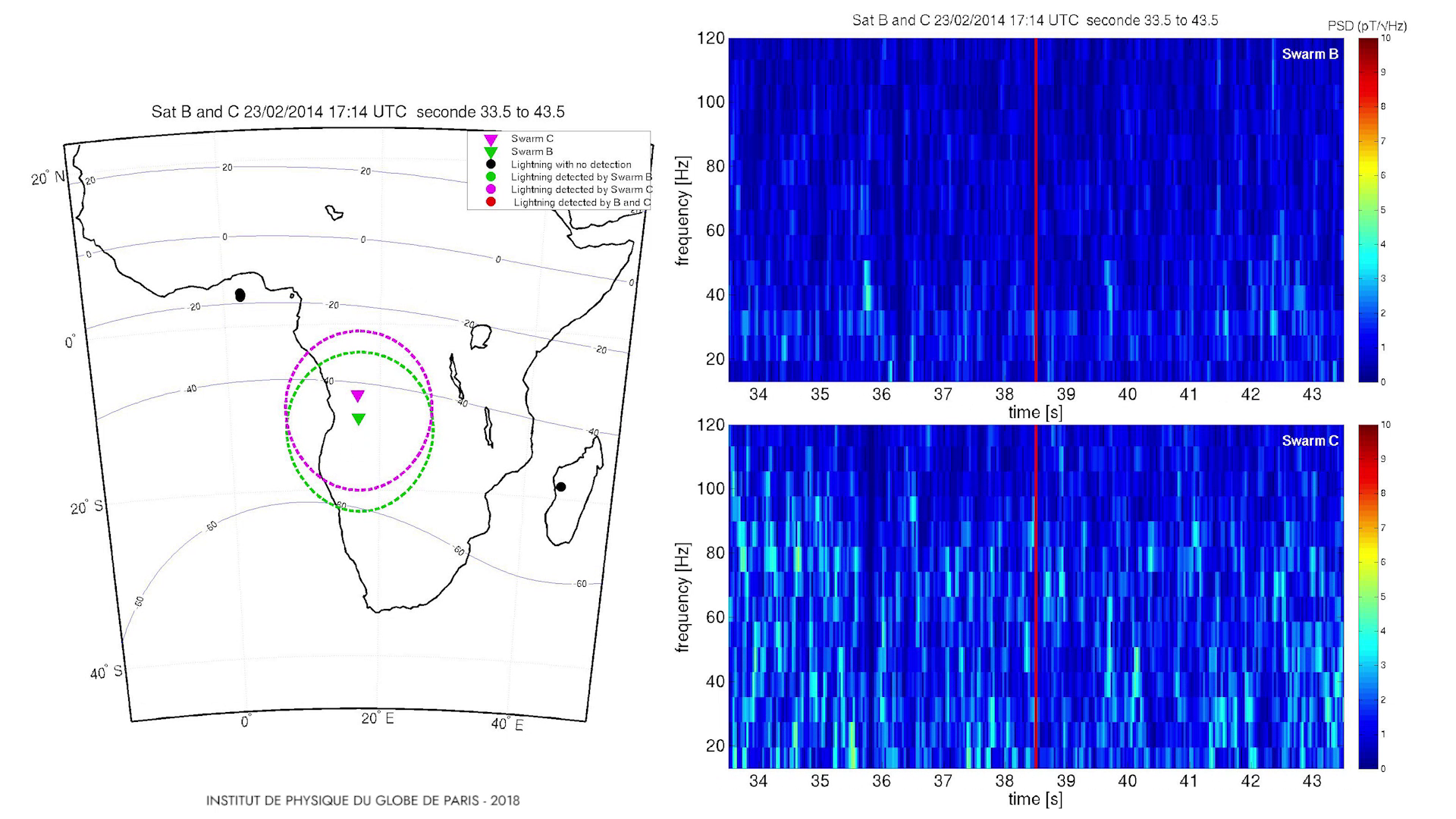 We are all used to seeing bursts of light unleased by lightning, but they also carry very low-frequency electromagnetic waves.

Early on in the mission, each of the three Swarm satellites’ magnetometers was run temporarily in a higher frequency mode than normal. Data from this time have been reanalysed and revealed that, surprisingly, the instruments detected these waves. Converted into sound, they are known as whistlers.

The whoosh of these lightning whistlers can be heard in the animation above.

Gauthier Hulot from the Institut de Physique du Globe de Paris said, “Although few whistlers at such unusual frequencies have been measured from space before, Swarm detected some 4000 in just four days, which is a particularly rich dataset.

“This gives us a unique opportunity to investigate the nature of the ionosphere and also see how lightning signals escape the atmosphere and propagate into space.”

In addition, Swarm is now contributing to our understanding of how storms in the upper atmosphere develop. 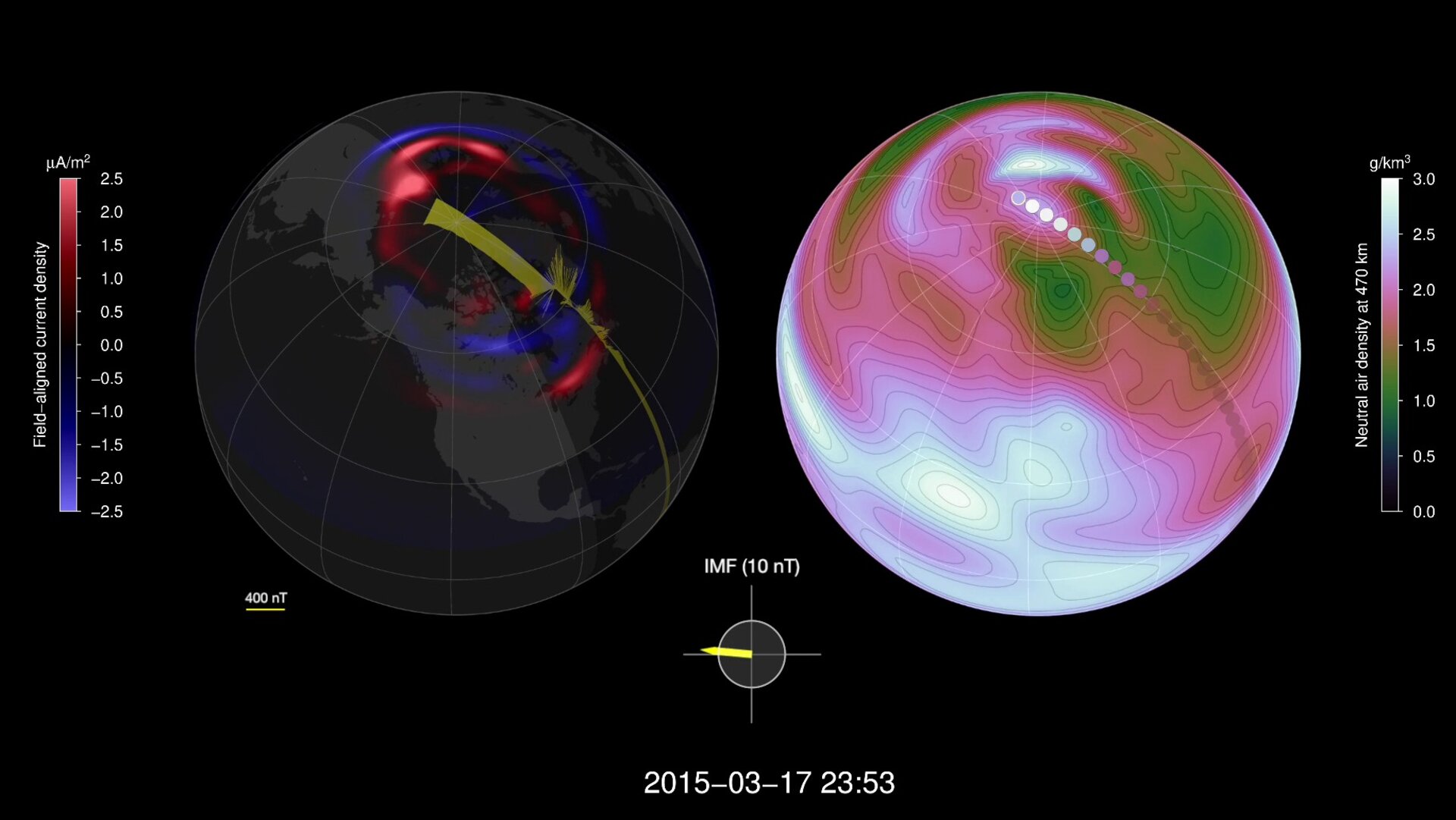 During a geomagnetic storm, solar wind interacts with Earth’s magnetic field, transferring large amounts of energy into the upper atmosphere in the form of electric currents.

While some of this energy can fuel auroras, most is transferred into heat in a process called Joule heating, which causes the upper atmosphere to expand.

Eelco Doornbos from Delft University of Technology explained, “Swarm has given us a novel view of how this heat is dispersed in the upper atmosphere.

“The animation shows that when the storm begins, heat enters the auroral zone. In response, the atmospheric gas above the aurora expands and is lifted to higher altitudes. It then falls in waves that cover the entire globe in a matter of hours. This is a truly massive movement of gas in the upper atmosphere.”

Rune Floberghagen, ESA’s Swarm mission manager, noted, “The mission was built to give us new insight into the magnetic field, which it is doing spectacularly.

“And, while it continues to deliver on its promise, we see a steady stream of ground-breaking scientific results that ultimately help us understand the world we live in and the space around it.

“The remarkable results that just keep coming from Swarm never cease to amaze me.”