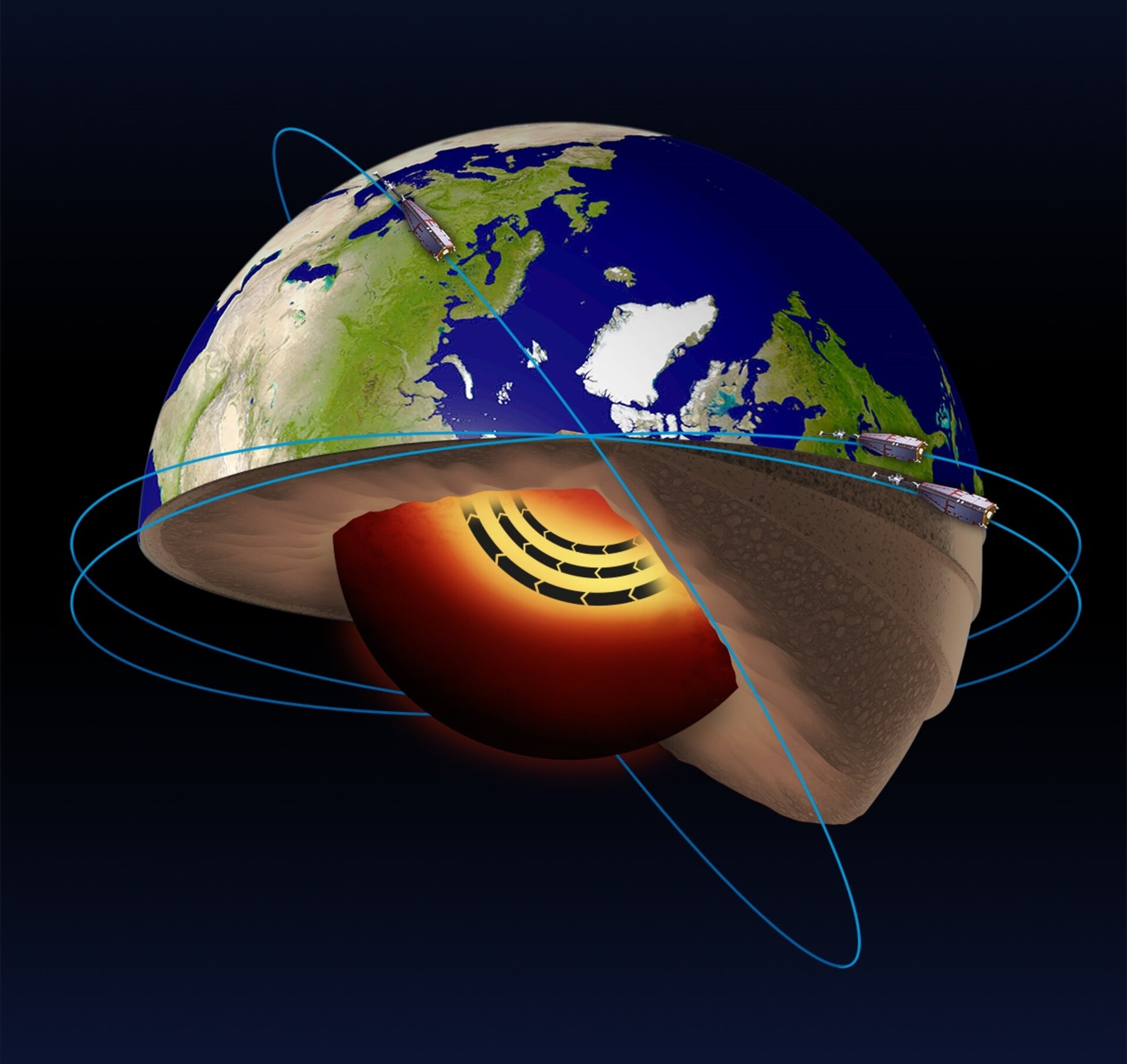 We would normally associate jet streams with the weather but, thanks to ESA’s magnetic field mission, scientists have discovered a jet stream deep below Earth’s surface – and it’s speeding up.

Launched in 2013, the trio of Swarm satellites are measuring and untangling the different magnetic fields that stem from Earth’s core, mantle, crust, oceans, ionosphere and magnetosphere.

Together, these signals form the magnetic field that protects us from cosmic radiation and charged particles that stream towards Earth in solar winds.

Measuring the magnetic field is one of the few ways we can look deep inside our planet. As Chris Finlay from the Technical University of Denmark noted, “We know more about the Sun than Earth’s core because the Sun is not hidden from us by 3000 km of rock.”

The field exists because of an ocean of superheated, swirling liquid iron that makes up the outer core. Like a spinning conductor in a bicycle dynamo, this moving iron creates electrical currents, which in turn generate our continuously changing magnetic field.

Tracking changes in the magnetic field can, therefore, tell researchers how the iron in the core moves.

The accurate measurements by the unique constellation of Swarm satellites allow the different sources of magnetism to be separated, making the contribution from the core much clearer.

A paper published today in Nature Geoscience describes how Swarm’s measurements have led to the discovery of a jet stream in the core.

Phil Livermore from the University of Leeds in the UK and lead author of the paper said, “Thanks to the mission we have gained new insights into the dynamics of Earth’s core and it’s the first time this jet stream has been seen, and not only that – we also understand why it’s there.”

One feature is a pattern of ‘flux patches’ in the northern hemisphere, mostly under Alaska and Siberia.

“These high-latitude flux patches are like bright spots in the magnetic field and they make it easy to see changes in the field,” explained Dr Livermore.

Swarm reveals that these changes are actually a jet stream moving at more than 40 km a year – three times faster than typical outer-core speeds and hundreds of thousands of times faster than Earth’s tectonic plates move.

“We can explain it as acceleration in a band of core fluid circling the pole, like the jet stream in the atmosphere,” said Dr Livermore.

So, what is causing the jet stream and why is it speeding up so quickly?

The jet flows along a boundary between two different regions in the core. When material in the liquid core moves towards this boundary from both sides, the converging liquid is squeezed out sideways, forming the jet. 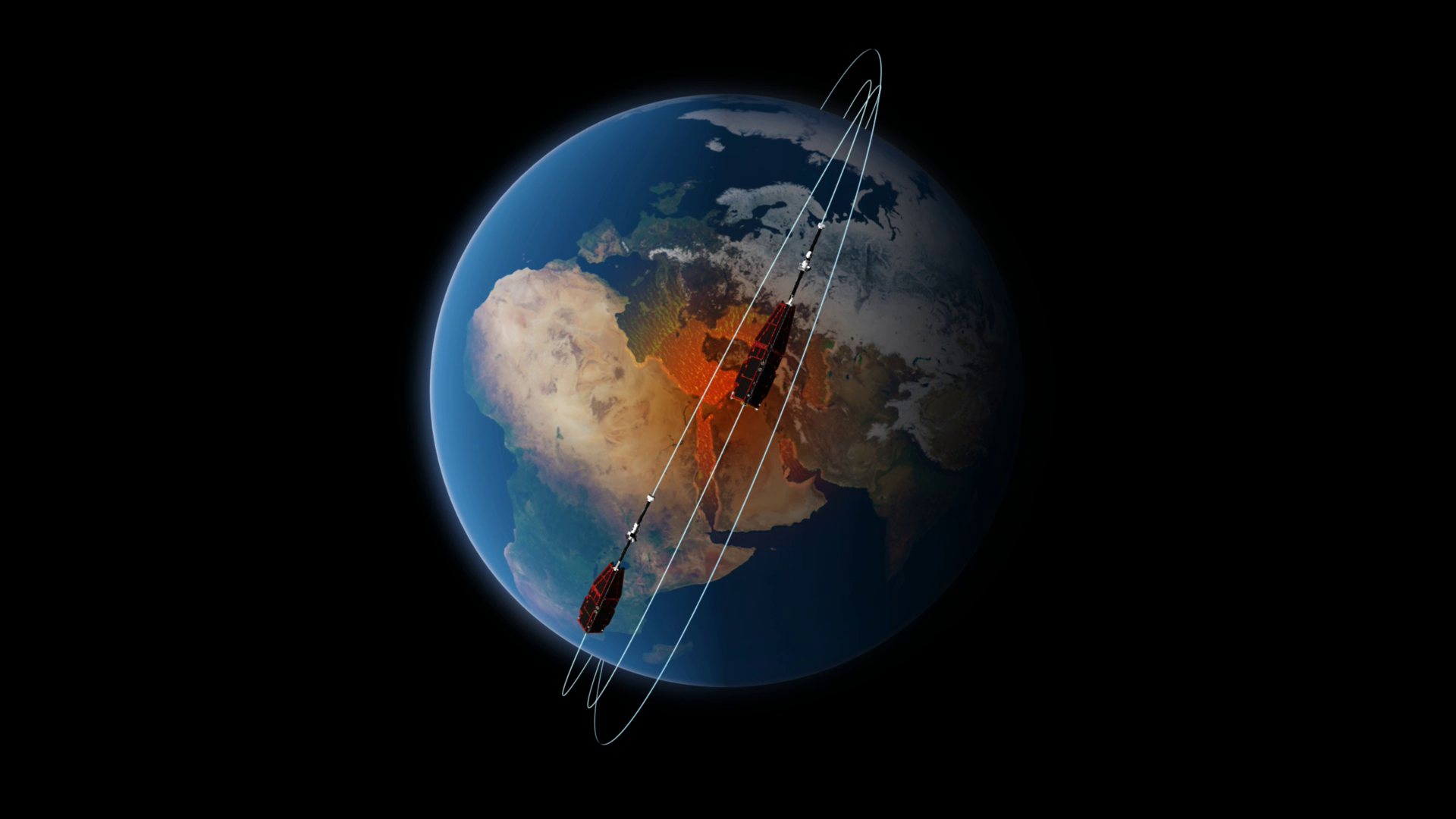 “Of course, you need a force to move the fluid towards the boundary,” says Prof. Rainer Hollerbach, also from the University of Leeds.

“This could be provided by buoyancy, or perhaps more likely from changes in the magnetic field within the core.”

As for what happens next, the Swarm team is watching and waiting.

“This feature is one of the first deep-Earth discoveries made possible by Swarm. With the unprecedented resolution now possible, it’s a very exciting time – we simply don’t know what we’ll discover next about our planet.”