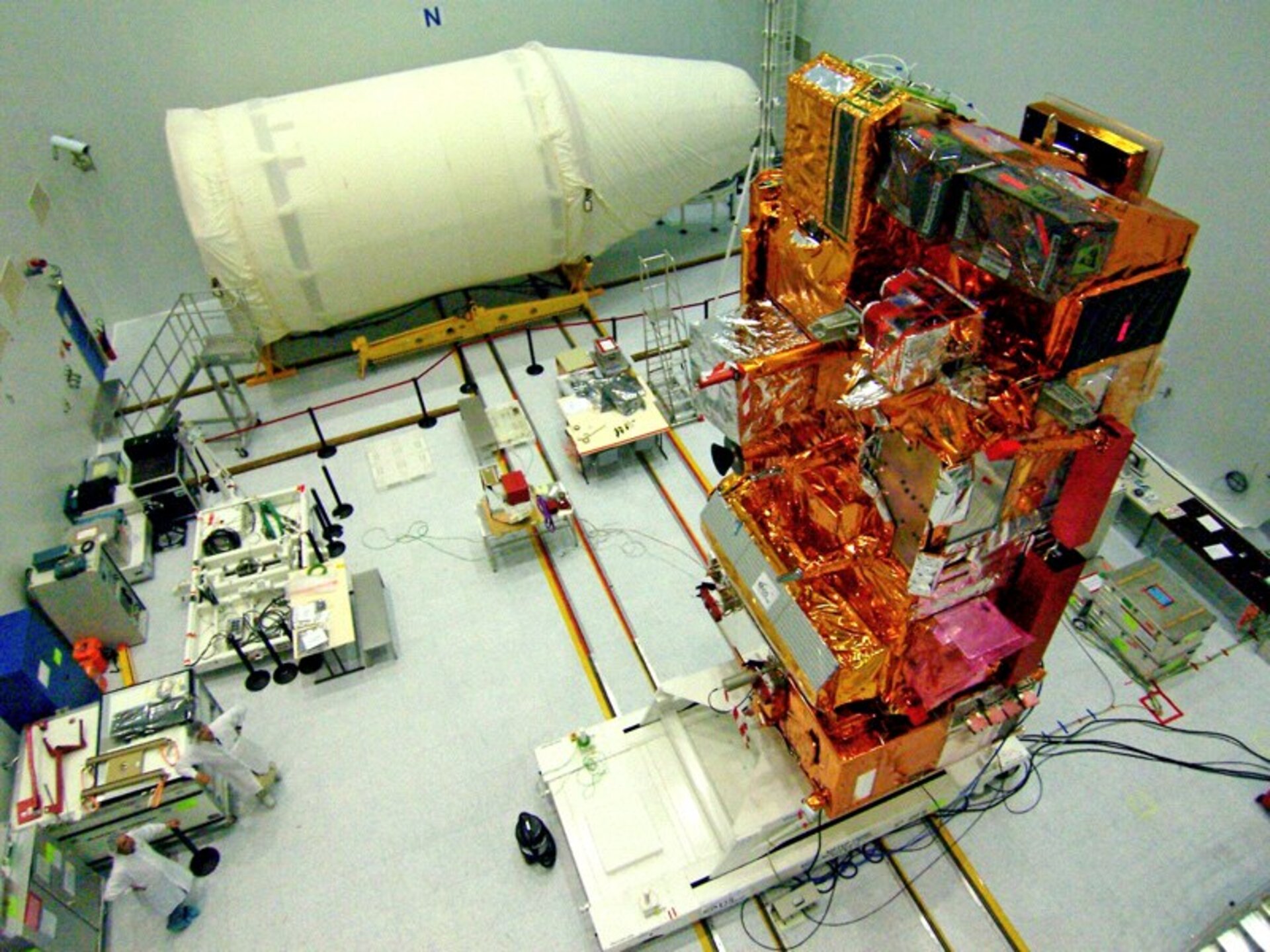 Since the arrival of MetOp-A at the Baikonur Cosmodrome in Kazakhstan, preparations for the launch of Europe's first polar-orbiting weather satellite have been progressing well. With a little less than a month to go before MetOp lifts-off, the team of engineers and scientists look forward to the last phase of launch campaign activities.

MetOp is due for launch on 17 July 2006 at 18.29 (CEST) on a on a Soyuz/ST Fregat, operated by Starsem. The Soyuz rocket was first used in 1963 and has since launched more than 1700 times. A success rate of more than 97% makes it one of the most reliable launch vehicles in the world. The same launch pad will be used for MetOp as was used to put Yuri Gagarin, the first man into space, in 1961.

Before the MetOp satellite is installed on the launcher and rolled out to the launch pad, the final satellite integration and testing is being performed as part of the three-month long launch campaign. The MetOp satellite arrived at the Baikonur Cosmodrome mid-April and since then several milestones have been achieved.

As part of the satellite re-assembly activities, two weeks were dedicated to the integration of the solar array. This is a lengthy process and the installation required extremely careful work to make sure that all the electrical and mechanical connections were correct. The completion of the solar array installation was marked by a final mini-deployment test, which demonstrated that the motors driving the mechanism that unfolds the array worked properly. The completion of this important activity was confirmed by a formal key-point inspection.

In addition to the planned activities to re-assemble the satellite and subsequently verify the status of its functional health, it was necessary to swap the two AMSU (Advanced Microwave Sounding Units) instruments on-board. This was because some concerns about the quality of a few internal parts had been raised. The replacement instruments were urgently flown in from the U.S. After being exchanged, the instruments completed their testing programme and have been declared ready for flight. This has all been achieved without affecting the duration of the overall launch campaign.

An important exercise took place on 29 May - that being the first countdown rehearsal with ESA-ESOC and EUMETSAT in Darmstadt. The purpose of this procedure was to verify that all the communication links work correctly and that the countdown procedure is tested. There will be another rehearsal a few days before launch, which will include the launcher authorities.

On 17 June, following the last activities of completing the satellite external thermal and Electromagnetic Compatibility (EMC), the satellite was pronounced ready to proceed with fuelling in the Hazardous Processing Facility (HPF). The fuelling, due to last until end of June, will be the last satellite “standalone” activity before mating to the Russian hardware and starting the “combined activities” with the rocket, leading to launch.

MetOp-A will be Europe's first polar-orbiting satellite dedicated to operational meteorology. With its array of sophisticated instruments, this weather satellite promises to provide data of unprecedented accuracy and resolution on a host of different atmospheric variables such as temperature and humidity, wind speed and direction over the ocean, ozone and concentrations of other trace gases; thus making a huge contribution to global weather forecasting and climate monitoring capabilities. In addition, MetOp-A carries instruments to observe land and ocean surfaces as well as search and rescue instruments to aid ships and aircraft in distress.

MetOp is a series of three satellites that will be launched sequentially to ensure the delivery of high-quality global meteorological data until at least 2020. The series has been developed as part of a joint undertaking between the European Space Agency (ESA) and the European Organisation for the Exploitation of Meteorological Satellites (EUMETSAT), whereby MetOp forms the space segment of EUMETSAT's Polar System (EPS).