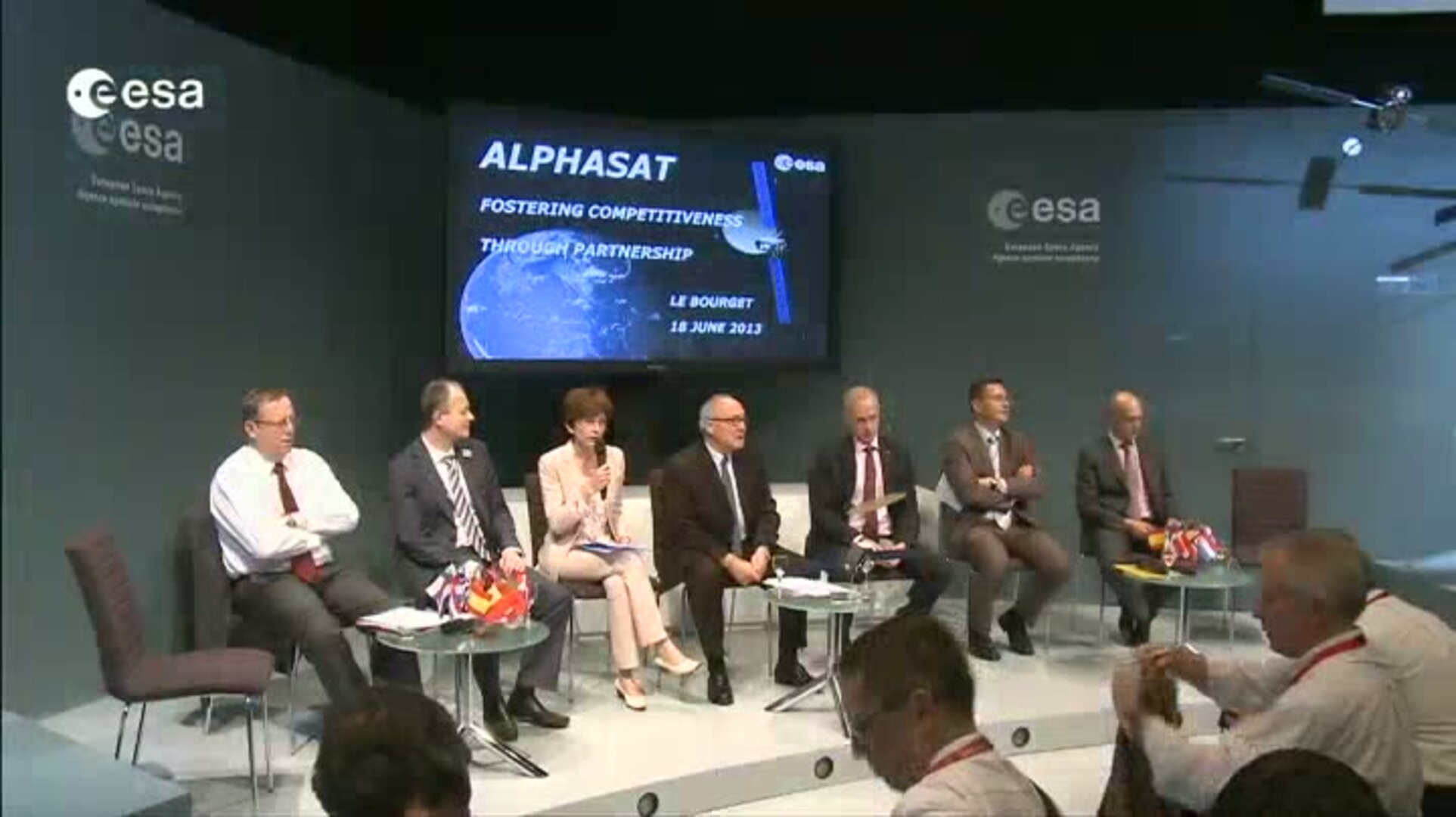 The representatives of Europe’s biggest public–private partnership in space met at Le Bourget today to discuss Alphasat, the result of their cooperation.

Visitors to the ESA Pavilion were greeted by a very special sight – a life-size model of the Alphasat satellite. Towering over the runway at an impressive 7 m tall and 3 m wide, it is difficult to miss and looks every inch the record-breaking achievement it is. The real deal has a solar array that spans 40 m when deployed, and a reflector boasting a diameter of 11 m.

Seven partners in the project, hailing from some of the most influential space organisations in the world, gathered at the ESA Pavilion to present Alphasat, the largest telecommunications satellite ever built in Europe. The mission involves public entities and private companies from all corners of the continent, and was developed by Astrium under a public–private partnership between ESA and UK telecommunications provider Inmarsat.

ESA Director of Telecommunications and Integrated Applications Magali Vaissière hosted the event and welcomed all to the Pavilion. ESA Director General Jean-Jacques Dordain addressed all attendants and emphasised the cooperative aspect of the project, commissioned by customer Inmarsat.

Inmarsat is a leading provider of voice, broadband data and IP communications based in London, UK. Not only does Alphasat expand their global network, but it also serves as a first flight opportunity for the high-power Alphabus platform developed jointly by ESA and France’s CNES space agency.

With the UK being the main contributor to the programme, the UK Space Agency also had a big part to play. In fact, all involved national space agencies, which include the German (DLR), French (CNES) and Italian (ASI) agencies, were keen to support the Alphasat/Alphabus mission as a way of boosting the technological standing of Europe in the global space sector.

Alphabus was developed by Astrium and Thales Alenia Space, and is Europe’s response to market demand for increased broadcasting services. It already gives European industry an unprecedented and unique position in the global telecom market, and is available on the commercial market.

Ruy Pinto, Inmarsat Chief Technology Officer, spoke about Alphasat and the increased safety applications and services it represents for aeronautical and maritime users.

David Parker, UKSA Chief Executive, followed on from Mr Pinto’s points. He spoke about telecommunications as a trigger for economic growth and the UK’s increased involvement in the industry.

As a public–private partnership (PPP), the mission also presented operators and industry with the chance to take on a project as ambitious as this with advanced technology.

PPPs are the most efficient way of stimulating new technological developments and providing flight heritage opportunities – essential ingredients for a competitive European market. ESA’s Advanced Research in Telecommunication Systems programme encourages just that. With ARTES support, its states’ market share has increased from 29% in 2000–05 to 35% in 2005–11.

French space agency CNES supported the development of the platform together with ESA. President of CNES, Jean Yves Le Gall, spoke about the advancement Alphabus presents for European industry.

Astrium CEO, Eric Béranger, and Sami Benamar, Vice President of Development at Thales Alenia Space, followed on from Mr Le Gall’s comments, and stressed the achievements and opportunities for industry presented by the payload and bus.

In addition to the advanced technology involved in the satellite and platform, there is another facet to the Alphasat/Alphabus project. Space is about cutting-edge technology and the scientific advancements and commercial applications it provides.

Hosted on Alphasat are four Technology Demonstration Payloads. Each represents a different element of space engineering that benefits hugely from in-orbit verification and testing. They also emphasise the truly European nature of the project, as they have their roots in countries all over Europe.

Among the experiments are a new type of laser communication terminal, a payload testing the viability of higher communication frequency bands, an instrument that monitors the effect of radiation on electrical components and a startracker equipped with a new detector.

Professor Jan Wörner, President of DLR, highlighted Germany's contribution to the project, both in the form of the platform and TDPs.

The roundtable took place on a special stage within the ESA Pavilion in front of an audience and assorted international members of the press. This follows increased interest in the Alphasat mission in the wake of a previous event in May at the satellite’s Toulouse home, Astrium. The satellite will soon arrive at the launch location, Kourou in French Guiana, and is preparing for launch based on the Alphabus platform on an Ariane 5 on 25 July.

You can view the video of the event above.