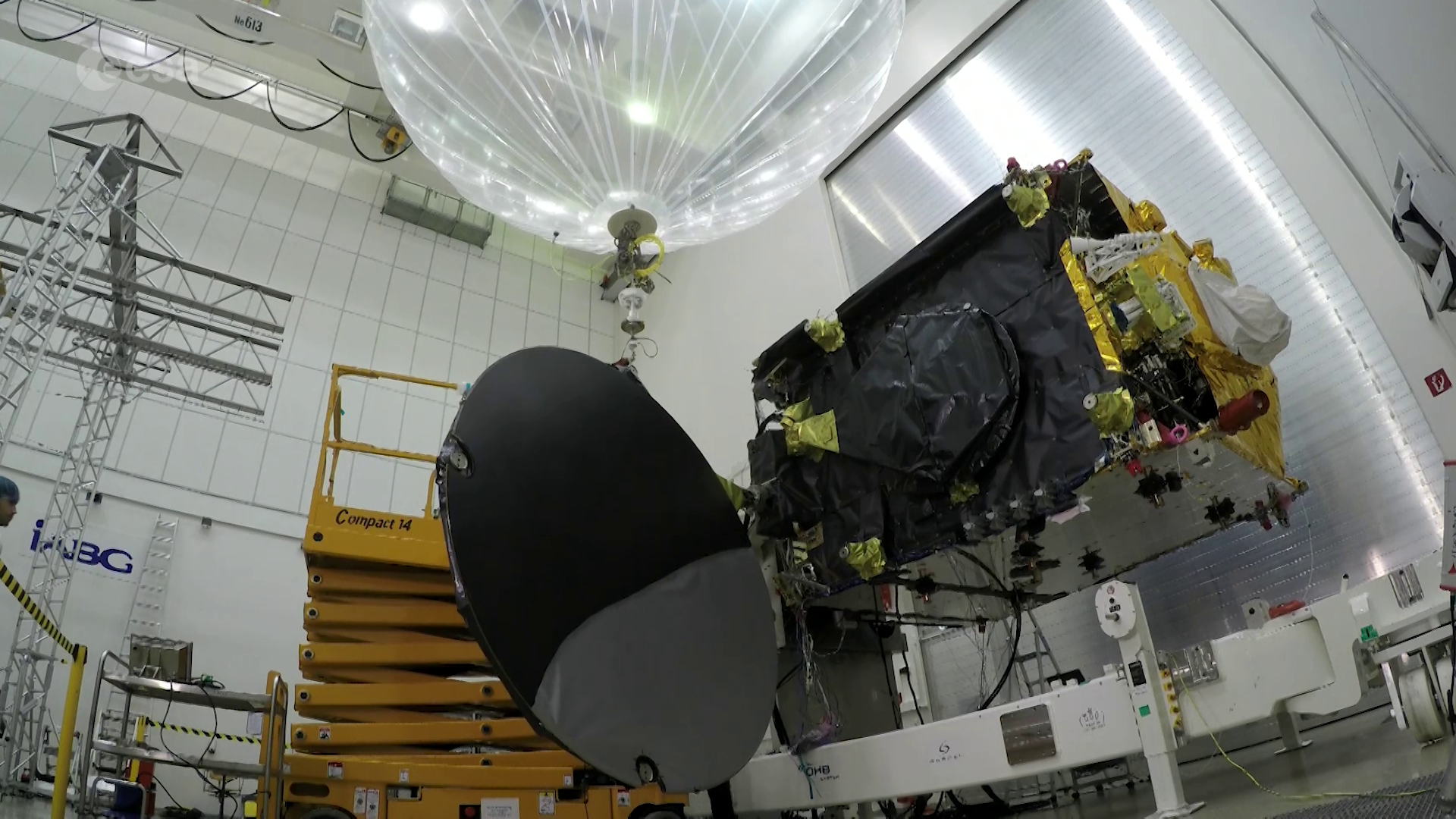 Having spent the past six months being poked, prodded and shaken, EDRS-C has ticked off another milestone towards being launched this summer.

As the world’s first dedicated commercial laser relay satellite, it has been undergoing extensive testing at the IABG facility in Germany to ensure it is ready for lift off and operations.

It is part of ESA’s ARTES programme’s efforts to federate industry around large-scale programmes to help mitigate risk, enabling Europe’s satcom sector to achieve a competitive leap forward with the concurrent economic returns.

Last year EDRS-C completed its mechanical tests with flying colours. These replicate the brutal treatment it and its delicate laser communication terminal will receive as they are launched atop an Ariane 5.

First, the spacecraft had to pass IABG’s impressive shaker table, as all 3500 kg of it was hoisted onto the platform and subjected to intense vibrations, similar to the ones it will experience as the launcher’s 30 m tall boosters deliver 1340 t of thrust each to lift it out of our atmosphere.

All the while, the spacecraft was monitored carefully by engineers from IABG and EDRS-C’s manufacturer, OHB System, who declared the test successful after two weeks.

Following that, EDRS-C spent two days in IABG’s massive acoustic test chamber, which simulated the roar of the Ariane’s engines.

The satellite was wheeled into the solid concrete laboratory, set in its launch configuration and hooked up to hundreds of sensors, before being blasted with up to 140 dbA – the equivalent to what an Ariane 5 produces during lift off, which is more than any commercial jet airliner at take-off.

IABG and OHB engineers watched EDRS-C throughout the test via a camera, and observed the satellite’s response via the data pouring in from the sensors.

Finally, both solar arrays and all antennas – including those belonging to Avanti’s HYLAS 3 hosted payload – successfully completed their ‘hot deployment’ test, which used the actual equipment that will free them from their stowed launch configuration in space after separation from the fairing.

The satellite is now undergoing the final functional test, which will confirm both the integrity of its hardware and onboard software.

This will be followed by a verification of the antennas’ performance in the Compact Antenna Test Range in Airbus Ottobrunn, with shipment to its launch site in Kourou in May.

The first EDRS node was launched in January of 2016, and is currently serving the EU’s Copernicus Sentinels. EDRS-C will double the system’s capacity once it is launched, completing the development of a sustainable end-to-end system up to in-orbit validation.

In addition to Copernicus, EDRS will start relaying information from the International Space Station’s Columbus module next year.

As a commercial service operated by Airbus, the system is also open to new customers – the first and only of its kind.