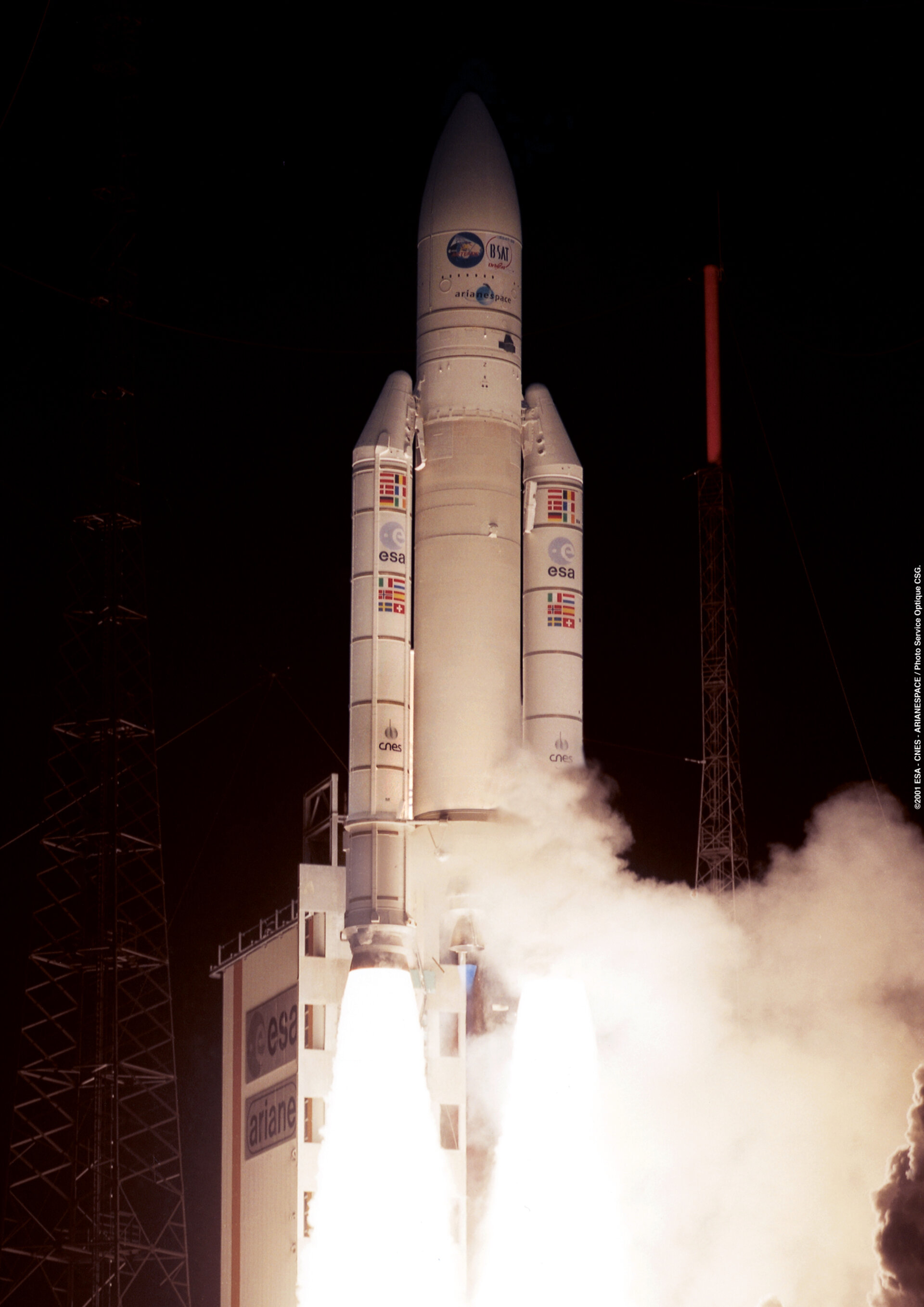 ESA PR 43-2001. ESA's Artemis telecommunications satellite is fully under the control of the Altel (Alenia Spazio-Telespazio) operations team and system engineers in Fucino, Italy, supported by a team of ESA specialists, after a successful first orbit-raising manoeuvre last night.

The satellite was launched by an Ariane 5 on Thursday 12 July from Kourou but was left in a degraded orbit due to a malfunction in the launcher's upper stage. Artemis was injected into an orbit with a perigee of 590 km, an apogee 17 487 km and inclination of 2.94°, compared to expected values of 858 perigee, 35 853 apogee, and 2° inclination. Since injection into orbit the spacecraft's behaviour has been nominal. The solar arrays were partially deployed, according to plan, some two hours after launch and started delivering the power required for operation. Several calibrations and simulated apogee firings have been performed in the last few days to prepare for the orbit manoeuvres described below.

The recovery strategy adopted aims to bring the satellite to the nominal geostationary position and to maintain chemical propellant and xenon (the gas used for the electrical ion-propulsion system) to maximise the lifetime of the spacecraft, originally planned to last 10 years.

The combined ESA/Alenia Spazio-Telespazio team has jointly selected a four-step strategy for bringing Artemis from the current non-nominal orbit to the geostationary orbit, as follows:

Step 1: The apogee boost motor (using chemical propulsion) is operated during several perigee passes (at the shortest distance from Earth) to increase the apogee (the maximum distance from Earth) to about 31 000 km. The perigee will not be raised by very much. Ground stations at Fucino (Italy), Malindi (Kenya), Perth (Australia), Goldstone (USA) and Kourou (French Guiana) will monitor the satellite.

Step 2: The elliptical orbit is then circularised by a number of apogee and perigee manoeuvres resulting in a quasi-circular parking orbit with the satellite at 31 000 km above the Earth and an orbit duration of about 18 hours. On completion of this step, the solar arrays will be fully deployed, as will the antenna reflectors. The satellite will then be in nominal mode, while not yet in geostationary orbit.

Step 3: With the satellite in the parking orbit, nominal spacecraft commissioning (activation and checking that all satellite elements are operating correctly) will be carried out, as far as is possible, in this sub-geostationary orbit.

Step 4: The satellite will then be "spiralled" from the parking orbit to the nominal geostationary orbit using the satellite's electrical ion-propulsion system.

The first apogee boost motor burn at perigee was successfully accomplished yesterday evening (18 July) between 17:19 and 17:39 CEST. Ground controllers reported that all went well and that the satellite has now been raised to an apogee altitude of 19 164 km (the perigee moving to 609 km, with no change in the inclination of 2.9°).

The end of step 2, i.e. arrival at the parking orbit, is planned for the next few days. Step 3 will last about 2 months, during which the commissioning tests will be performed and preparations will be made for raising the orbit. Step 4 is expected to start at end of September and will last several months.

This recovery scenario is the one which offers the best chances of bringing the satellite from the degraded injection orbit to the nominal geostationary position and saving enough chemical fuel and xenon to support some years of nominal operation. The amount of fuel and the resulting remaining lifetime can be predicted only after completion of step 2, albeit with some uncertainty.

The recovery activities involve a number of unusual operations which could not be planned for in advance. A particular case in point is the use of the electrical ion-propulsion system, for which a new mode of operation has to be defined.

The next progress report will be published on completion of step 2.

A Video News Release for TV Broadcasters will be available on Friday 20 July from 04:30-04:45 GMT on Eutelsat W1. For more information on the TV transmission, please consult http://television.esa.int or contact Medialink at +44.207.554.2704