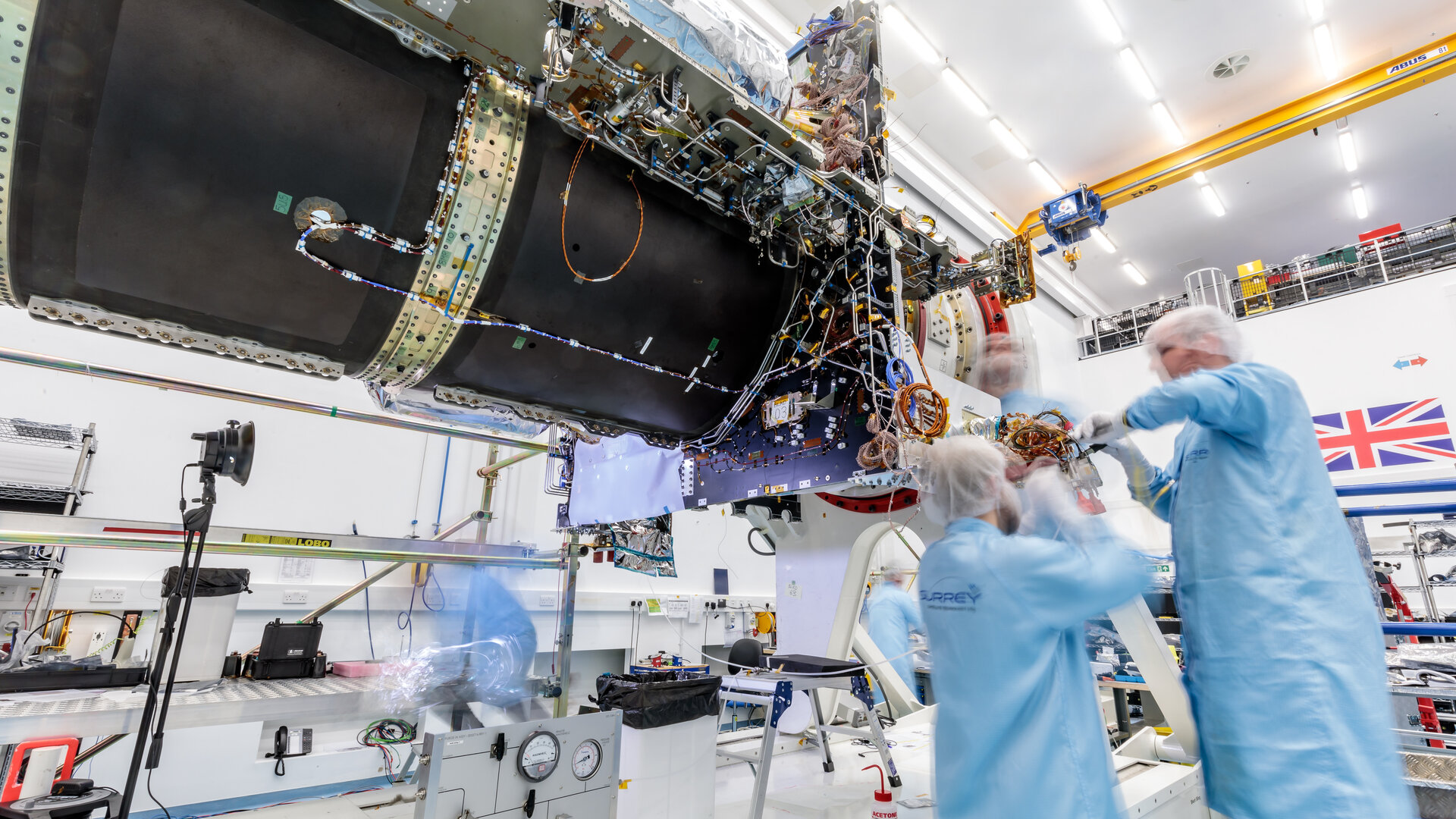 The last component of British-built chameleon satellite, Eutelsat Quantum, is getting ready to leave home for good.

The final piece of equipment is part of the new SSTL platform; the chassis that provides a payload with structure, power and the ability to propel itself through space.

Representing a major first for the company, the platform weighs in at just over 1 tonne, which is an order of magnitude bigger than any other satellite they have built in the past.

The new technologies aboard – the home-grown structure, momentum wheels and gyros – contribute to the platform enabling SSTL to enter the global geostationary satellite market.

It will soon travel from SSTL Guildford to join the rest of the mission’s technologies in Airbus France, where it will be mated with its ground-breaking payload.

Eutelsat Quantum is the first satellite capable of being completely reprogrammed after launch.

It is nicknamed the ‘chameleon’ satellite because of its software-driven approach, meaning all manner of changes can be made to the mission while it is in orbit, like adjusting the satellite’s coverage, frequency, power, and even orbital position.

It marks a shift from the traditional custom-designed, one-off payloads and is a first for all parties involved.

The telecom satellite is developed under an ARTES public–private partnership between ESA and Eutelsat, who will operate the satellite and use its flexibility to respond to the ever-evolving market much more effectively.

Yohann Leroy, Eutelsat Deputy CEO and Chief Technical Officer, said: “Eutelsat Quantum is a world-first and reflects the culmination of many years of research and evaluation driven by Eutelsat, and supported by major partners such as the ESA, the UK Space Agency, and Airbus. It will bring unprecedented agility and flexibility to our customers in the government, mobility and data markets: innovation will not only come from the ability to adjust coverages in real time in order to allocate resources between beams and regions but also from the fact that customers will be able to take command and optimise capacity use autonomously.”

Much of Eutelsat Quantum’s cutting-edge equipment was manufactured by Airbus in the UK, who shipped the payload to their French facilities in December. It is currently being tested and will be integrated onto the platform later in the year.

Expanding SSTL’s product line in this way is expected to open as-of-yet untapped markets for the company. Today, they opened their doors for people to come and view the pioneering platform before it leaves their cleanroom.

Sarah Parker, SSTL Managing Director said: “The completion of our work on the Eutelsat Quantum satellite platform is an important milestone for SSTL as it represents our first venture into the global commercial telecoms satellite market. The design and assembly of this innovative spacecraft has enabled us to advance the knowledge and skills required to develop highly capable satellite products for the evolving telecoms market, where we are now actively engaged in seeking new opportunities.”

Magali Vaissiere, ESA Director of Telecommunications and Integrated Applications, said: “Eutelsat Quantum is an important programme for both the UK and ESA and a typical example of the success of the ARTES public–private partnership model. Above all, our priority is our industry’s health and readiness for future market challenges. Partnerships like these that improve the competitiveness, competence and business prospects of the companies we support are what we dedicate our efforts to.”

Graham Turnock, UK Space Agency CEO said: “Communications satellites like Eutelsat Quantum that can be reprogrammed to adapt coverage, connectivity and orbit could until recently be considered the stuff of science fiction.

“Through our €480m development funding in the European Space Agency’s ARTES programme, together with the government’s Industrial Strategy and partnering with industry leaders, we are helping UK businesses transform ‘the stuff of science fiction’ into commercial advantage, resulting in jobs, growth and innovation.”