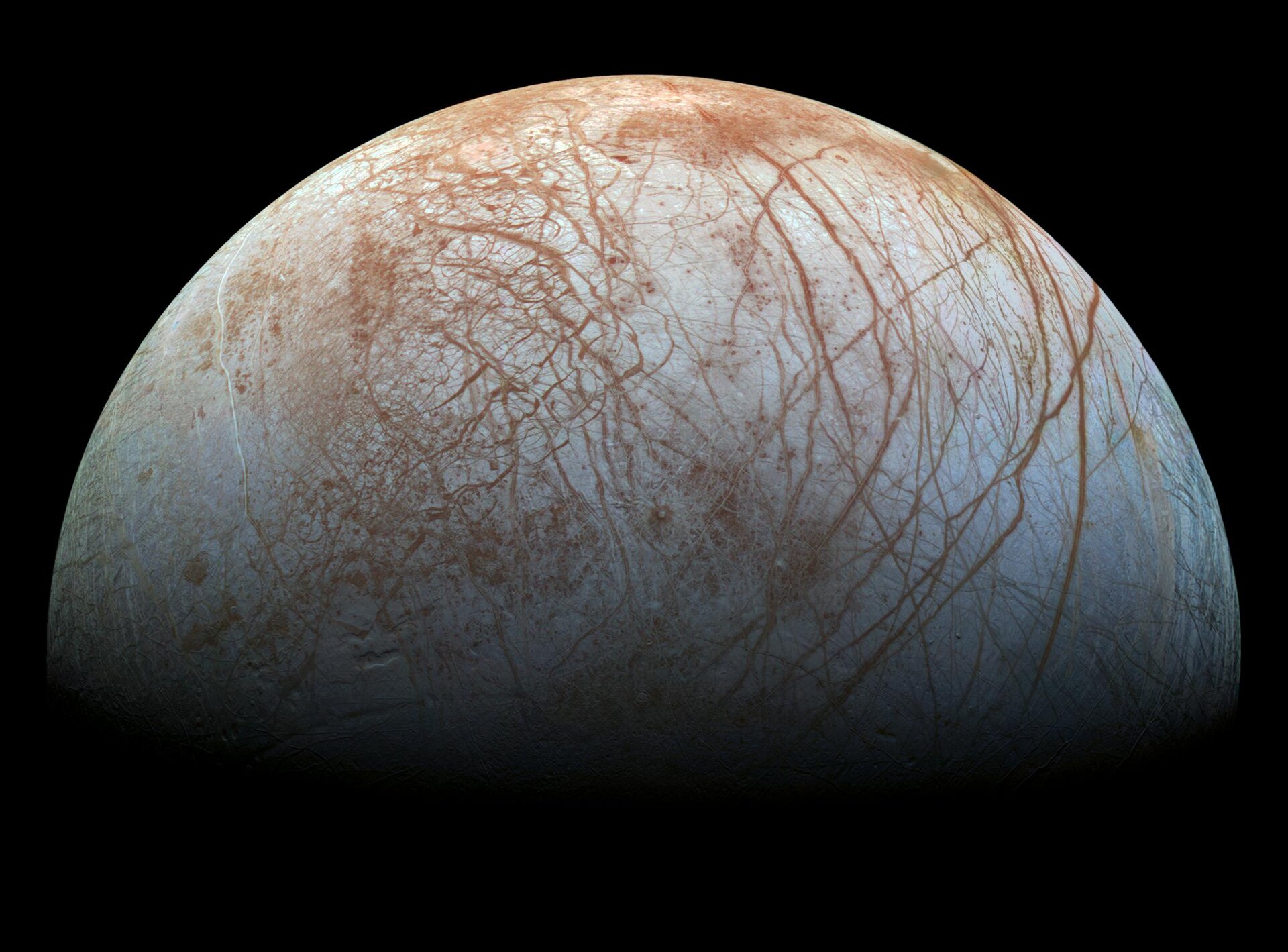 Jupiter’s moon Europa is a fascinating world. On its surface, the moon appears to be scratched and scored with reddish-brown scars, which rake across the surface in a crisscrossing pattern. These ‘scars’ are etched into a layer of water ice, which is thought to be at least several kilometres thick and covering a vast – and potentially habitable – subsurface ocean.

The scars seen in this view of the moon from the archives of NASA’s Galileo mission – based on images taken by the spacecraft in the 1990s – are a series of long cracks in its icy surface, thought to arise as Jupiter tugs at Europa and breaks the ice apart. The colours visible across the moon’s surface are representative of the surface composition and size of the ice grains: reddish-brown areas, for instance, contain high proportions of non-ice substances, while blue-white areas are relatively pure.

Scientists are keen to explore beneath Europa’s thick blanket of ice, and they can do so indirectly by hunting for evidence of activity emanating from below. A new study, led by ESA research fellow Hans Huybrighs and published in Geophysical Research Letters, did exactly this. Building on previous magnetic field studies by Galileo, the simulation-based study aimed to understand why fewer than expected fast-moving protons – which are subatomic particles with a positive charge – were recorded in the vicinity of the moon during one of the flybys of the moon performed by the Galileo probe in the year 2000.

Researchers initially put this down to Europa obscuring the detector and preventing these usually abundant charged particles from being measured. However, Hans and colleagues found that some of this proton depletion was due to a plume of water vapour shooting out into space. This plume disrupted Europa’s thin, tenuous atmosphere and perturbed the magnetic fields in the region, altering the behaviour and prevalence of nearby energetic protons.

Scientists have suspected the existence of plumes at Europa already since the times of the Galileo mission, however indirect evidence for their existence has only been found in the last decade. Excitingly, if such plumes are indeed present, breaking through the moon’s icy shell, they would offer a possible way to access and characterise the contents of its subsurface ocean, which would otherwise be hugely challenging to explore.

These prospects are of great interests to ESA’s upcoming Juice mission, planned for launch in 2022 to investigate Jupiter and its icy moons. Juice will carry the equipment needed to directly sample particles within the moon’s water vapour plumes and also to detect them remotely, aiming to reveal the secrets of its vast, mysterious ocean.

Scheduled to arrive in the Jupiter system in 2029, the mission will study the potential habitability and the underground oceans of three of the giant planet’s moons – Ganymede, Callisto and Europa. As this new study demonstrates, tracing the energetic charged and neutral particles in Europa’s vicinity offers huge promise in efforts to probe the moon’s atmosphere and wider cosmic environment – and this is precisely what Juice plans to do.

Olivier Witasse, ESA’s Juice project scientist, is also a co-author on the study, along with a number of ESA research fellows, including former Science Directorate fellows Lina Hadid and Olivier Lomax, Mika Holmberg, a research fellow in the Technology, Engineering and Quality Directorate.

The new study is based on data collected by Galileo during a flyby of Europa in 2000. The image comprises data acquired by the Galileo Solid-State Imaging (SSI) experiment on the spacecraft's first and fourteenth orbits through the Jupiter system, in 1995 and 1998, respectively, and was recently re-processed in 2014. The image scale is 1.6 km/pixel, and the north pole of the moon is to the right.