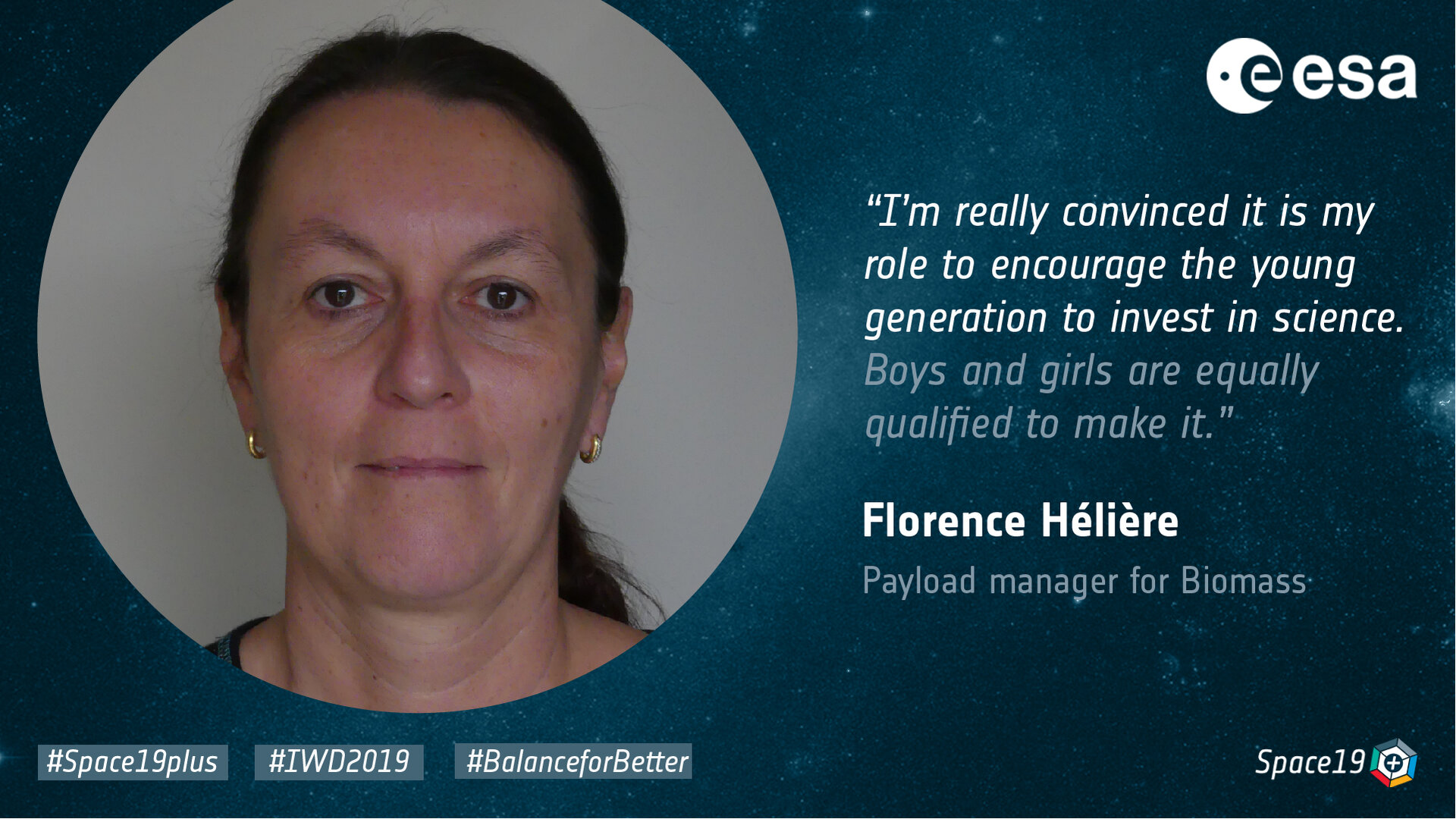 I joined ESA in 2007 as a Payload Engineer in the microwave instrument pre-development section of the Earth Observation Directorate. In 2014, I was appointed as Payload Manager on the biomass project. I think I was the first woman in a manager position in the Earth Observation project department at that time.

Biomass is an Earth Explorer mission, whose objective is to quantify the height and volume of trees. Forests are an important contributor to the carbon cycle, which is crucial to the mitigation of global warming. As Payload Manager, I am responsible for the definition, development and validation of the synthetic aperture radar (SAR) instrument.

As a teenager, I was already very interested in science. Encouraged by my mathematics professor, I applied for an engineering course known as ‘Grandes Écoles’ in the French education system, which is very competitive, and I graduated as an engineer at just 23 years old. As part of my degree, I had two traineeship periods at the French Space Agency (CNES) in Toulouse and I really loved it. I discovered remote sensing and the power of processing to extract valuable information out of a microwave signal. CNES was working on SAR interferometry, which was a totally new technique in the 1990s and CNES published several scientific papers on this. I really enjoyed being a part of that and being able to contribute to this endeavour. This is probably when I realised that working on space projects was really a source of motivation for me. Then, after 14 years of experience in industry, I heard about the position of payload engineer in Earth Observation and I joined the Agency in 2007.

Since the start of my career in 1993, and even during my higher education course, I have been used to working in a male environment. It never made any difference to me and it never affected my enthusiasm and motivation to do my job at the highest level. When applying for a management position, I noticed that women are not necessarily perceived as being potential candidates. But I didn’t notice real barriers in my career. With a high level of motivation, women can access the same positions as men. It is just a matter of willingness and effort to convince people that you are able to succeed in a management position.

In the Agency, I have noticed that the number of women in the field of engineering is increasing slightly among the younger generation. I have also noticed an increase in the middle hierarchy, the level to which I belong. In the Earth Observation Directorate, the number of female section heads is now eight out of a total of 52. This is progress compared with when I joined the Agency.

What are, in your view, three measures that could make a difference in supporting a work-life balance and at the same time equal career opportunities?

Measures for supporting a better work-life balance are beneficial for all, men and women. In the last five to 10 years, several measures were put in place at ESA, like the flexitime system, teleworking, and access to childcare. This did not exist when I joined the Agency. This is clearly good to have in place. To improve the work-life balance, I would say facilitate access to paternity leave. I have noticed that in Germany, France and the UK, it seems to be more and more common for men to enjoy longer paternity leave.

Regarding equal opportunity, this is a different topic where constant improvement is necessary. In particular, we cannot ignore that there is unconscious bias, which can hamper an organisation’s attempts to achieve diversity. Of course, selecting a candidate whom you know, or who is known to one of your colleagues, gives confidence in his/her capacity to fulfil the job. This has the drawback that we tend to induce a selection of similar profiles and goes somewhat against diversity. If, in addition, you add the fact that the composition of review boards is generally based on at least two or three levels of hierarchy from the same group, there is a clear risk of unconscious bias in the recruitment process. In this respect, I would suggest increasing board diversity and investigating what could be done to reduce potential bias. I have heard about companies providing special training sessions to increase bias awareness before starting a recruitment process.

Finally, I would say another important factor in building a career is certainly the networking that is somewhat linked to the bias mentioned. In this respect, it would be good to develop mentorship. I heard about it at the time of the organisation renewal process, but I’m not sure if this idea has already been further developed in the Agency. Maybe for newcomers?

I would say: Just do it! If you really like science, you will make it. I’m convinced that it is also my role – and the role of many of us – to encourage the younger generation to invest in science. The world needs science to progress and the brightest young people to become engineers or scientists. Their gender does not matter. Boys and girls are equally qualified to do it.