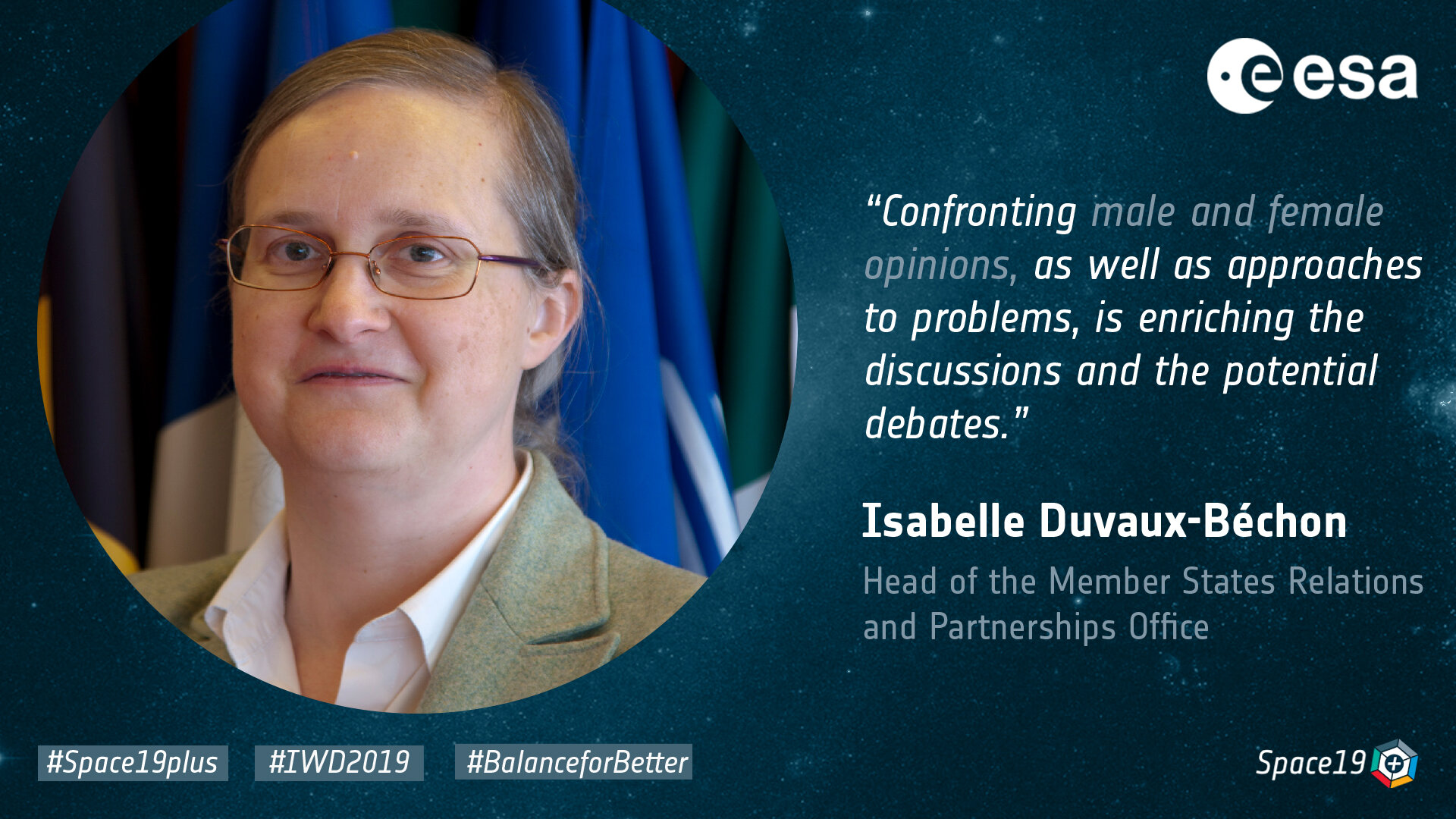 Currently, I am working in the Strategy Department, heading an office that is in charge of ensuring smooth relationships with our 22 Member States and coordinating a certain number of initiatives or partnerships aimed at improving the way space can help solve global challenges (supporting sustainable development, addressing the Arctic, African, Atlantic, Mediterranean or Alpine challenges).

I started at ESA 31 years ago, first in scientific and technical activities (microgravity experiments), then also on the International Space Station (ISS) programme, finance, budget, education, advanced concepts, studies… This gave me a good overview of ESA. Even though I am no longer in the core of engineering (I am an engineer by training), I still use my engineering and scientific skills on a daily basis.

As far as I can remember, I was fascinated by space (I saw the first step on the moon when I was a child) and as I was good at maths and physics, so I decided to study engineering. This was the ‘natural’ path in France. And my final year of study was focused on ‘Air & Space engineering’. I had the chance to do some training at ESA while studying, thanks to one of my father’s friends who was a director there. He gave me good advice: even if you are interested in ESA, start working in industry in order to get involved in projects so that you are not just managing them without knowing much about them. I followed this advice, spent four years in industry, and one day had the opportunity to apply at ESA to become the exact counterpart of the role I had in industry. The ESA projects were motivating and I was lucky enough to be chosen. One of the elements of motivation was that the post was in Paris (not so much the case for CNES or most of industry). My husband was working in the Paris area and was likely to stay in Paris for most of his career. So it was also a choice of location…

Not really. My mother’s parents prevented her from studying to get a job (a woman has to take care of her husband and children!), so it was important to her to make sure that her three daughters could study to become independent in life. And for me, in France, if you were good at scientific subjects, the ‘traditional’ studies were at the ‘Grandes écoles’ (studying engineering at university in France at the time was not really possible or the standard was very poor). Of course, it was still an uncommon choice as only 10 percent of students in my engineering school were women (still only 15 percent now, nearly 40 years later). I have also learnt years after I entered ESA that there were two of us competing for the job – one young man and me – and that the selection board wondered whether it was wise to hire me as there was a chance that I would have babies and thus take some leave. Still, they chose me and indeed I had to take some leave in the next years. This was well accepted, though, because I think I carried my job out well. So I did not get any real gender barriers to become an engineer, still I have the feeling that once “in the job”, progression was slower as the time of maternity is quite “neutralising” for progression and promotions.

The presence of women is increasing slightly and efforts are being made at junior / intermediate level. Even so, there aren’t many women in the top positions (one director and very few heads of department). This is a challenge for the future: to achieve a better balance.

What are, in your view, three measures that could make a difference in supporting a work–life balance and at the same time equal career opportunities.

Propose measures for both men and women to foster support at home from men! Too often the wife / mother is the one who is also in charge at home, or at least more so than the father, and it can be too much… Identify role models / mentors.

Just go for it. It is sometimes not easy, but the presence of women is less and less questioned. Confronting male and female opinions as well as approaches to problems is enriching the discussions and the potential debates. Be aware that the problems you might be faced with are often not specific to science and engineering. Instead they are just work problems or work–life balance issues that can occur in any field or organisation.