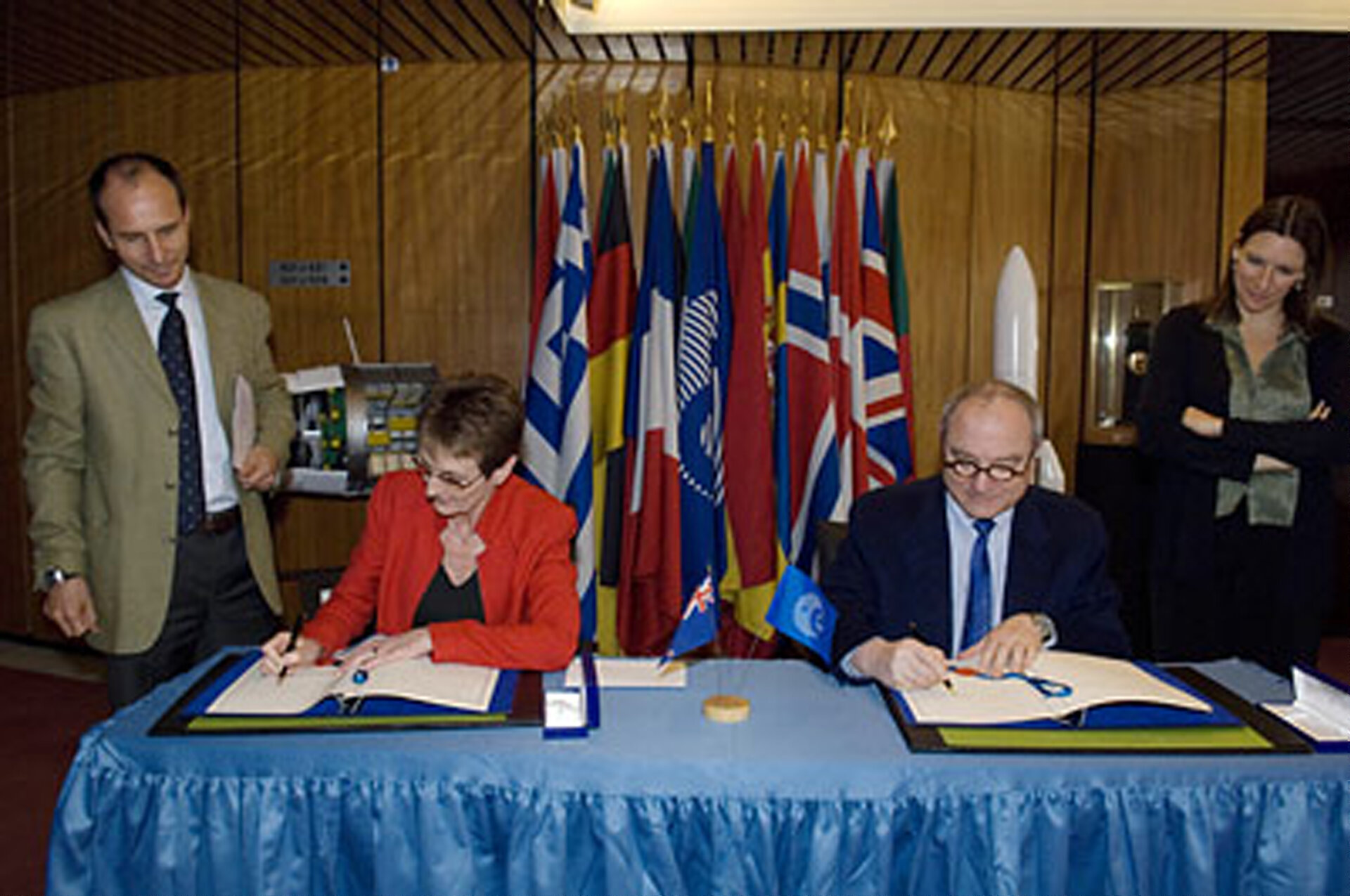 ESA PR 17-2007. Today ESA Director General Jean-Jacques Dordain and Her Excellency Ms Sarah Dennis, New Zealand's Ambassador to France, signed an arrangement on the installation of a transportable telemetry station to track the Ariane 5 launcher that will carry into orbit ESA’s Automated Transfer Vehicle (ATV) for its maiden flight in autumn this year.

Europe's ATV will be one of the vital supply craft for the International Space Station, delivering equipment and spare parts as well as food, air and water for its permanent crew. Once docked to the ISS, the ATV will serve to re-boost the space station; then, as part of a controlled re-entry, it will burn up in the Earth’s atmosphere, disposing of waste material no longer needed on the ISS.

For the launch of the first ATV, named Jules Verne, the Ariane 5 launcher has been specifically adapted (*). The launcher will place the ATV in a 260 km circular orbit inclined 51.6° to the equator. From this orbit the ATV will use its own propulsion system to automatically reach and dock with the ISS.

The mission analysis for this specific Ariane 5/ATV flight confirmed the need to monitor over southern Oceania (Australia and New Zealand) the separation of the ATV, its injection into the target orbit and the third ignition of the launcher’s upper stage.

ESA decided to expand the existing Ariane ground tracking and telemetry station network for this purpose. An initial survey mission took place in New Zealand in March 2004, the aim being to find a suitable setting for a transportable telemetry station, able to satisfy the very stringent visibility requirements imposed by the mission.

After extensive preliminary analysis, a site in the Awarua area of Invercargill was eventually selected due to its excellent visibility of the trajectory. The preparatory works (civil works, road adaptation, concrete platform, power, telecommunications, fences, etc.) started in January of this year, with final site acceptance expected by mid-May. The site preparation works, funded by ESA, represent an investment of over €200k.

The tracking station, which will be used for the Ariane 5/ATV Jules Verne mission, is being leased by the French space agency CNES- Guiana Space Centre and supplied and operated by the OTB-Overberg Test Range, South Africa, under a CNES contract.

Ariane 5 ES is derived from the Ariane 5 G+ and Ariane 5 ECA versions. It has the same lower composite as Ariane 5 ECA and will use exactly the same solid propellant boosters as the Ariane 5 ECA version, as well as the same cryogenic main stage equipped with the improved Vulcain 2 engine. The upper composite has a new reinforced vehicle equipment bay (VEB) to withstand ATV flight loads and a re-ignitable storable propulsion stage. For the ATV mission, the re-ignition capability has been incorporated to maximise the launcher's performance in terms of the target orbit and to meet mission requirements.

A first storable propulsion stage ignition takes place immediately following separation of the cryogenic main stage. The engine is then cut off and the VEB-storable propulsion stage-ATV composite commences a ballistic phase of about 45 minutes, at the end of which a second ignition occurs for a short duration before the ATV is separated and injected into the target Low Earth Orbit.

A third and last ignition is then carried out to enable the almost empty VEB-storable propulsion stage composite to re-enter the Earth's atmosphere. There it safely destructs in the upper layers of the atmosphere.