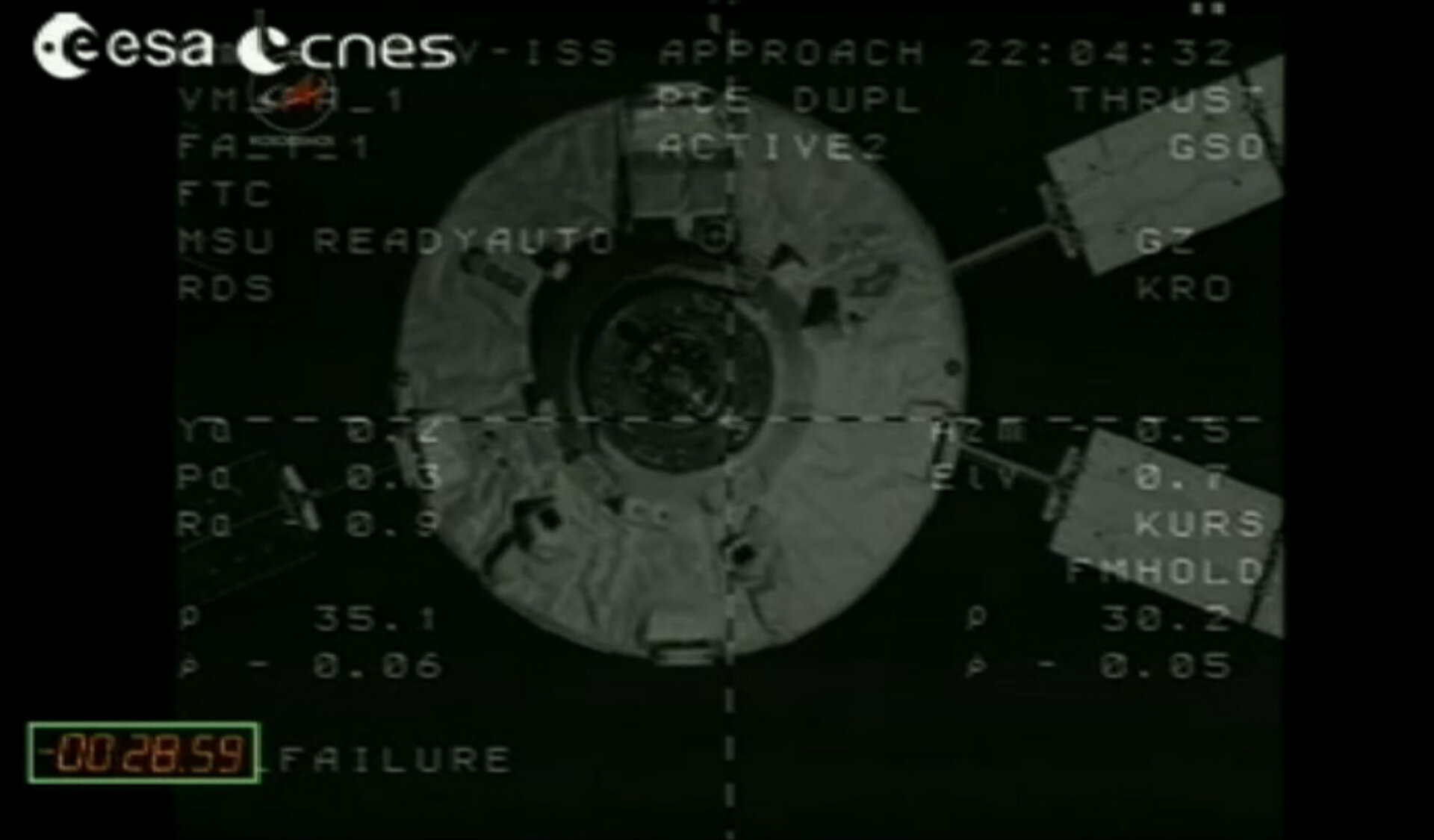 PR 10 2012 - ESA’s ATV Edoardo Amaldi has completed the first stage of its docking with the Russian Zvezda module of the International Space Station.

The docking probe is now retracting, to be followed by the hooks between the two craft closing. The data and electrical connections will then be established.

The 20-tonne vessel, flying autonomously while being continuously monitored from the ground, docked with the 450-tonne orbital complex with a precision of 6 cm as they circled Earth at more than 28 000 km/hr.

“No-one should consider that this smooth and gentle docking between these two giant spacecraft is either an easy or routine task,” said Thomas Reiter, ESA’s Director of Human Spaceflight and Operations.

“The technologies we have demonstrated in operational conditions with the ATVs have a tremendous potential for future human spaceflight and exploration missions.”

The docking concluded a step-by-step approach to the orbital outpost by the large freighter. The vehicle manoeuvred autonomously during these critical operations, monitored by a separate onboard control system to ensure the safety of the Station and its crew.

The ground teams at the ATV Control Centre in Toulouse as well as ESA astronaut André Kuipers and his crewmates on the Station were also watching the approach, in case a hold or an abort had to be ordered.

Like its predecessors, ATV-3 has a multifaceted mission. As a space tug, it is loaded with 3150 kg of propellant to reboost the Station’s orbit to compensate for the natural decay in altitude caused by atmospheric drag or to move it from the path of potentially hazardous space debris. ATV also provides attitude control when other spacecraft are approaching the Station.

As a space tanker, it is delivering 860 kg of propellant, 100 kg of oxygen and air, and 280 kg of drinking water, all to be pumped into the Station’s tanks.

As a space freighter, it carries 2200 kg of dry cargo such as scientific equipment, spare parts, food and clothes for the astronauts.

During the five months it will spend docked to the Station, it will act as a temporary space module, providing 45 cubic metres of extra crew quarters on the orbital outpost. On previous missions, ATV was welcomed by the astronauts as “the quietest place in the Station” and was often the preferred area for working.

At the end of its mission, scheduled for 27 August, ATV-3 will separate from the Station, packed with waste bags. The following day, it will be directed to burn up safely in the atmosphere during reentry over the South Pacific Ocean.