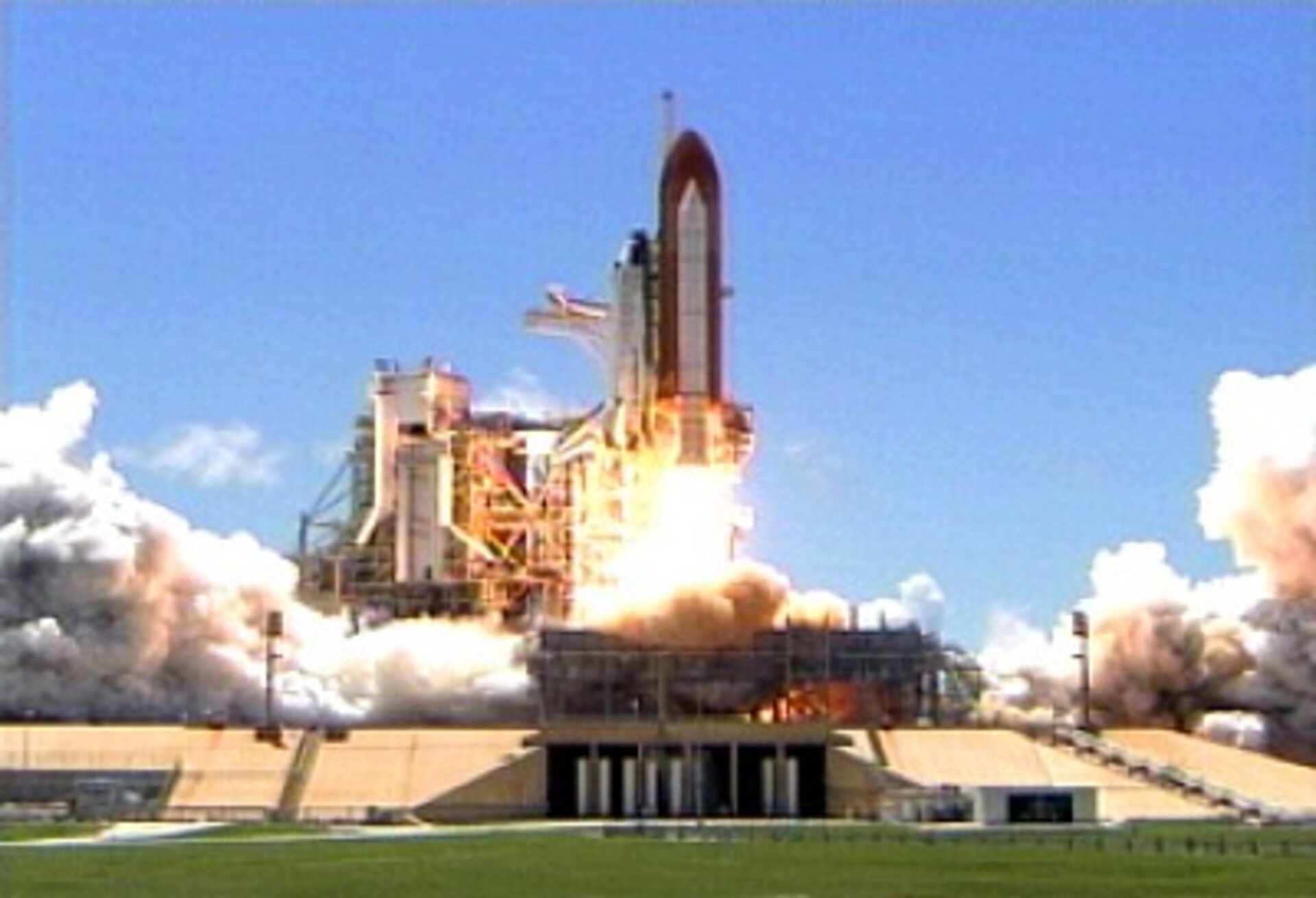 ESA PR 23-2006. As the Shuttle returns to flight and prepares the way for the resumption of International Space Station assembly, a European astronaut is - for the first time ever - heading for the orbital outpost to take up duty as a member of its permanent crew. His mission, dubbed Astrolab, is planned to last through to the end of the year.

This evening, Space Shuttle Discovery lifted off from NASA’s Kennedy Space Center in Cape Canaveral, Florida, at 20:38 CEST (18:38 UTC) and successfully entered low Earth orbit after almost 8 minutes powered flight. On this STS-121 mission, the first Shuttle flight in almost a year, Discovery is carrying a crew of seven, including one ESA astronaut: Thomas Reiter, from Germany.

The first day in space will be devoted to a series of in-flight inspections to ensure that Discovery did not suffer any damage following its launch. The orbiter will then manoeuvre to rendezvous with the Space Station. Docking is planned for Thursday 6 July. Shortly thereafter, Thomas Reiter will install his tailor-made re-entry seat on the Russian Soyuz ferry ship currently docked with the ISS. This event will mark his change of status from Shuttle to Station crew member.

While his fellow Shuttle travellers are due to return to Earth on Sunday 16 July at 14:52 CEST (12:52 UTC), or on the following day if the mission can be extended, Thomas Reiter will be staying onboard the Station for up to six or seven months. His mission is being conducted under an agreement between ESA and Roskosmos, the Russian federal space agency, with Reiter taking a position originally earmarked for a Russian.

An ESA astronaut since 1992, Reiter is back in space for the second time, but already has experience of long-duration spaceflight. Ten years ago, he spent 179 days during ESA’s EuroMir 95 mission onboard the Russian space station Mir.

Onboard the International Space Station, Thomas Reiter will join the current permanent crew as flight engineer, reporting to Russian commander Pavel Vinogradov, who flew to the ISS with NASA flight engineer Jeffrey Williams onboard Soyuz TMA-8 in March. This will be the first time since May 2003 that there has been a permanent crew of three onboard. The crew size had to be reduced as long as the Shuttle was unavailable for logistics and servicing. This boost will enable the astronauts to devote more of their time to conducting science experiments, in addition to seeing to overall Station maintenance.

Thomas Reiter will also be the first non-US, non-Russian astronaut to become a permanent crew member. In the future, he is due to be succeeded by more ESA, Japanese or Canadian astronauts. As flight engineer, he will be in charge of vital tasks regarding ISS guidance and control, environmental control and life support systems, power control and communications, crew health & safety and extra-vehicular activities. He will become the first ESA astronaut to have performed a spacewalk from the ISS. Here again he is a veteran, having performed two EVAs during the EuroMir mission.

In September, Vinogradov and Williams will return to Earth and be replaced by NASA commander Michael Lopez-Alegria and Russian flight engineer Mikhail Tyurin, with whom Reiter will continue his mission.

For the Astrolab mission, Thomas Reiter will conduct a series of onboard science and technology experiments. This programme of experiments was devised by science institutions from all over Europe and covers many different research fields including human physiology (cardiovascular system, bone mass, eye motion, immune system, respiratory system, etc.), astronaut psychology, microbiology, complex plasma physics and radiation dosimetry. He will also perform technology demonstrations (3D camera) as well as industrial and educational experiments for universities and primary/secondary schools. Reiter and his crewmates will also taste high-quality food specially designed in order to improve the lot of astronauts far away from planet Earth.

Discovery’s launch confirms the return-to-flight of the Space Shuttle, after more than three years of uncertainty following the loss of Columbia in February 2003. It is due to confirm that Shuttle launches can proceed and give the go-ahead for the resumption of ISS assembly flights.

A further 17 Shuttle flights are scheduled to deliver additional elements to the Space Station complex, including new modules, truss sections and solar arrays, through to 2010. These elements are currently in storage at Kennedy Space Center. Among them are several European-built items, including the Node 2 and 3 modules, which will make a key contribution to Station assembly by increasing the number of docking ports, and the Cupola observation module, the first panoramic window on space. One of the most important European assets for the ISS has just arrived in Florida: the Columbus laboratory, a unique science facility designed to accommodate state-of-the-art research equipment for more than a decade of experimentation. The Station’s continued assembly will also be made possible by the logistic servicing flights of ESA’s Automated Transfer Vehicle, the unmanned cargo ship to be launched by Ariane.

Some ESA equipment designed to improve ISS capabilities is already flying onboard Discovery inside the Italian-built Leonardo Multi Purpose Logistics Module and will be integrated on the Station by Thomas Reiter and his crewmates. Among these is the first of three ESA-developed Minus-Eighty degrees Laboratory Freezers for the ISS (MELFI). These advanced-technology freezers were developed for the long-term conservation of biological samples and experiment results at -80° C, and their eventual return to Earth. Other ESA-supplied equipment being delivered on STS-121 includes the European

Modular Cultivation System, a facility designed to grow plants in space, and the Percutaneous Electrical Muscle Stimulator, a device developed for human physiology experiments. In addition, replacement hardware will upgrade some existing ESA equipment already onboard, such as the Microgravity Science Glovebox.

The Astrolab mission is also the first long-duration human spaceflight to the ISS to draw on the support of a European control centre, as a rehearsal for a future expanded ESA presence onboard the Station with the arrival of the Columbus laboratory.

The Columbus Control Centre at Oberpfaffenhofen, Germany is also home to the European Payload Operations Centre, which is coordinating European experiment and payload operations onboard the ISS while monitoring the activities of Thomas Reiter. The Control Centre will be the hub of activity, backed up by a network of User Support and Operations Centres throughout Europe, with the European Astronaut Centre in Cologne providing medical support.

For Daniel Sacotte, ESA Director of Human Spaceflight: “Astrolab is a milestone mission for human spaceflight in Europe. Thomas is just the first to go and more will follow. Even if our astronauts will not be permanently on the Space Station over the coming years, we have to prepare for having them onboard very often and for long durations. It is really the beginning of a long-term European human presence in space.”

As Jean-Jacques Dordain, ESA Director General, underlines: “Europe is a visible and reliable partner in one of the most complex projects ever carried out in space, with Thomas onboard this year and with the launches of Columbus and the first ATV servicing mission next year. Thanks to the commitments of its partners, in particular NASA and the Russian space agency, as well as the commitments of its Member States, ESA can actively prepare for utilisation of the Space Station and, beyond that, for its contribution to the exploration of the solar system.”

According to NASA’s Space Shuttle launch manifest, Thomas Reiter is currently expected to return to Earth on Shuttle flight STS-116, with another ESA astronaut Christer Fuglesang of Sweden accompanying him.