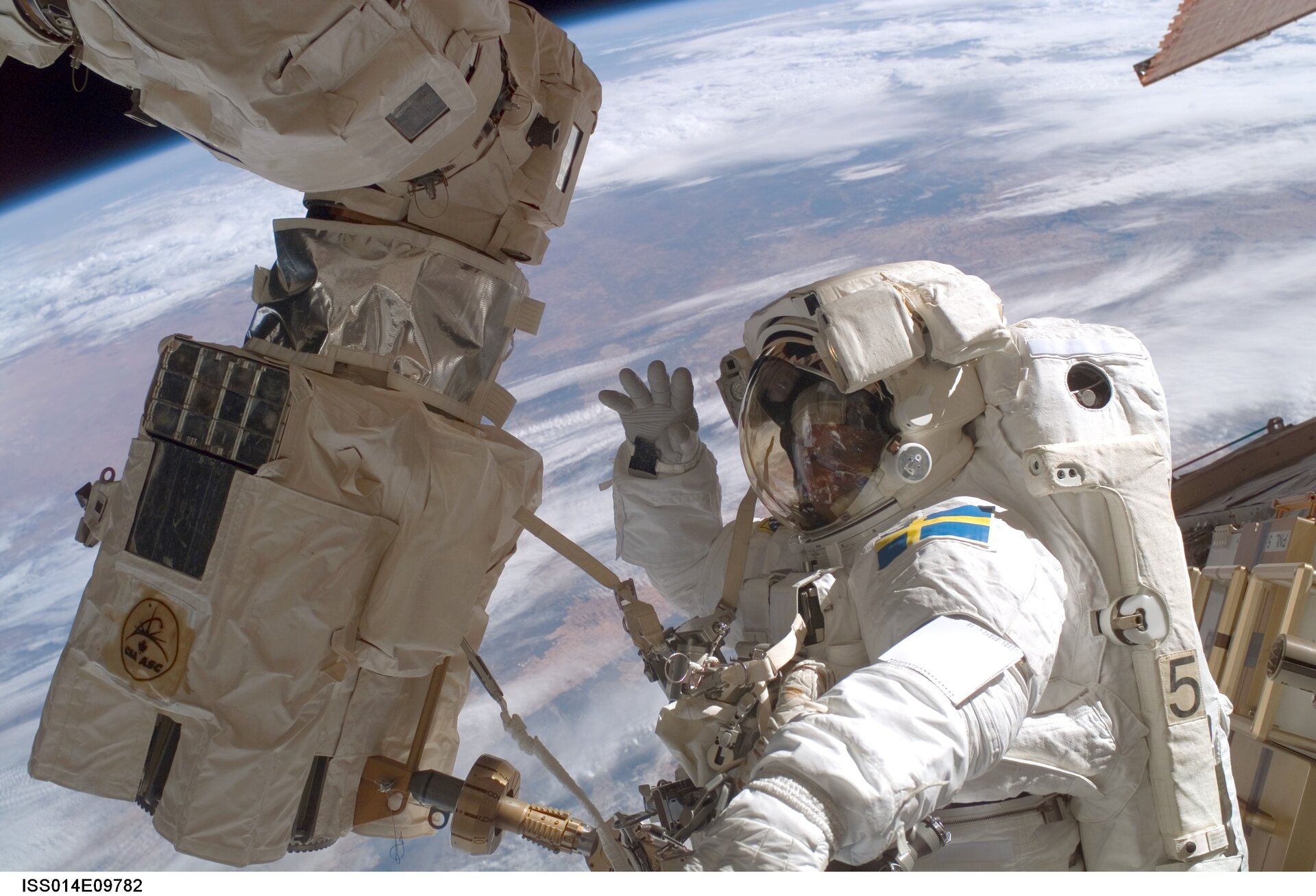 "It was a wonderful flight, extremely exciting. I couldn't have asked for more." Ahead of his visit to his home city of Stockholm, in Sweden, which starts today, ESA astronaut Christer Fuglesang spoke about his recent Celsius Mission.

On Friday 22 December 2006, Fuglesang, the first Swedish astronaut in space, returned to Earth with Space Shuttle Discovery with the rest of the STS-116 crew at the end of the 13-day mission to the International Space Station. During the STS-116 mission Fuglesang participated in three Extra Vehicular Activities (EVAs), or spacewalks, to continue assembly work on the outside of the Station.

"I enjoyed every minute of it. I am very grateful to everyone who helped me to get there. In particular everyone at ESA, there are a lot of people who have supported me for many years."

What was it like to be inside the Shuttle for the launch?
"The launch was a real highlight! I was never really nervous, which did kind of surprise me. I didn't really dare to believe that we were really going because of the weather. The launch can also be scrubbed just one second before take-off, because of some technical problem. Until the big solid boosters are lit and you start to move, you never know. Once we left, it was of course a wonderful feeling – 'Yes! We are really going!' When we got into space – everyone was shouting and laughing."

What was it like to see the ISS for the first time?
"First there was just a really big bright star- when it came closer and you could see the details, it was big and beautiful. When you get close to dock, it's really big!"

What was it like when you first entered the Station?
"You enter into the lab – it is such a big space that you can be in the middle and not be able to touch anything. You feel a bit dizzy for the first minutes, when you have been used to the Shuttle where there is less space."

Can you describe what it was like when you first stepped out of the Airlock for the first spacewalk?
"It was different than planned! We had a very well choreographed plan for the way everything was supposed to be done. When Beamer [Robert Curbeam] egressed, he managed somehow to get a door open where the hand control of the SAFER [spacewalk backpack] is. So suddenly we had a new problem that needed to be solved. I actually had to go out the Airlock to try to fix this - it wasn't something we had trained in the pool, so I wasn't sure that I would be able to. But it worked out, and it gave me self-confidence for the rest."

"It is a wonderful view when you are out there, and you can see the Earth and see the big Station. Translating along the truss, I enjoyed that a lot. You can just give yourself a little push and you float a few metres without touching anything."

How did you feel at the end of the second spacewalk, when you had to return inside?
"I felt a little bit sad. Particularly because we had resources to stay out for another hour and I was hoping they would come up with something else for us to do – but no one said anything. I tried to hang outside there for as long as I could before we had to go inside. I was very pleased when I got to do the third one!"

You trained extensively for this mission, was there still anything that surprised you?
"Something that was complicated was to go to the toilet… particularly what the Americans call 'number 2s'. Due to weightlessness the intestines are not the normal way, so you have to work really hard to get things going. It can get quite uncomfortable."

Did you get much of an opportunity to look down at Earth, and what where the most impressive things that you saw?
"I didn't have as much opportunity as I would have liked to, we were very, very busy. After undocking we started to get a bit more time. The orientation of the Shuttle meant we also got a better view. I was particularly please the first time I saw Sweden. We also saw the Aurora over Sweden - that was beautiful."

"One of the best passes though was the very last day. It was night-time over Europe. We came in over Ireland, over England; I could see London. You could clearly see the Netherlands because there was so much light. Then I saw all of the Scandinavian countries, even the southern coast of Norway – I could see clouds covering Oslo which were lit up. I could see up to the middle of Sweden and Finland – Helsinki. On the opposite side of the gulf, Tallinn and St Petersburg. It is just like flying over a map. The light tells you where the cities are, and then just the complete darkness over the water – it was a beautiful pass."

What have you been doing since the landing?
"I had to go into NASA on Christmas Eve and Christmas Day for data taking for some of the experiments – and then on the 26th we had a big medical exam. On 27 December we started with meetings to prepare for the debriefings and the presentations which we have to start giving very soon. I had just four days off over the New Year. Since then we've been in daily debriefings. I've just come back from EAC [ESA's European Astronaut Centre, in Cologne, Germany] where we had debriefings on Monday and Tuesday this week."

What kind of things do you report back on during the debriefings?
"Anything from minor technical details which didn't work very well - for example, a camera that was lost during one of the EVAs because of a screw that wasn't really working properly. Through to the overall message for us – we thought there was excellent team work, which helped to make this mission such a success. There was a really good connection between us and the ground crew – they trusted us and we trusted them. It was like we were not only their prolonged arm, but also kind of a prolonged brain to help to give inputs."

How was your re-adaptation to gravity when you came back?
"My balance was very affected. It felt a bit like you had been drinking heavily. But it came back fairly quickly. On the second day it was barely noticeable, and by the third day it was completely back. The first time I went jogging, five days after we returned, I got a lot more muscle soreness than I would usually get for such a short run."

When does your mission completely come to an end?
"I will be on the road for at least for half of the time through to April. We are going to visit all the NASA centres with the crew. We are making a crew trip to Europe – the highlights being Scandinavia, EAC and to ESTEC. There are a few things still for the experiments – taking post-flight data – I will be finished with them in another couple of months."

Did you expect that Sweden would be enthusiastic about your flight?
"Two months before the launch I saw how it was building up, so I did expect some interest – but I never imagined that it would be to that extent. When we had an in-flight call and it was both the Crown Princess and the Deputy Prime Minister there, it was really nice!"

Do you have any longer-term plans as an astronaut?
"I will spend a couple of months in Europe this summer, partly working at EAC. Then I will be back here in Houston in the autumn and I hope to get another assignment with the Shuttle. I would like to do a long-duration mission."