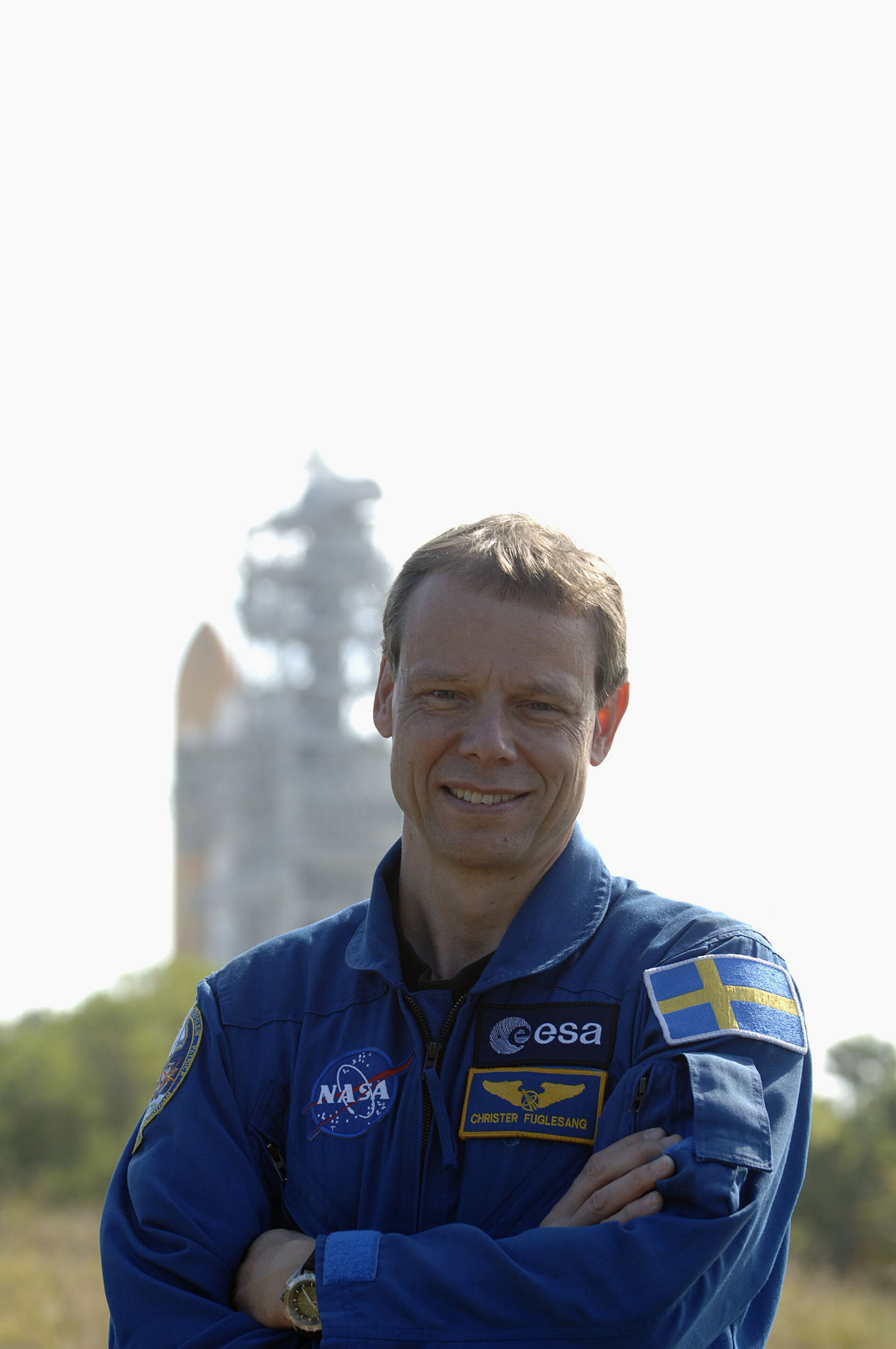 Christer Fuglesang is not only an astronaut, he is also a scientist: a particle physicist to be precise. Although most of his time on board the ISS will be spent on construction assignments, he will also carry out some serious science during his mission.

The majority of astronauts come from a background of working as a pilot or an engineer, Christer Fuglesang is one of relatively few scientists. He studied at the Swedish Royal Institute of Technology (KTH) and after obtaining his Master's degree in 1981 he began graduate studies in experimental particle physics at the University of Stockholm. To assist him in his research he also spent considerable time at CERN, the European Centre for Particle Physics in Geneva, Switzerland. In 1987 Christer was awarded his PhD and in 1991 he was made associate professor at the Institute.

These days Christer does not have much time for anything else apart from his astronaut training but he still strives to maintain his scientific skills. One reason is to maintain social contacts with his old colleagues the other is because he enjoys the creative thinking needed for science as astronaut training is more geared toward perfecting well-rehearsed drills.

Flashes in the eye or in the brain?

One of the projects Christer is working on is ALTEA, a study of the effects of cosmic radiation on the brain. Many astronauts, from the days of Apollo and Skylab onwards, have reported seeing light flashes when their eyes are closed, usually a few to several minutes apart.

Scientists have long known that the source of these flashes is the particles in cosmic radiation. However, many questions remain, as scientists still do not know which particles are causing the flashes or how they are generated.

"We do not know whether the flashes come from the eye, and consequently are caused by reactions inside the eye, or if they originate in the visual centres of the brain," says Mark Pearce, a research associate of Fuglesang who is also an associate professor at KTH. "Hopefully ALTEA will help us find out."

Does every flash mean that a cell in the retina dies? Are the flashes an indication of invisible damage that the high-energy particles cause in other tissues, for example in the brain? It is questions like these that scientists hope ALTEA will help them answer.

ALTEA was developed by the Italian Space Agency ASI. Its predecessor was another Italian study called Altino, an experiment carried out by Italian ESA astronaut Roberto Vittori, during his Marco Polo mission to the ISS.

"The ALTEA study fits well with Christer's research as he initiated a similar project called SilEye that ran on the Russian space station Mir between 1995 and 1999," comments Pearce.

ALTEA is a kind of helmet. It contains six particle detectors that together can make a 3D reconstruction of how particles travel through the brain. During the experiment the astronaut presses a button when he or she sees a flash and an EEG is taken of the astronaut's brain activity.

The ALTEA helmet is already on board the ISS. The Expedition 14 crew, which includes German ESA astronaut Thomas Reiter, are taking part in the experiment as will Sunita Williams, Christer’s crew mate on board the shuttle and members of the Expedition 15 crew, scheduled to arrive at the ISS in April 2007.

A DESIRE for knowledge

Christer will be involved in another experiment on the ISS called DESIRE (Dose Estimation by Simulation of the ISS Radiation Environment). Although this is not a specific part of the Celsius mission, Christer has been involved in the DESIRE project since 2001 in collaboration with one of his graduate students. Basically DESIRE is an Earth-based computer model of the ISS that uses dosimeters - devices used to measure exposure to hazardous environments – placed on the ISS.

Software calculates radiation doses on the ISS and compares them to experimental radiation readings obtained from the ISS modules: Destiny and Node 1. DESIRE will focus particularly on Columbus, the laboratory module that ESA plans to send to the ISS next year. The model calculates what happens when particles hit the ISS and the level of radiation to which astronauts are exposed in different parts of the station.

"The first step is to calibrate the software," says Mark Pearce. "This entails measuring the radiation levels inside the ISS and comparing them to the measurements made in the lab."

The second part of the project will simulate the environment inside the European Columbus laboratory. "An accurate system for assessing these kinds of hazards will be extremely important for long-duration voyages such as, for example, a journey to Mars. Of course to achieve this it is vital to have dependable software." Pearce adds.

The DESIRE project is funded by ESA and the Swedish National Space Board.

On the Order of the Integral

A little-known fact about Christer Fuglesang is that in 1980 the physics section of the students union at KTH awarded him their highest honour: the Order of the Integral for his "remarkable contributions in the services of the section", a recognition of his work helping to integrate new students, and organising and leading the singing at student parties during his time at KTH.

Although he will have very different tasks to perform on the ISS, Christer this treasured memento of his years at KTH will travel with him on his journey into space.