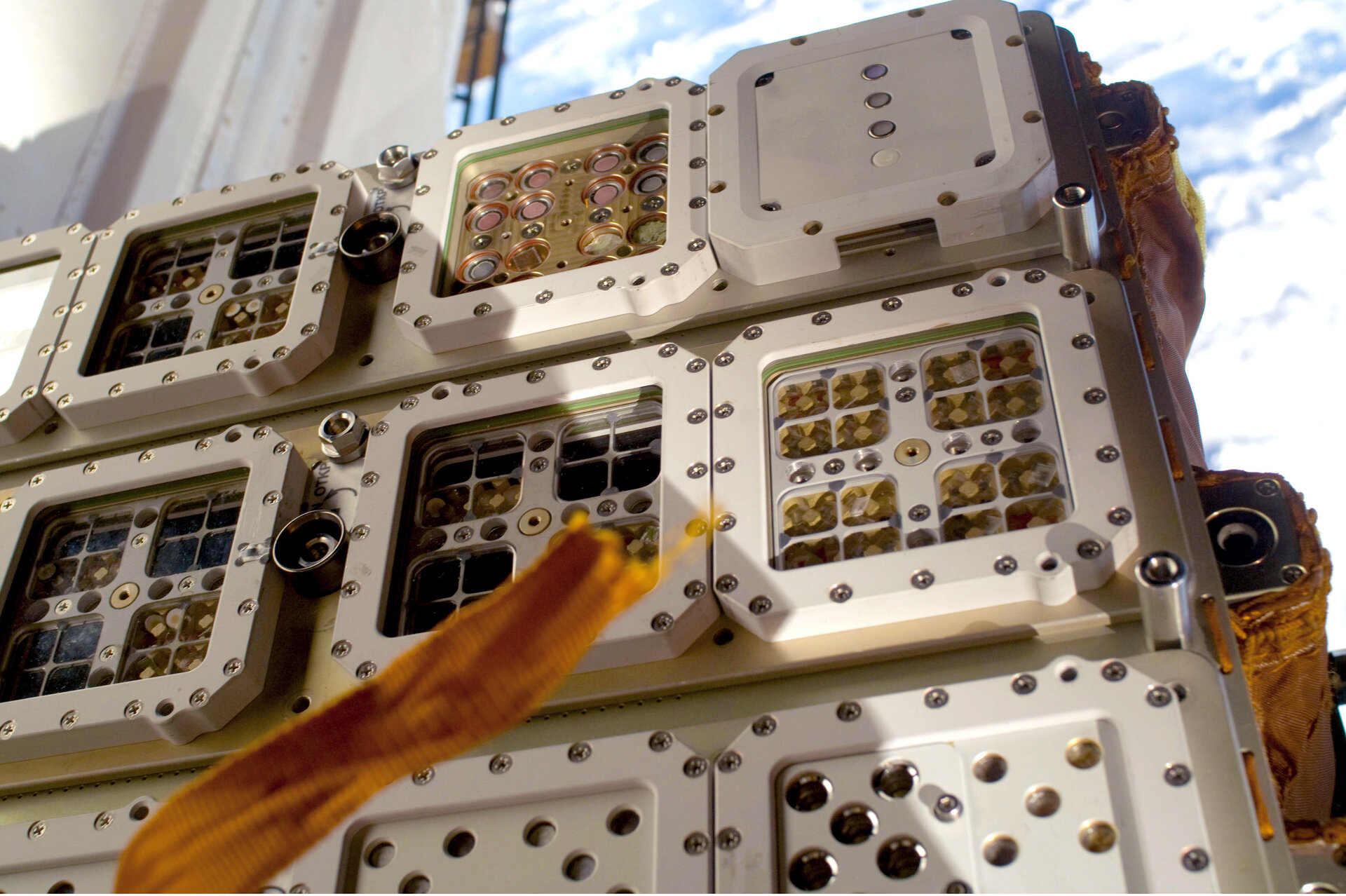 Space is a hostile environment for living things, but small organisms on the Expose-E experiment unit outside Europe’s Columbus ISS laboratory module have resisted the solar UV radiation, cosmic rays, vacuum and varying temperatures for 18 months. A certain lichen seems to be particularly happy in open space!

Here on Earth, living organisms can be found almost everywhere, from the abysses of the oceans to the highest mountain peaks. Even extremely dry deserts and cold glaciers support some kind of life.

Recent findings from martian meteorite samples provide stronger evidence that life might have existed within our neighbouring planet too, so perhaps there is also some kind of life on the red surface of Mars.

To find out how our terrestrial organisms survive in space conditions, ESA has backed astrobiological research for more than 20 years. “The purpose is to increase our knowledge on the origin, evolution and adaptations of life and also provide an experimental basis for recommendations for planetary protection,” says René Demets, a biologist working in ESA.

The most recent experiment carrier was Expose-E, launched to the International Space Station (ISS) in February 2008 aboard Space Shuttle Atlantis and carried back to Earth by Space Shuttle Discovery last September. A total of 664 biological and biochemical samples were exposed to open space for 18 months.

Expose-E is a suitcase-sized box divided into two layers of three experiment trays, each holding four squared recesses. All but two of these 12 boxes hold a suite of biological or biochemical samples in small compartments.

Two of the three trays were directly exposed to the vacuum of space and the third has gas inside, simulating the thin martian atmosphere consisting mainly of carbon dioxide. The window protecting the ‘martian samples’ also had an optical filter imitating the solar spectrum on the martian surface. Two layers of similar experiment trays were used, to have one layer on top exposed to solar light and another underneath in shadow.

An almost identical experiment carrier, Expose-R, remains at the ISS, where it is installed on the Russian part of the station.

It’s better to be dry

Expose-E samples were provided by eight international scientific groups and the project is coordinated by the Microgravity User Support Centre (MUSC) at the German Aerospace Center (DLR) under the European programme for Life and Physical sciences and applications using the International Space Station (ELIPS) of ESA’s Directorate of Human Spaceflight. The research groups are now examining the samples and have released some preliminary scientific results.

“These Xanthoria elegans lichens were flown on Expose-E and they are the best survivors we know,” explains Demets. Lichen is a sort of macroscopic composite organism of a fungus and a photosynthetic partner that is typically alga or cyanobacterium.

“These can be found typically in the most extreme places on Earth. When they are put in an environment they don’t like, they put themselves in off-mode and wait for better conditions. Once you put them back in a suitable environment and give them some water, they just carry on living as before.”

The key issue is water: it is almost immediately vaporised in the vacuum of space. Only anhydrobiotic organisms, which are dry and capable of sustaining long periods in extremely dry conditions, can survive space vacuum. Apart from lichens, only a few animals and plants can resist the vacuum: water-bears, brine shrimp and larvae of the African midge Polypedilum vanderplank are the only animals known to survive open space. Some dried plant seeds are also dry enough.

Other space hazards are the repeated extreme temperature changes and radiation. “Radiation is a big danger for life in space”, says Demets. “Cosmic rays are very energetic and ionising, but the most damaging is the hard UV radiation from the Sun. Here on the ground, UV-C is used mainly in applications where you need to kill bacteria.” Over time the effects of high-energy particles, X-rays and gamma radiation are more important, because they destroy DNA and cause genetic mutations.

MUSC is conducting a parallel ground simulation exposing similar samples to the same environmental parameters as in space, with the exception of low gravity and ionising radiation. “This simulation will last throughout the whole mission and after this we will have the final results,” says Demets. “I can’t wait for that moment, because we already know that we’ll have interesting results.”

The fact that living organisms do survive in open space seems to support the idea of panspermia – life spreading from planet to another, or even between solar systems. “The loose end in this theory is now arrival at a planet, because no living thing can survive the fiery entry through an atmosphere,” Demets says. “But possibly deep inside a space rock the conditions are better. Therefore we’re now thinking of an astrobiology experiment involving a return to Earth”.