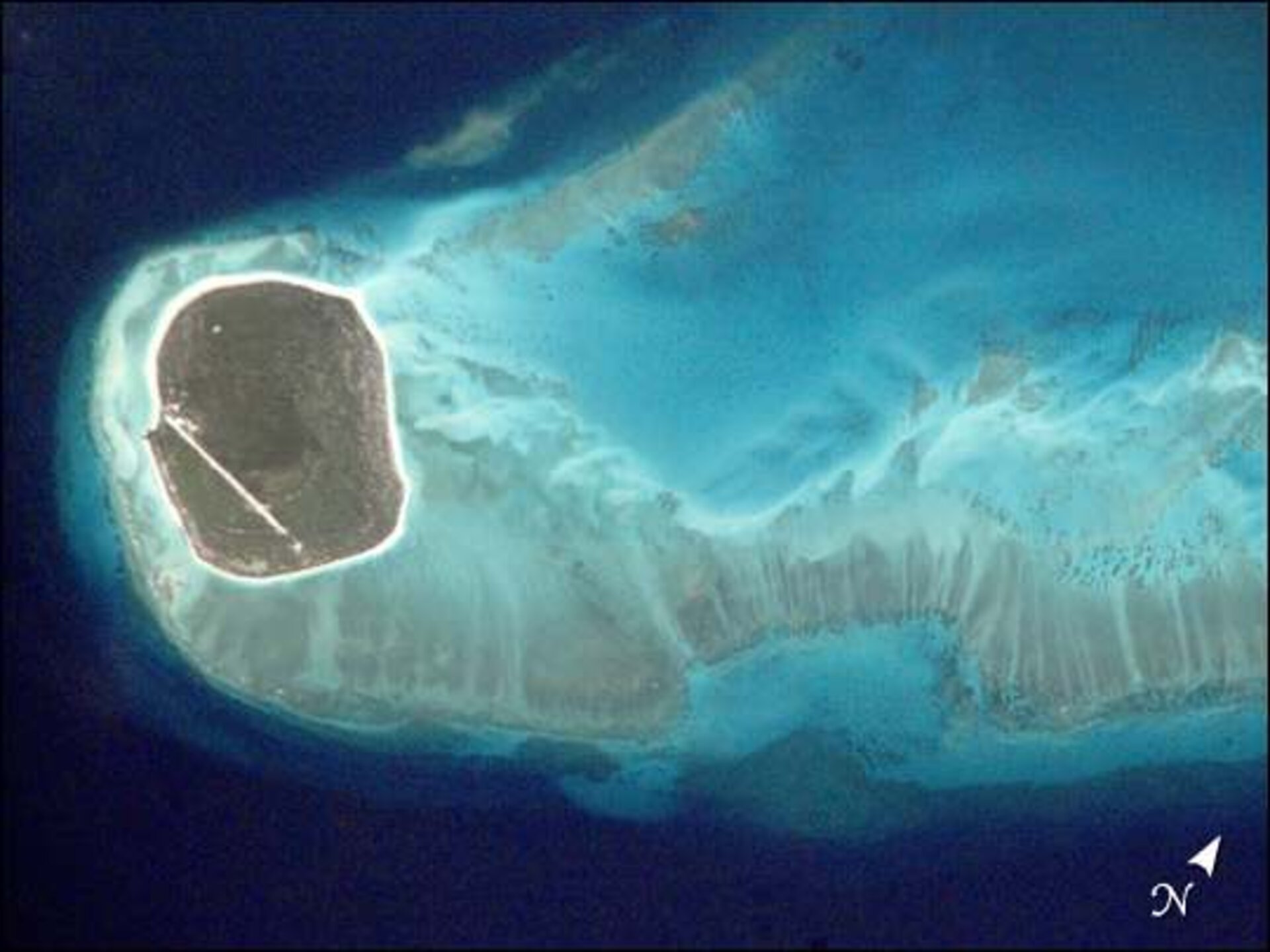 Coral reefs are a critical resource for many island and coastal nations, particularly in the tropical Pacific and Indian Oceans. These nations rely on the rich reef ecosystem to support local fisheries; additionally, the reefs serve as barriers that help protect coasts from significant waves and storm surges and bring in substantial revenue through tourism. Astronaut photographs of coral reefs taken from the International Space Station provide an important perspective on coral reef geography, coastal development, and related land habitats.

In recent years, the scientific community has recognized that reefs around the world are threatened by large scale processes such as global warming and associated sea level rise, ocean warming and acidification, and local human activities such as coastal development, over-fishing and heavy tourism (see Reefs at Risk and Mapping the Decline of Coral Reefs). Collapse of individual reef systems would spell disaster for local island nations and coastal societies dependent on reef resources. A global decline in reef systems carries significant implications for the oceans’ biodiversity, support for important fisheries, and more.

About a decade ago, several programs were initiated to map the extent of global reefs as a first step in understanding their geographic attributes and managing the resource (see Millennium Coral Reef Mapping). As these initiatives began, scientists recognized that 1) accurate maps of the world’s reefs were lacking; 2) detailed mapping of the reefs would provide more value to local resource managers; and 3) the remoteness of many reef systems would make detailed mapping difficult or impossible.

Astronaut images were identified as an important contributing resource because they provided better resolution than some remotely-sensed data, were generally cloud-free, and covered areas not traditionally imaged by remote sensing platforms. Astronauts consciously target beautiful reef areas as they orbited over the large expanses of oceans. Although not a prime source of remotely sensed data, astronaut photography of remote reef locations in the world’s oceans have provided valuable data that have been assimilated and fused into global databases that help to map reef systems, and monitor their changes. This information is critical for local reef managers.

Today, station astronauts routinely collect high resolution (5–6 m) digital imagery of the Earth’s reefs. Richard Stumpf of the National Oceanic and Atmospheric Administration or NOAA reported in a 2003 study that the images have been used by NOAA for water depth assessments. Additional collaborations have evaluated the influence of the spatial scale of the imagery on determining landscape parameters of atolls as reported by Serge Andréfouët of the Institute for Marine Remote Sensing, University of South Florida, in 2003, and scientists use the high resolution astronaut photography for planning dive surveys and other management activities according to a 2002 publication by Jean-Pascal Quod of the French initiative for Coral Reefs, or IFRECOR.

Photographing reef areas from the station is an established way to contribute to the global database of reef images and support coastal communities in managing their own reef areas. In the future, other space station sensors, such as the Hyperspectral Imager for the Coastal Ocean, or HREP-HICO, and International Space Station SERVIR Environmental Research and Visualization System, or ISERV, may also provide meaningful data for reef mapping activities.

The digital photograph above, taken from the space station, shows details of the reefs surrounding îles Glorieuses. The photograph served as a base map for detailed field mapping of the reef zones (geomorphology and ecology) by Agence pour la Recherche et la Valorisation Marines (ARVAM), based in Réunion, and partners. These maps supported biological inventories and surveys of coral reef health using established international protocols (Global Coral Reef Monitoring Network and Reef Check). The high spatial resolution of these astronaut photographs (about 5 meters per pixel) captures the detail needed to support this kind of detailed field research.