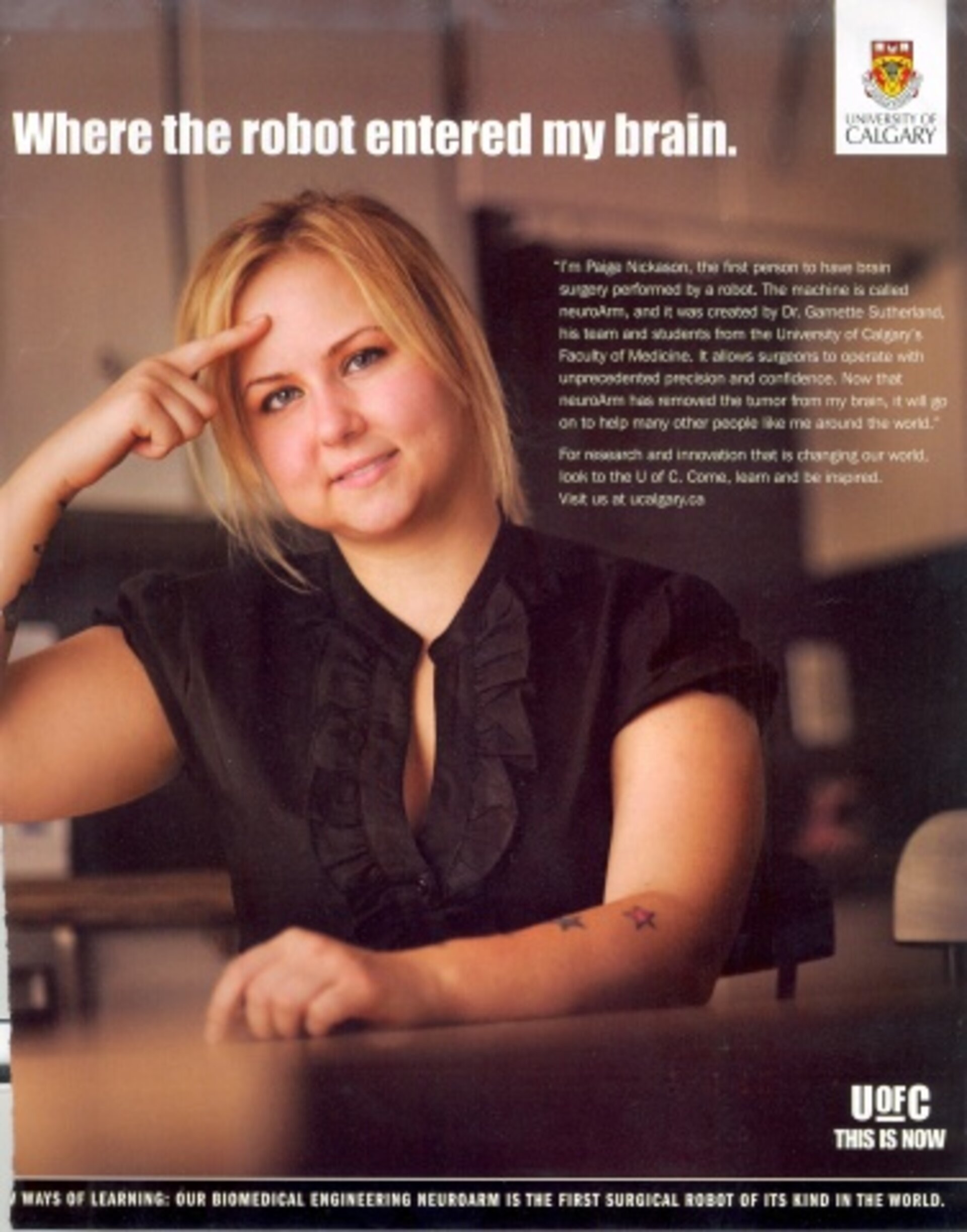 The delicate touch that successfully removed an egg-shaped tumor from Paige Nickason’s brain got a helping hand from a world-renowned arm—a robotic arm, that is.

The technology that went into developing neuroArm, the world’s first robot capable of performing surgery inside magnetic resonance machines, was born of the Canadarm (developed by MDA for the U.S. Space Shuttle Program) as well as Canadarm2 and Dextre, the Canadian Space Agency’s family of space robots performing the heavy-lifting and maintenance on board the International Space Station.

neuroArm began with the search for a solution to a surgical dilemma: how to make difficult surgeries easier or impossible surgeries possible. MDA worked with a team led by Dr. Garnette Sutherland at the University of Calgary to develop a highly precise robotic arm that works in conjunction with the advanced imaging capabilities of magnetic resonance imaging (MRI) systems. Surgeons needed to be able to perform surgeries while a patient was inside an MRI machine, which meant designing a robot that was as dexterous as the human hand, but even more precise and tremor-free. Operating inside the MRI also meant it had to be made entirely from nonmagnetic materials (for instance, no steel) so that it would not be affected by the MRI’s magnetic field or, conversely, disrupt the MRI’s images. The project team developed novel ways to control the robot’s movements and give the robot’s operator a sense of touch—both essential so that the surgeon can precisely control the robot and can feel what is happening during the surgery.

Since Paige Nickason’s surgery in 2008, neuroArm has been used to treat dozens of patients successfully. The neuroArm technology has since been purchased by IMRIS Inc., a private, publicly traded medical device manufacturer based in Winnipeg, Manitoba, Canada. MDA and IMRIS are advancing the design to commercialize a two-armed version of the system to allow surgeons to see detailed, three-dimensional images of the brain as well as use surgical tools and hand controllers that allow the surgeon to feel tissue and apply pressure when he or she operates. A clinical trial led by Dr. Sutherland is currently underway at Calgary’s Foothills Hospital using the first generation of the robot on a group of 120 patients. IMRIS anticipates being in a position to seek regulatory approval for the robot as early as 2012.

MDA is also continuing to apply its space technologies and know-how to medical solutions for life on Earth. The company has partnered with the Hospital for Sick Children (SickKids) in Toronto, Ontario, to collaborate on the design and development of an advanced technology solution for pediatric surgery. Dubbed KidsArm, the sophisticated, teleoperated surgical system is being designed specifically to operate on small children and babies. KidsArm is intended for use by surgeons in conjunction with a high-precision, real-time imaging technology to reconnect delicate vessels such as veins, arteries or intestines.

In collaboration with The Centre for Surgical Invention and Innovation (CSII) in Hamilton, Ontario, MDA is also developing an advanced platform for use in the early detection and treatment of breast cancer. The image-guided autonomous robot (IGAR) will provide increased access, precision and dexterity, resulting in more accurate and less invasive procedures.