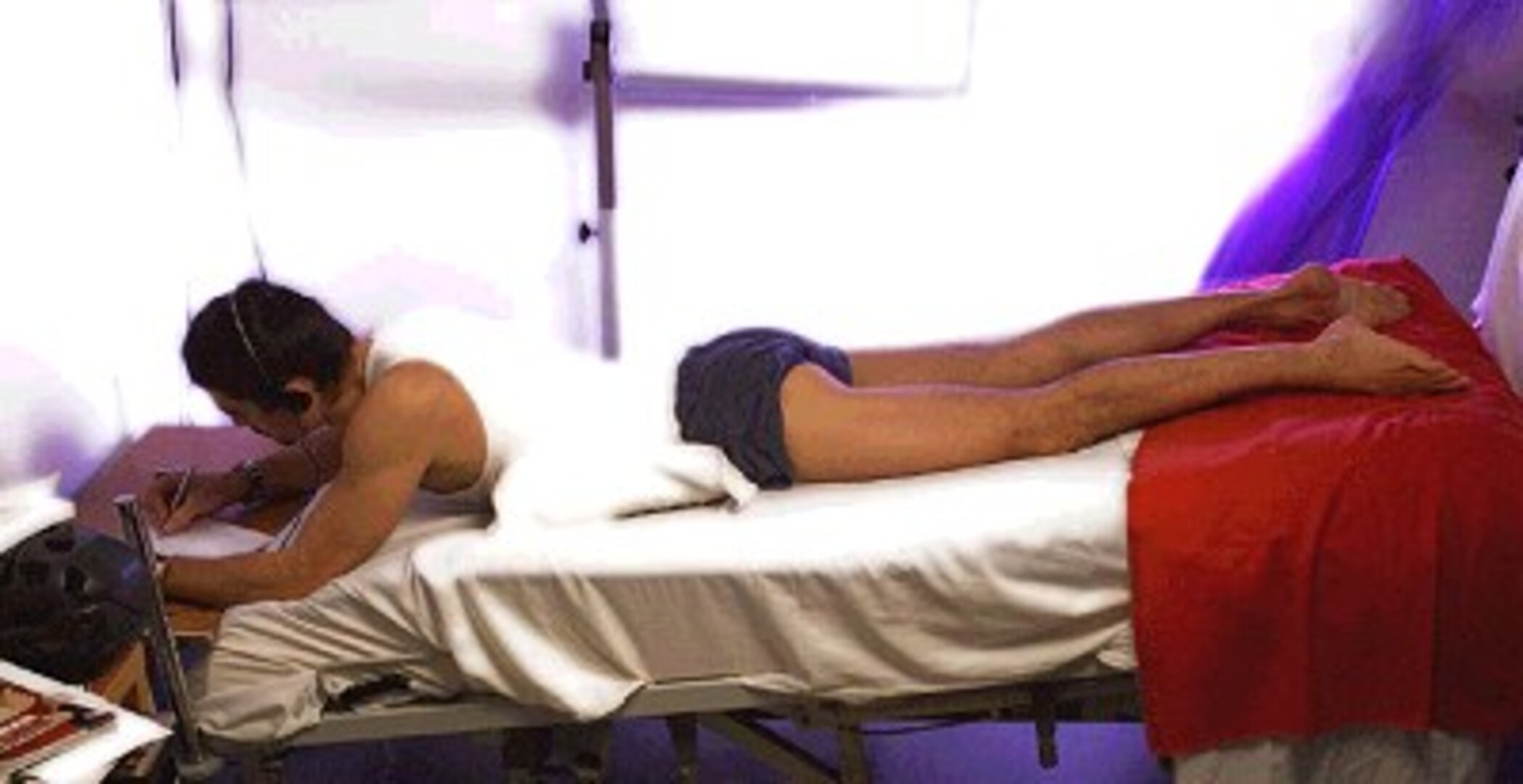 ESA PR 46-2001. Spending a long time in a weightless environment has an impact on the human body, and evidence exists of changes to the bone and muscles of astronauts who have participated in long-duration missions in space.

To cope with the requirements of long-stay missions aboard the International Space Station, the European Space Agency, together with the French space agency CNES and the Japanese space agency NASDA, are validating countermeasures through a preventive-medicine ground-based simulation that makes use of the bed rest model.

The study runs over two periods of four months, one starting in August this year, the other in March next year. Each time, fourteen test subjects will lie in bed for a period of three months, to produce sufficient scientific data. The total duration of each campaign is 120 days: 90 days in strict -6° head down tilt, with a preparatory period of 15 days beforehand and a 15 day recovery phase after. Previous studies, where the inclination varied from 0 to -15°, have shown that the -6° position is the best for simulating the effects of the weightless environment of space.

This is the first ever long-term bed rest study of such complexity and duration to be carried out in Europe. The main objective is to assess the changes to muscles and bone typically arising on long-duration space flight and evaluate methods of counteracting such changes. Additional experiments will also investigate the cardiovascular system and neuro-endocrine regulation of urine production, psychological behaviour and changes in the sleep-wake cycle. The study is also aimed at improving the medical aspects of healthcare for people afflicted with muscle and bone-wasting diseases.

The experiments have been proposed by European scientists in answer to an ESA announcement of opportunity, and by NASDA scientists for the research into bone physiology. A dozen scientific groups representing about eighty researchers are involved.

Throughout the study, the subjects will have to undergo many investigations such as tests during exercise, osteodensitometry (measurement of bone-density) and magnetic resonance imaging. Analysis of muscle biopsies and extensive biochemical analysis of biological samples will be performed.

Progress will be reported via a dedicated website at http://www.medes.fr

At the end of the study, the test subjects will be followed up with specialised medical check-ups at forty-five days, three months, six months and one year with a follow-up questionnaire after three years.

A team of medical and psychological experts from the MEDES Institute for Space Medicine and Physiology selected the candidates during the first half of the year and is in charge of the implementation of the study. The Toulouse-based institute has over ten years of experience of conducting bed rest simulation experiments. Since 1996 personnel from the "space clinic" have participated in six different bed rest studies.

Since the study has to be as homogeneous as possible, only male candidates aged between 25-45 have been selected. The fourteen test subjects selected out of a total of 450 applicants are between 29 and 41 and are all French nationals. Their occupations range from history and geography teachers to builders, from psychiatrists to postmen and from gardeners to accountants.