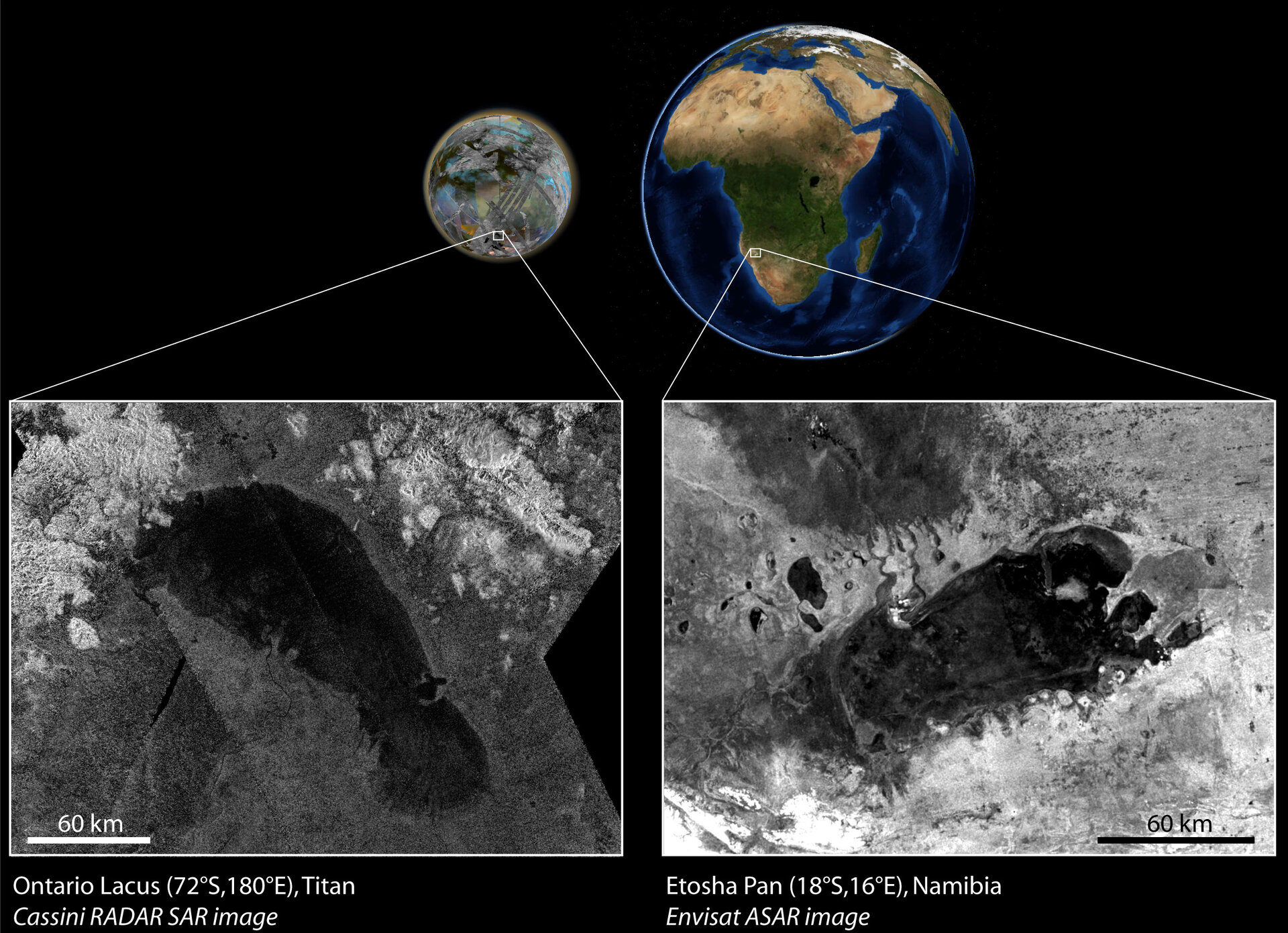 A region on Saturn’s moon Titan has been found to be similar to the Etosha Pan in Namibia, Africa. Both are ephemeral lakes – large, shallow depressions that sometimes fill with liquid.

Ontario Lacus is the largest lake in the southern hemisphere of Saturn’s moon, Titan. It is a little smaller than its namesake, Lake Ontario in North America, but otherwise differs from it in some major ways.

It is filled with liquid hydrocarbons, not water, and it is only a few metres deep at most, located in an extremely shallow depression in a flat sedimentary basin, surrounded by small mountain ranges.

In addition, a new study shows that these landforms and the climatic conditions in the region are similar to those of semi-arid regions on Earth, such as the salt pans of southern Africa.

The observations were made by the Cassini orbiter, part of the NASA, ESA and Italian Space Agency Cassini–Huygens mission to Saturn’s system.

While Ontario Lacus was previously thought to be permanently filled with liquid methane, ethane and propane, these latest observations, published in the journal Icarus, suggest otherwise.

By combining data from Cassini’s imaging, spectroscopic and radar instruments – each of which observed Ontario Lacus twice – scientists led by Thomas Cornet of the Université de Nantes, France, found evidence for channels etched into the lake bed within the southern boundary of the depression. These channels remained visible between December 2007 and January 2010, each time the spatial resolution was able to resolve them.

“We conclude that the solid floor of Ontario Lacus is most probably exposed in those areas,” says Cornet.

In addition, Cassini shows sediments around Ontario Lacus that also indicate the liquid level has been higher in the past.

This is similar to ephemeral lakes on Earth. The researchers suggest its nearest cousin is the Etosha Pan in Namibia. This salt lake bed fills with a shallow layer water, provided by the rise of the underground aquifer during the rainy season, before evaporating to leave sediments like tide marks showing the previous extent of the water.

Cornet and colleagues thus believe that Ontario Lacus is also the result of subsurface hydrocarbon fluids occasionally welling up and flooding the depression, before then partially drying out again.

Beyond Earth, Titan is the only other world known to bear stable liquids on its surface. Where Earth has a water cycle, Titan has a full hydrocarbon cycle, based on hydrogen, carbon and nitrogen, taking place between the atmosphere, the surface and the subsurface. Titan’s lakes are an integral part of this process.