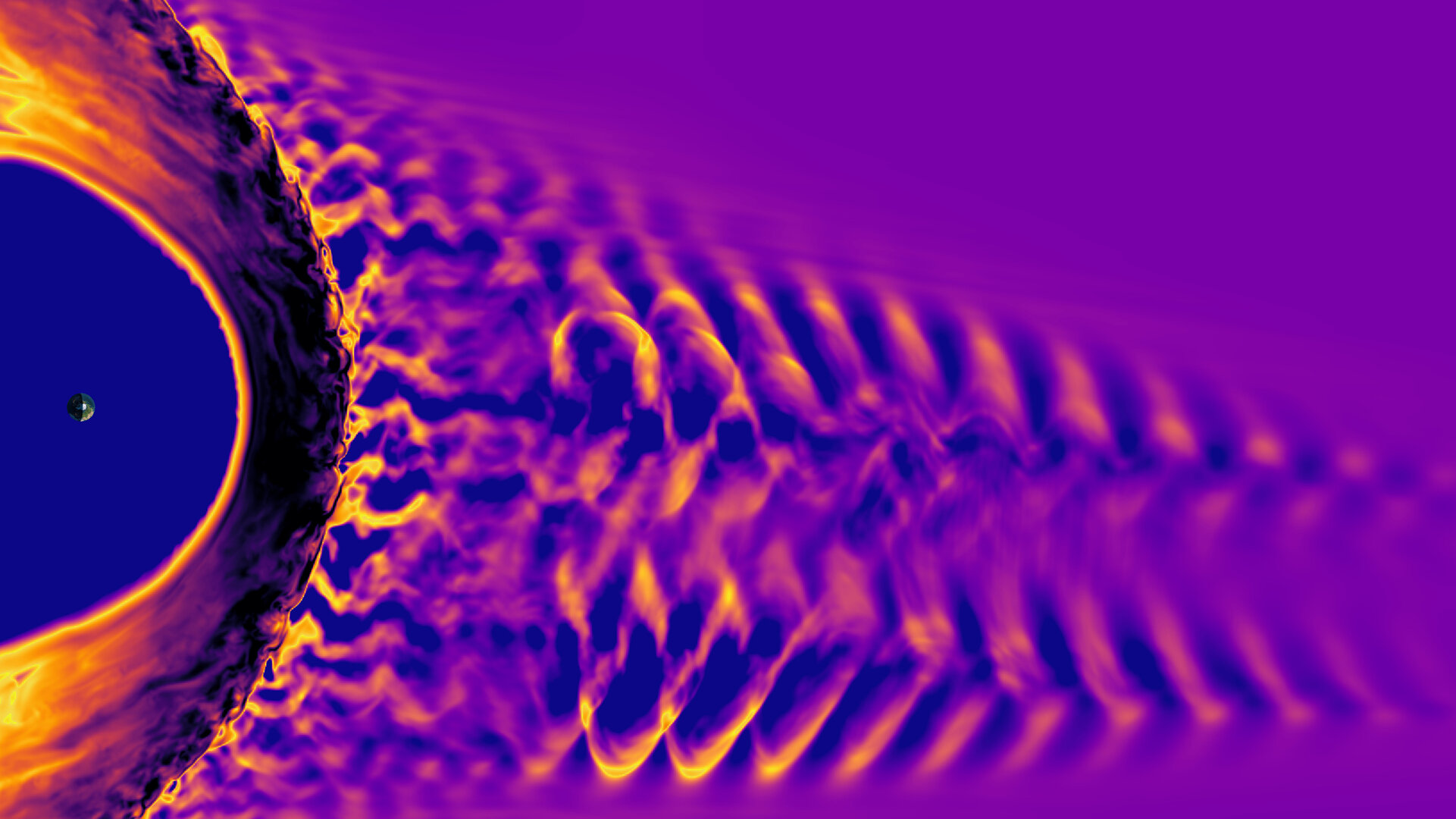 Data from ESA’s Cluster mission has provided a recording of the eerie ‘song’ that Earth sings when it is hit by a solar storm.

The song comes from waves that are generated in the Earth’s magnetic field by the collision of the storm. The storm itself is the eruption of electrically charged particles from the Sun’s atmosphere.

A team led by Lucile Turc, a former ESA research fellow who is now based at the University of Helsinki, Finland, made the discovery after analysing data from the Cluster Science Archive. The archive provides access to all data obtained during Cluster’s ongoing mission over almost two decades.

Cluster consists of four spacecraft that orbit Earth in formation, investigating our planet’s magnetic environment and its interaction with the solar wind – a constant flow of particles released by the Sun into the Solar System.

As part of their orbits, the Cluster spacecraft repeatedly fly through the foreshock, which is the first region that particles encounter when a solar storm hits our planet. The team found that in the early part of the mission, from 2001 to 2005, the spacecraft flew through six such collisions, recording the waves that were generated.

The new analysis shows that, during the collision, the foreshock is driven to release magnetic waves that are much more complex than first thought.

When the frequencies of these magnetic waves are transformed into audible signals, they give rise to an uncanny song that might recall more the sound effects of a science fiction movie than a natural phenomenon. 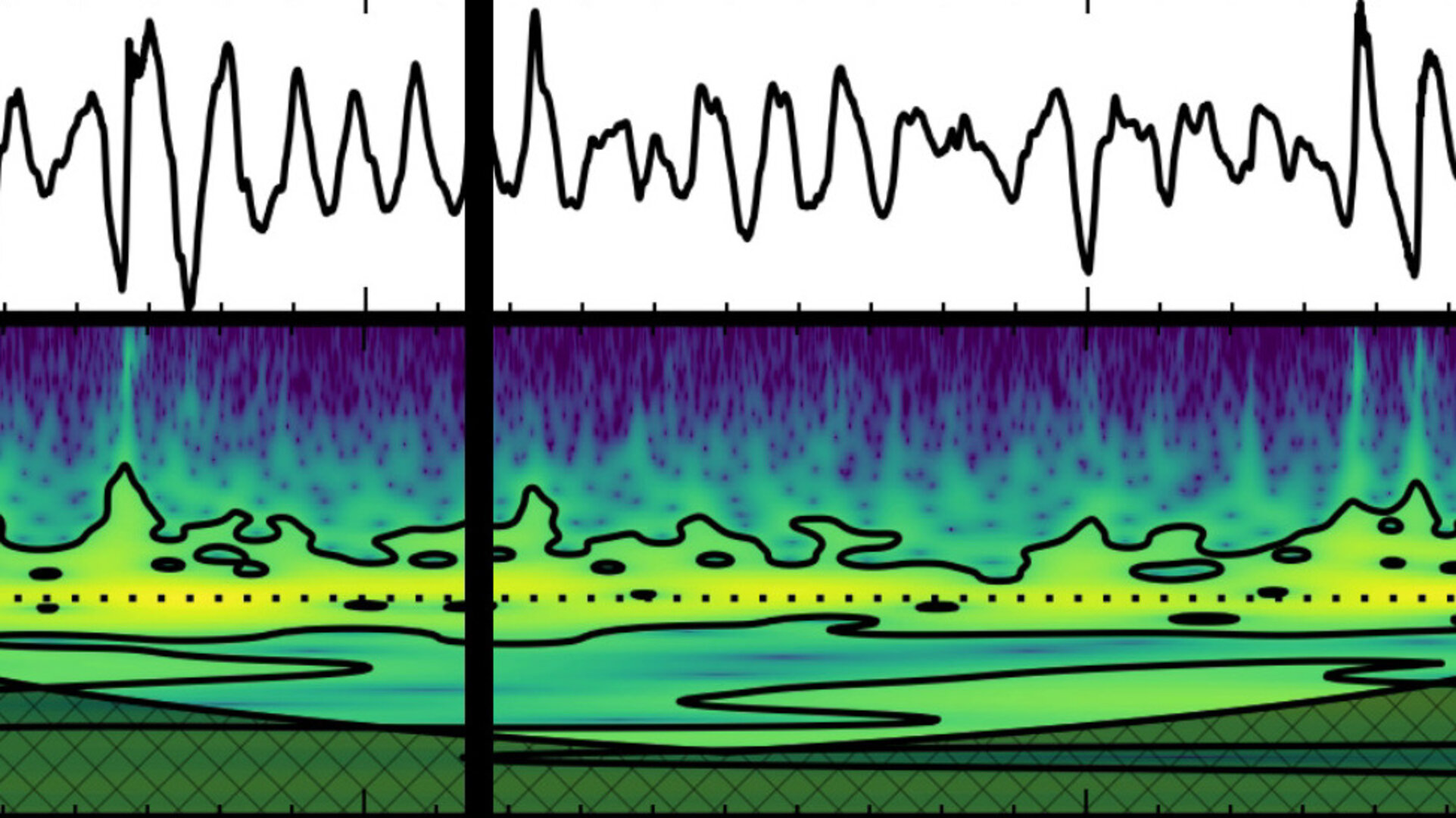 In quiet times, when no solar storm is striking the Earth, the song is lower in pitch and less complex, with one single frequency dominating the oscillation. When a solar storm hits, the frequency of the wave is roughly doubled, with the precise frequency of the resulting waves being dependent on the strength of the magnetic field in the storm.

“It’s like the storm is changing the tuning of the foreshock,” explains Lucile. 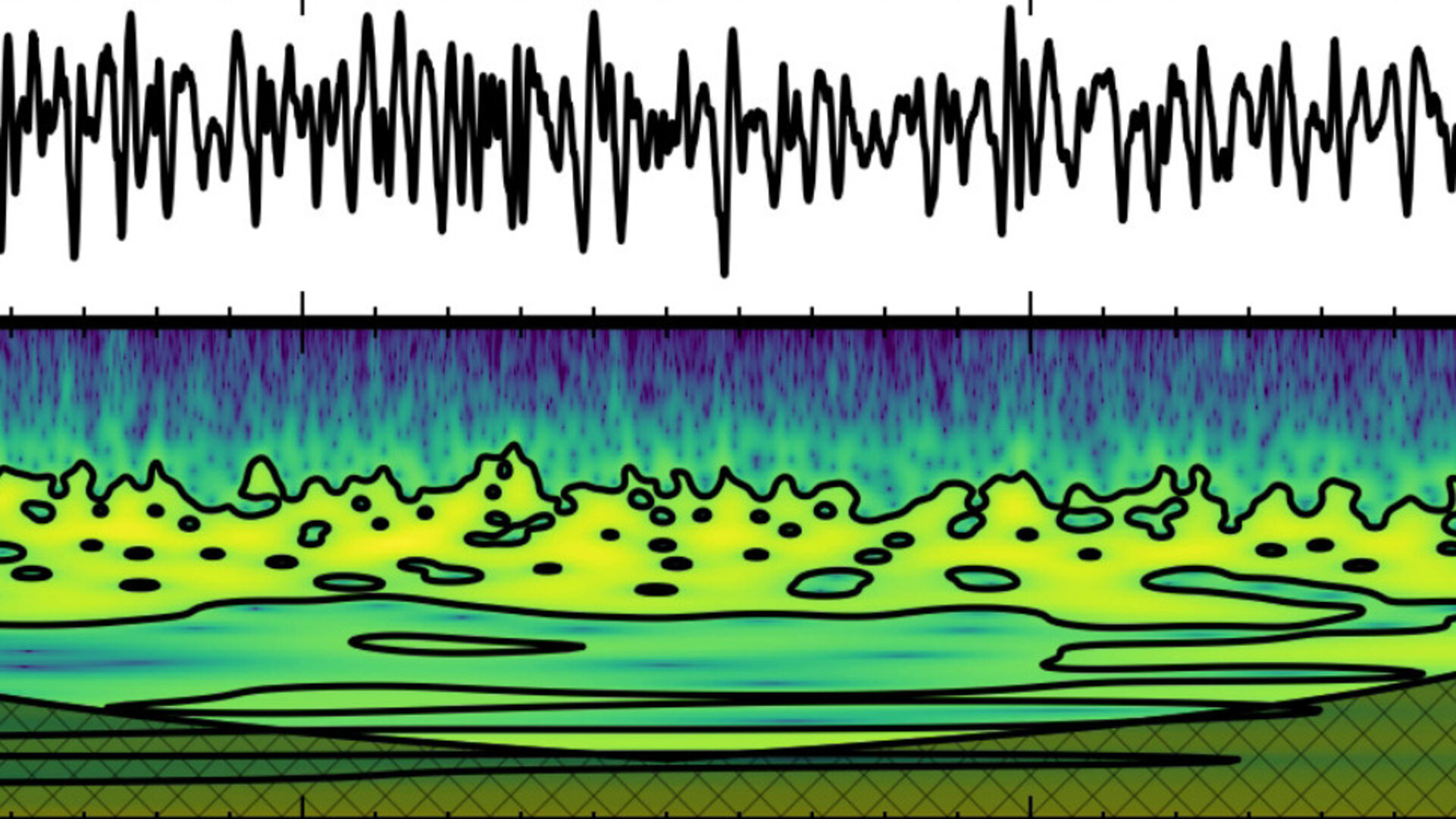 Earth’s magnetic song during a solar storm
Access the video

And it doesn’t stop there because not only does the frequency of the wave change but it also becomes much more complicated than the single frequency present in quiet times. Once the storm hits the foreshock, the wave breaks into a complex network of different, higher frequencies.

Computer simulations of the foreshock, performed using a model called Vlasiator, which is being developed at the University of Helsinki, demonstrate the intricate wave pattern that appears during solar storms.

The changes in the foreshock have the power to affect the way the solar storm is propagated down to the Earth’s surface. Although it is still an open question exactly how this process works, it is clear that the energy generated by waves in the foreshock cannot escape back into space, as the waves are pushed towards Earth by the incoming solar storm. 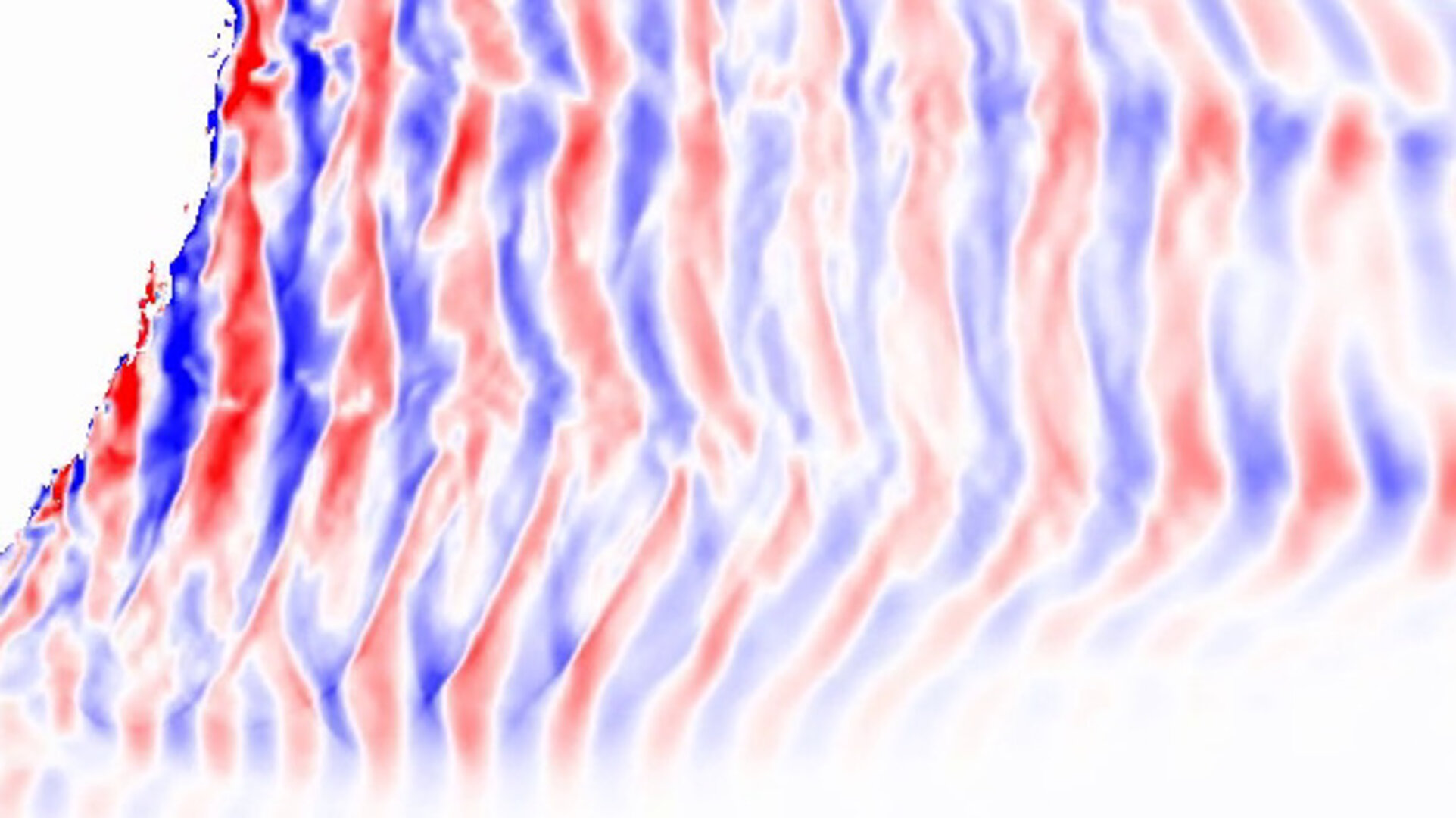 Before they reach our atmosphere, however, the waves encounter another barrier, the bow shock, which is the magnetic region of space that slows down solar wind particles before they collide with Earth's magnetic field. The collision of the magnetic waves modifies the behaviour of the bow shock, possibly changing the way it processes the energy of the incoming solar storm.

Behind the bow shock, the magnetic fields of Earth start to resonate at the frequency of the waves and this contributes to transmit the magnetic disturbance all the way to the ground. It is a fast process, taking around ten minutes from the wave being generated at the foreshock to its energy reaching the ground.

Lucile and colleagues are now working to understand exactly how these complex waves are generated.

“We always expected a change in frequency but not the level of complexity in the wave,” she adds. 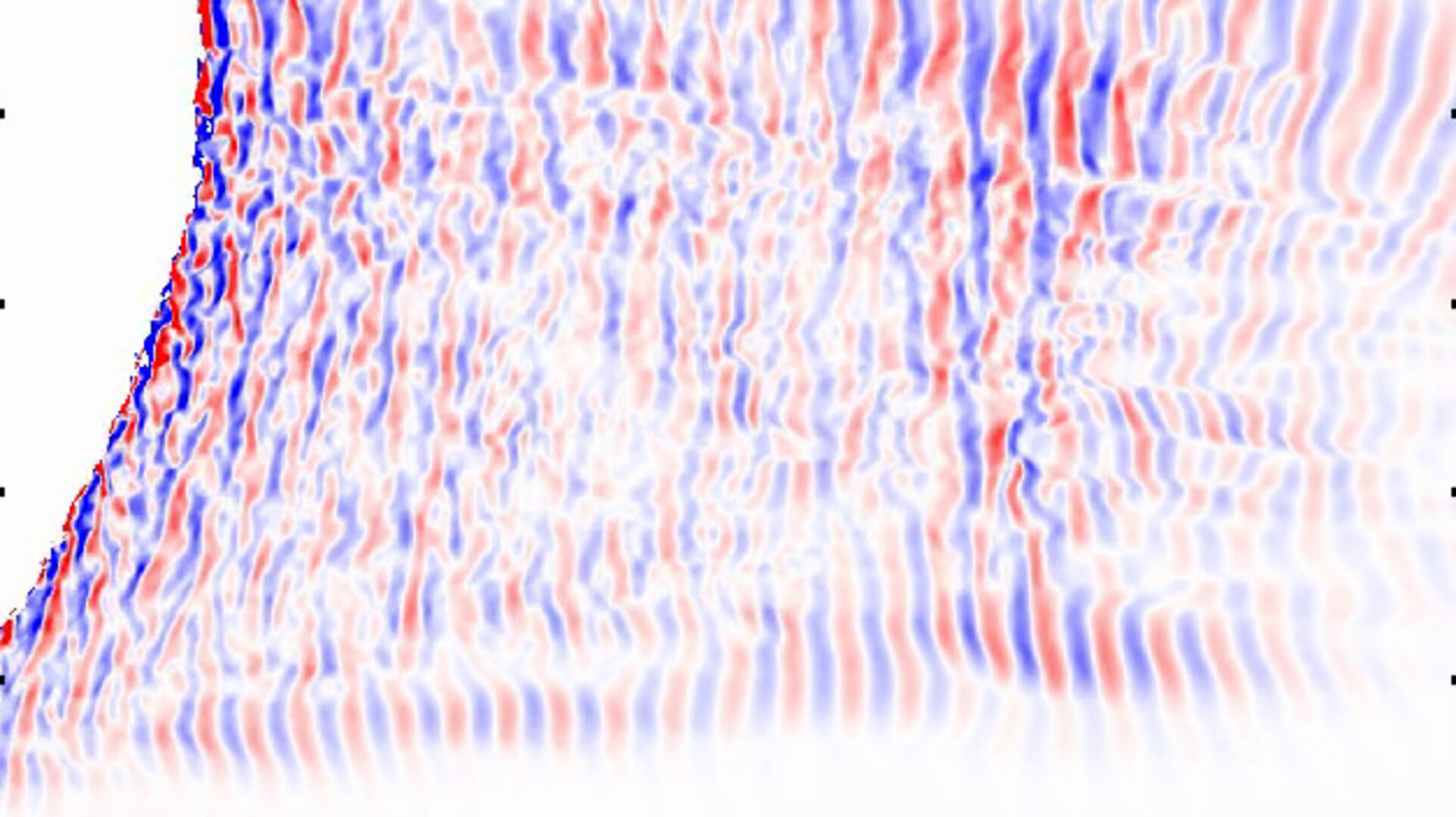 Solar storms are a part of space weather. While the solar wind is always blowing, explosive releases of energy close to the Sun’s surface generate turbulence and gusts that eventually give rise to solar storms.

Understanding space weather has become increasingly important to society because of the damaging effects solar storms can have on sensitive electronics and technology on ground and in space. It is now more important than ever that we understand how space weather disturbances such as solar storms propagate through the Solar System and down to Earth, and ESA’s upcoming Solar Orbiter mission, scheduled for launch in February 2020, will greatly contribute to these investigations.

This new scientific study based on the long-lived Cluster mission provides another detail in that knowledge but it also has a larger role to play in our understanding of the Universe. Magnetic fields are ubiquitous and so the kind of complex interaction seen in Earth’s foreshock may take place in a variety of cosmic environments, including exoplanets orbiting close to their parent star, as they would be immersed in intense magnetic fields.

“This is an excellent example of how Cluster continues to extend our knowledge of the Sun-Earth connection, even years after the original data was obtained,” says Philippe Escoubet, ESA Project Scientist for Cluster.

“The results take us deeper into the details of fundamental magnetic interactions that take place across the Universe.”

Notes for editors
First observations of the disruption of the Earth’s foreshock wave field during magnetic clouds by L. Turc et al is published in Geophysical Research Letters.

The audio files with the sonification of the Cluster measurements are available on ESA’s Soundcloud page.