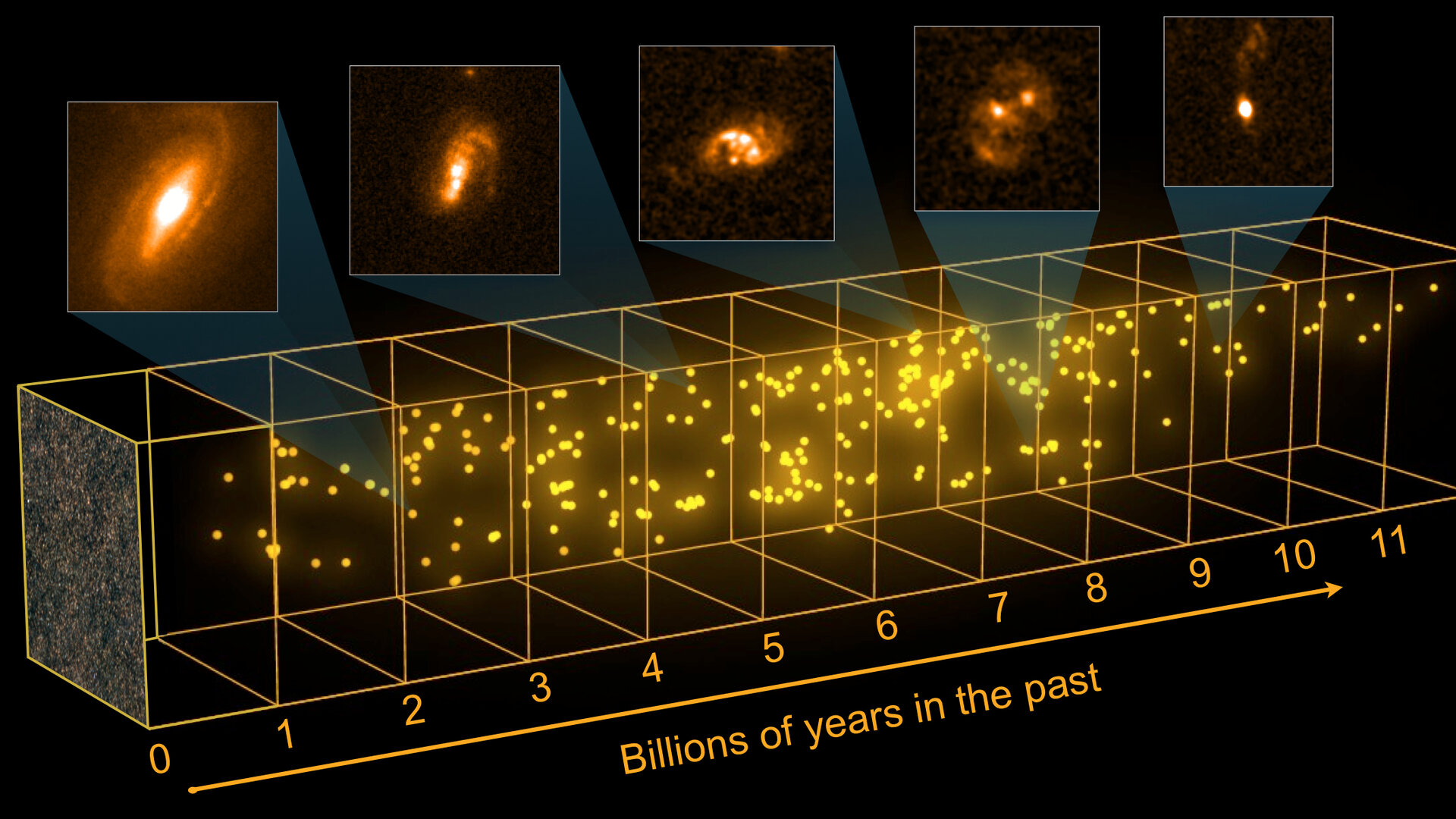 By combining the observing powers of ESA’s Herschel space observatory and the ground-based Keck telescopes, astronomers have characterised hundreds of previously unseen starburst galaxies, revealing extraordinary high star-formation rates across the history of the Universe.

Starburst galaxies give birth to hundreds of solar masses’ worth of stars each year in short-lived but intense events.

By comparison, our own Milky Way Galaxy on average produces the equivalent of only one Sun-like star per year.

Starburst galaxies generate so much starlight that they should outshine our Galaxy hundreds to thousands of times over, but the enormous quantities of gas fuelling them also contain vast amounts of dust as a result of the frantic star formation.

The dust absorbs much of the visible light, meaning that many of them look quite insignificant in that part of the spectrum.

However, the dust is warmed by the surrounding hot stars and re-emits the energy at far-infrared wavelengths.

Using ESA’s infrared Herschel space observatory, astronomers measured the temperature and brightness of thousands of dusty galaxies. From these, their star-formation rate could be then calculated.

“Starburst galaxies are the brightest galaxies in the Universe and contribute significantly to cosmic star formation, so it’s important to study them in detail and understand their properties,” says Dr Caitlin Casey of the University of Hawai‘i, lead author of the papers discussing the results in the Astrophysical Journal.

“Some of the galaxies found in this new survey have star-formation rates equivalent to the birth of several thousand solar-mass stars per year, constituting some of the brightest infrared galaxies yet discovered.”

To provide context to the observations and understand how star formation has changed over the Universe’s 13.7 billion year history, the distances to the galaxies were also needed.

With Herschel signposting the way, Dr Casey’s team used spectrometers on the twin 10-metre W.M. Keck telescopes on Mauna Kea, Hawai‘i, and obtained the redshifts of 767 of the starburst galaxies.

For most of the galaxies it was found that the light has been travelling towards us for 10 billion years or less.

About 5% of the galaxies are at even greater redshifts: their light was emitted when the Universe was only 1–3 billion years old.

“The Herschel data tell us how fiercely and prolifically these galaxies are producing stars,” says Seb Oliver from University of Sussex, UK, and Principal Investigator for the HerMES Key Programme, within which the data have been collected.

“Combining this information with the distances provided by the Keck data, we can uncover the contribution of the starburst galaxies to the total amount of stars produced across the history of the Universe.”

How such large numbers of starburst galaxies formed during the first few billions of years of the Universe’s existence poses a vital problem for galaxy formation and evolution studies.

One leading theory proposes that a collision between two young galaxies could have sparked an intense short-lived phase of star formation.

Another theory speculates that, when the Universe was young, individual galaxies had much more gas available to them to feed from, enabling higher rates of star formation without the need of collisions.

“It’s a hotly debated topic that requires details on the shape and rotation of the galaxies before it can be resolved,” adds Dr Casey.

“Before Herschel, the largest similar survey of distant starbursts involved only 73 galaxies – we’ve improved on that by over a factor of ten in this combined survey with Keck to determine the characteristics of this important galaxy population,” adds Göran Pilbratt, ESA’s Herschel project scientist.

The Herschel survey was part of the Herschel Multi-tiered Extragalactic Survey (HerMES), in which a 4 x 4 degree field mapped at 250, 350 and 500 microns by Herschel’s SPIRE instrument in 16 hours revealed 7000 sources.

The redshifts of 767 of these galaxies were obtained by the W.M Keck Observatory on Mauna Kea, Hawai‘i, using the Keck I Low Resolution Imaging Spectrometer (LRIS) and the Keck II DEep Imaging Multi-Object Spectrograph (DEIMOS).

Herschel is an ESA space observatory with science instruments provided by European-led Principal Investigator consortia and with important participation from NASA. SPIRE measures the intensity of the radiation emitted by an astronomical object, in three bands centred on 250, 350 and 500 microns. It was designed and built by a nationally-funded consortium led by Cardiff University; the consortium includes France, Canada, China, Italy, Spain, Sweden, and the US.