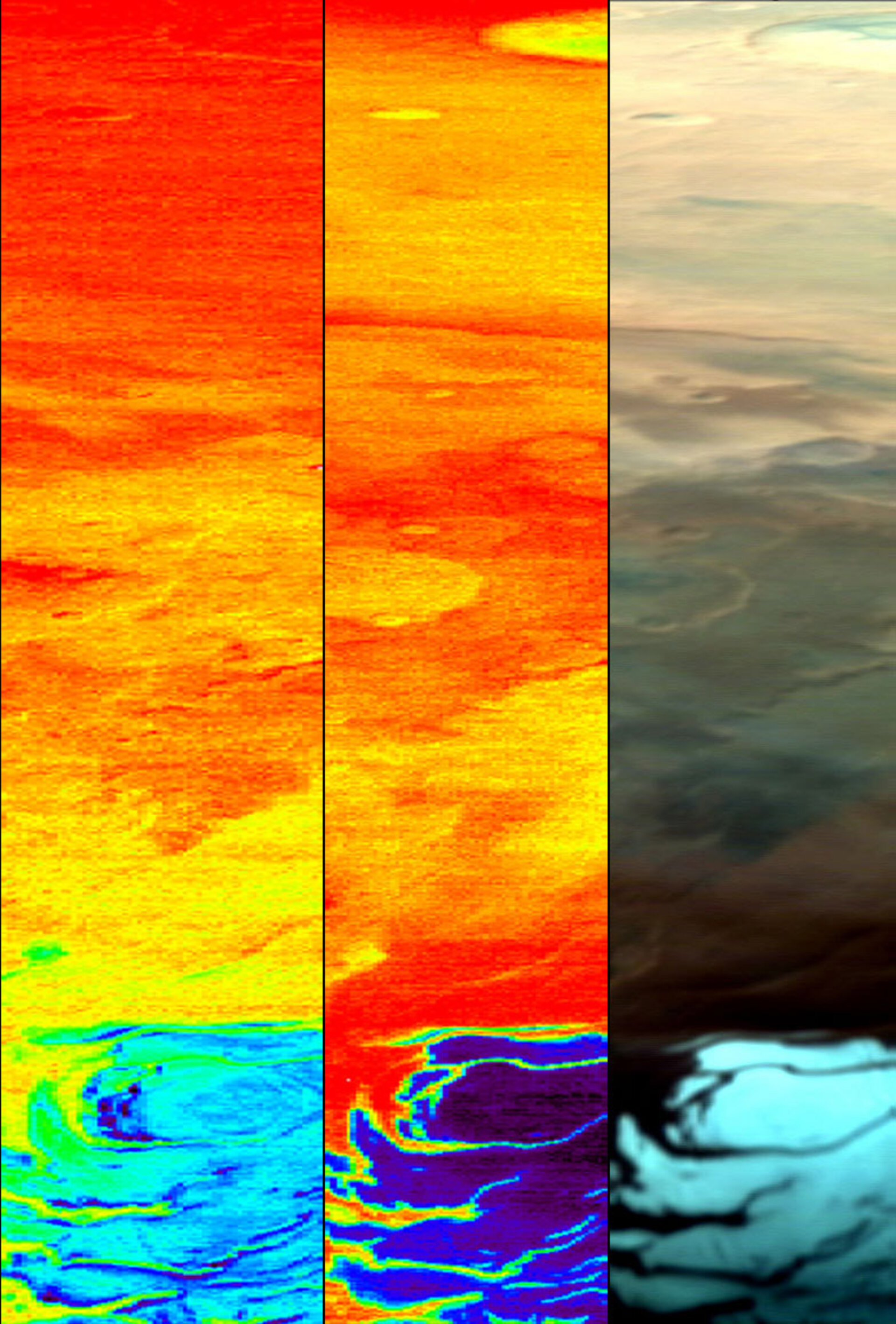 ESA PR 06-2004. Mars Express, ESA’s first mission to Mars, will reach its final orbit on 28 January. It has already been producing stunning results since its first instrument was switched on, on 5 January.

The significance of the first data was emphasised by the scientists at a European press conference today at ESA’s Space Operations Centre, Darmstadt, Germany.

"I did not expect to be able to gather together - just one month after the Mars Orbit Insertion of 25 December – so many happy scientists eager to present their first results", said Professor David Southwood, ESA Director of Science. One of the main targets of the Mars Express mission is to discover the presence of water in one of its chemical states. Through the initial mapping of the South polar cap on 18 January, OMEGA, the combined camera and infrared spectrometer, has already revealed the presence of water ice and carbon dioxide ice.

This information was confirmed by the PFS, a new high-resolution spectrometer of unprecedented accuracy. The first PFS data also show that the carbon oxide distribution is different in the northern and southern hemispheres of Mars.

The MaRS instrument, a sophisticated radio transmitter and receiver, emitted a first signal successfully on 21 January that was received on Earth through a 70- metre antenna in Australia after it was reflected and scattered from the surface of Mars. This new measurement technique allows the detection of the chemical composition of the Mars atmosphere, ionosphere and surface.

ASPERA, a plasma and energetic neutral atoms analyser, is aiming to answer the fundamental question of whether the solar wind erosion led to the present lack of water on Mars. The preliminary results show a difference in the characteristics between the impact of the solar wind area and the measurement made in the tail of Mars. Another exciting experiment was run by the SPICAM instrument (an ultraviolet and infrared spectrometer) during the first star occultation ever made at Mars. It has simultaneously measured the distribution of the ozone and water vapour, which has never been done before, revealing that there is more water vapour where there is less ozone.

ESA also presented astonishing pictures produced with the High Resolution Stereo Camera (HRSC). They represent the outcome of 1.87 million km2 of Martian surface coverage, and about 100 gigabytes of processed data. This camera was also able to make the longest swath (up to 4000 km) and largest area in combination with high resolution ever taken in the exploration of the Solar System.

This made it possible to create an impressive picture 24 metres long by 1.3 metres high, which was carried through the conference room at the end of the press event by a group of 10-year-old children.

Mrs Edelgard Bulmahn, German Minister for Research and Education, who is also chair of the ESA Council at Ministerial level, said at the press conference: "Europe can be proud of this mission: Mars Express is an enormous success for the European Space Programme."