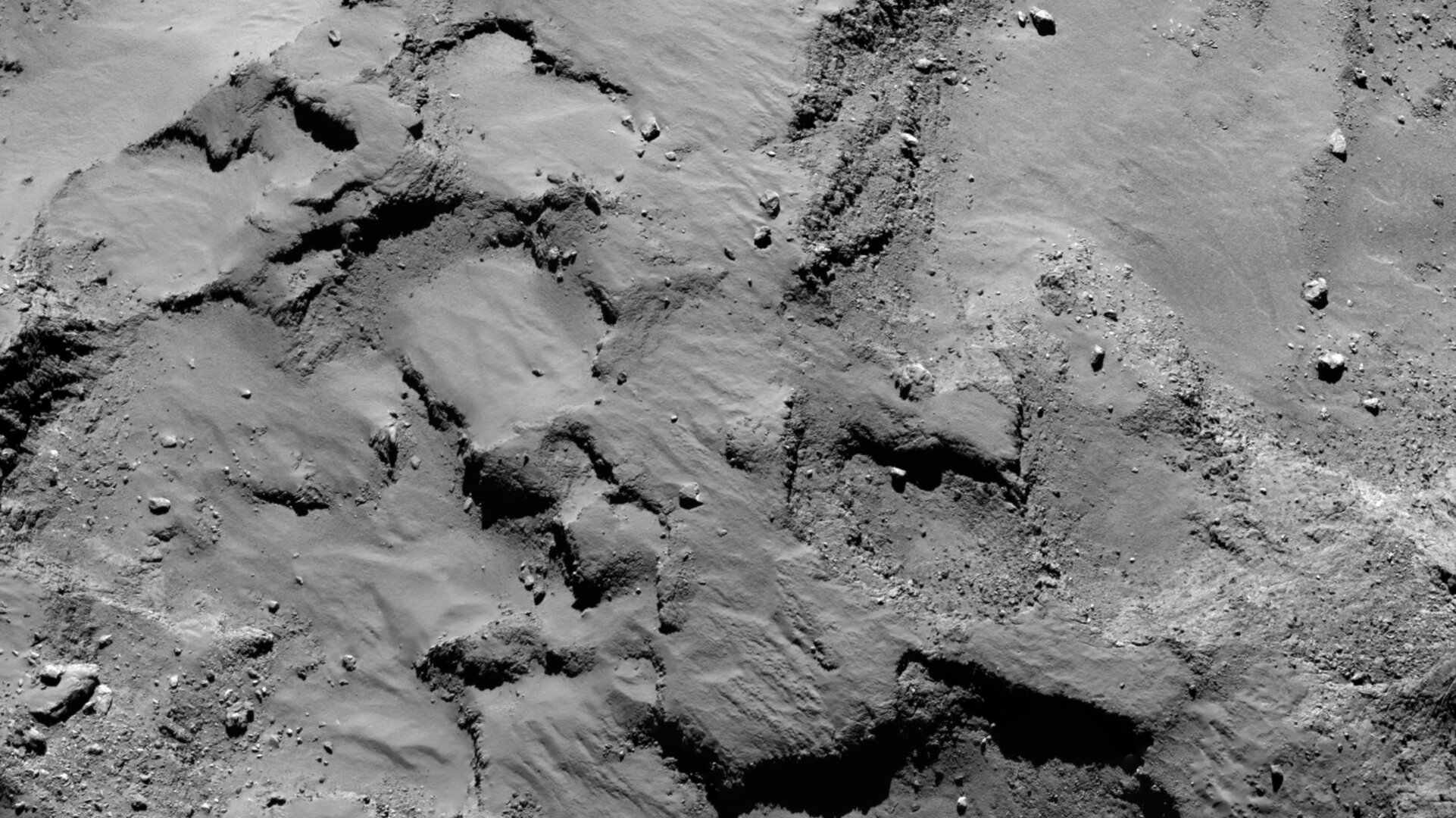 ESA has given the green light for its Rosetta mission to deliver its lander, Philae, to the primary site on 67P/Churyumov–Gerasimenko on 12 November, in the first-ever attempt at a soft touchdown on a comet.

Philae’s landing site, currently known as Site J and located on the smaller of the comet’s two ‘lobes’, was confirmed on 14 October following a comprehensive readiness review.

Since the arrival, the mission has been conducting an unprecedented survey and scientific analysis of the comet, a remnant of the early phases  of the Solar System’s 4.6 billion-year history.

At the same time, Rosetta has been moving closer to the comet: starting at 100 km on 6 August, it is now just 10 km from the centre of the 4 km-wide body. This allowed a more detailed look at the primary and backup landing sites in order to complete a hazard assessment, including a detailed boulder census.

The decision that the mission is ‘Go’ for Site J also confirms the timeline of events leading up to the landing. 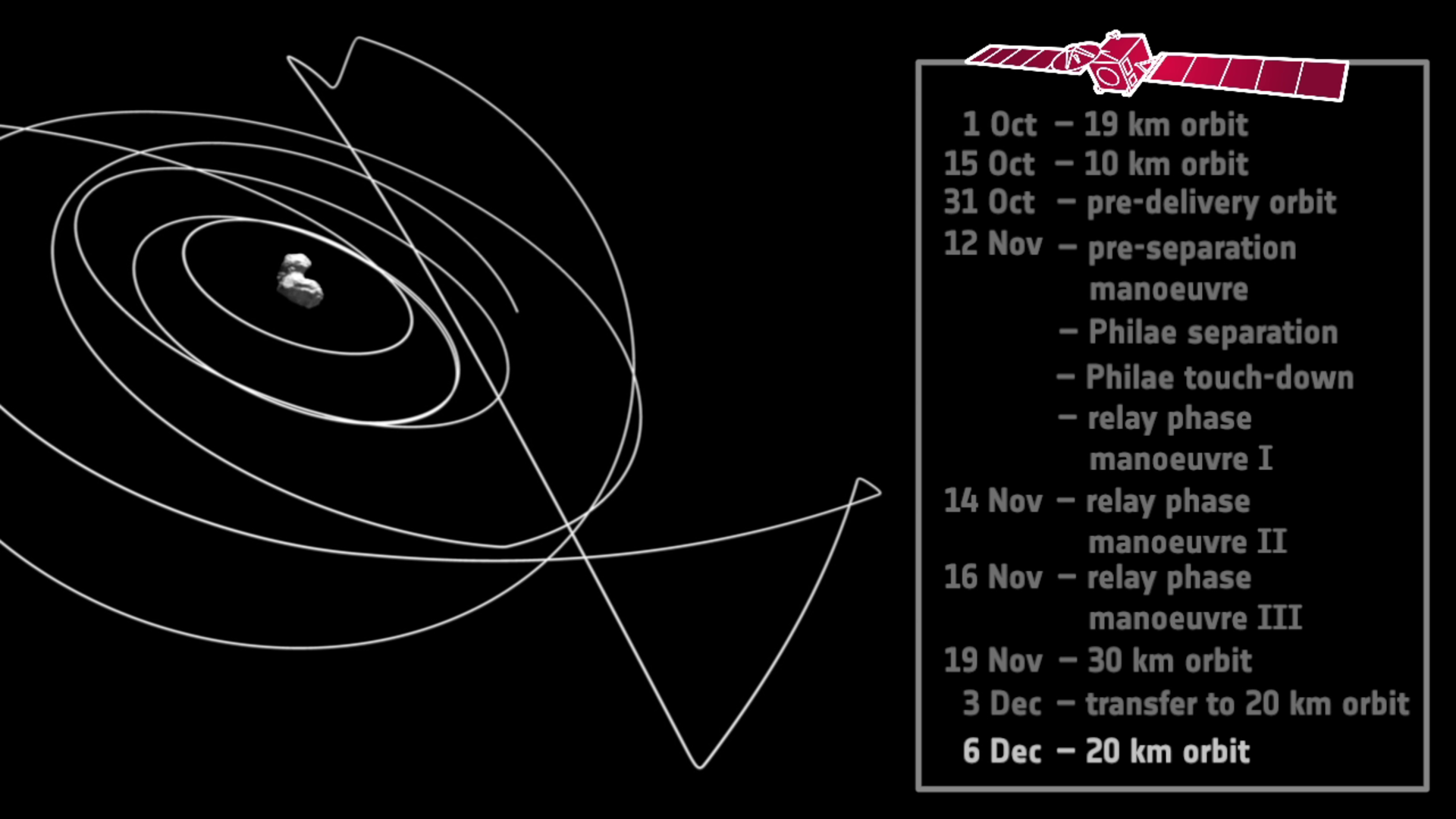 With a one-way signal travel time between Rosetta and Earth on 12 November of 28 minutes 20 seconds, that means that confirmation of separation will arrive on Earth ground stations at 09:03 GMT/10:03 CET and of touchdown at around 16:00 GMT/17:00 CET.

“Now that we know where we are definitely aiming for, we are an important step closer to carrying out this exciting – but high-risk – operation,” says Fred Jansen, ESA’s Rosetta mission manager.

“However, there are still a number of key milestones to complete before we can give the final Go for landing.”

A series of Go/No-Go decisions must be taken before separation, starting on 11 November with a confirmation from the flight dynamics team that Rosetta is on the right trajectory ahead of lander delivery.

Further Go/No-Go decisions will be made during the night of 11–12 November concerning readiness and uplink of commands, culminating in confirmation of the lander readiness for separation.

A short manoeuvre must then take place around two hours before separation. This will set Rosetta on course to release Philae on the right trajectory to land on the comet. The final critical Go/No-Go for separation occurs shortly after this manoeuvre.

After the release of Philae, Rosetta will manoeuvre up and away from the comet, before reorienting itself in order to establish communications with Philae.

“If any of the decisions result in a No-Go, then we will have to abort and revise the timeline accordingly for another attempt, making sure that Rosetta is in a safe position to try again,” says Fred Jansen.

All being well, Rosetta and its lander will begin communications about two hours after separation.

During the seven-hour descent, Philae will take images and conduct science experiments, sampling the dust, gas and plasma environment close to the comet.

It will take a ‘farewell’ image of the Rosetta orbiter shortly after separation, along with a number of images as it approaches the comet surface. It is expected that the first images from this sequence will be received on Earth several hours after separation.

Once safely on the surface, Philae will take a panorama of its surroundings. Again, this is expected back on Earth several hours later.

The first sequence of surface science experiments will begin about an hour after touchdown and will last for 64 hours, constrained by the lander’s primary battery lifetime.

Longer-term study of the comet by Philae will depend on for how long and how well the batteries are able to recharge, which in turn is related to the amount of dust that settles on its solar panels.

In any case, it is expected that by March 2015, as the comet moves closer in its orbit towards the Sun, temperatures inside the lander will have reached levels too high to continue operations, and Philae’s science mission will come to an end.

The Rosetta orbiter’s mission will continue for much longer. It will accompany the comet as it grows in activity until their closest approach to the Sun in August 2015 and then as they head back towards the outer Solar System.

This unprecedented mission will study how a comet evolves and give important insights into the formation of our Solar System, and the origins of water and perhaps even life on Earth.

A detailed operations timeline, including key Go/No-Go decisions leading up to separation, will be available soon.