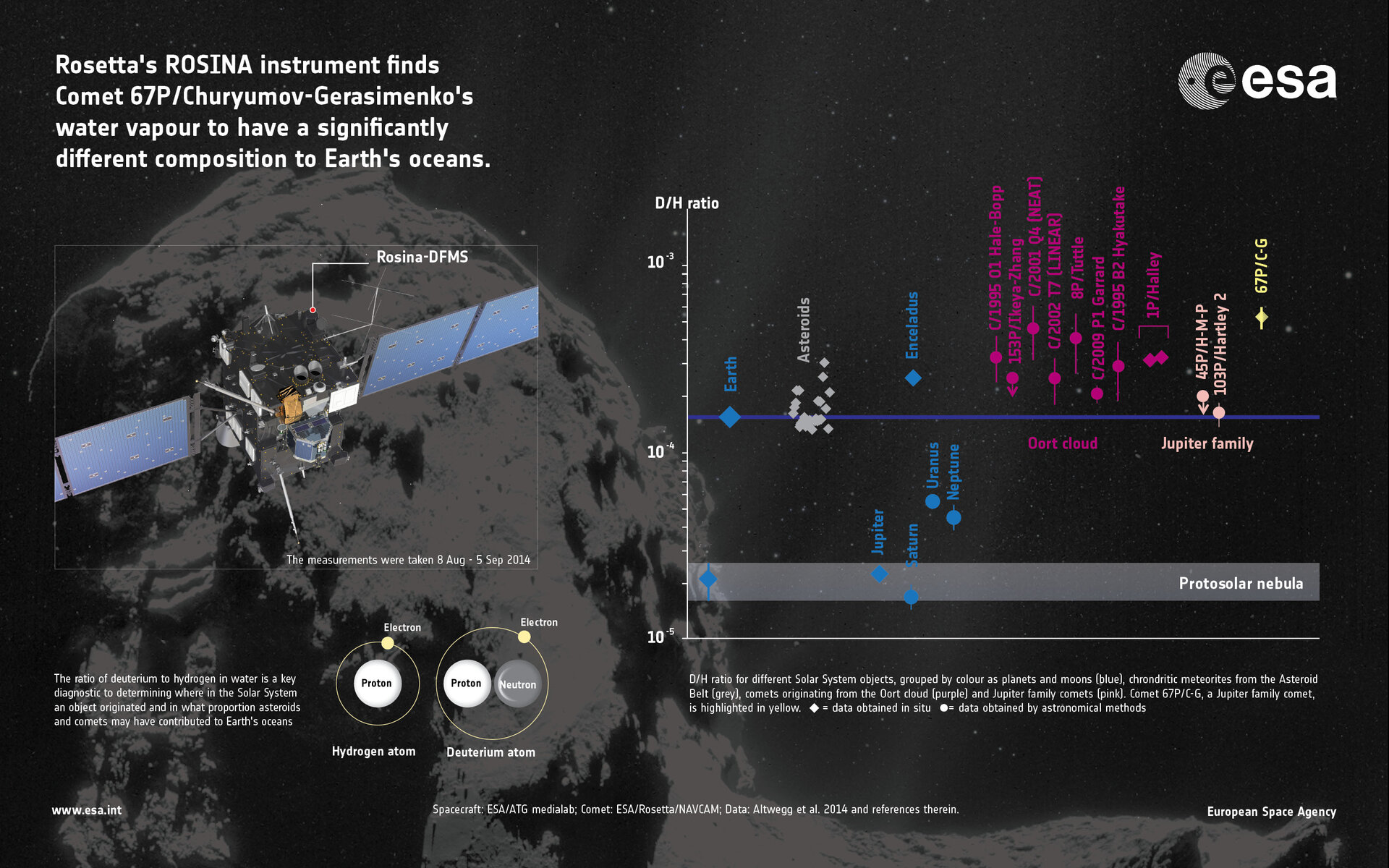 ESA’s Rosetta spacecraft has found the water vapour from its target comet to be significantly different to that found on Earth. The discovery fuels the debate on the origin of our planet’s oceans.

The measurements were made in the month following the spacecraft’s arrival at Comet 67P/Churyumov–Gerasimenko on 6 August. It is one of the most anticipated early results of the mission, because the origin of Earth’s water is still an open question.

One of the leading hypotheses on Earth’s formation is that it was so hot when it formed 4.6 billion years ago that any original water content should have boiled off. But, today, two thirds of the surface is covered in water, so where did it come from?

In this scenario, it should have been delivered after our planet had cooled down, most likely from collisions with comets and asteroids. The relative contribution of each class of object to our planet’s water supply is, however, still debated.

The key to determining where the water originated is in its ‘flavour’, in this case the proportion of deuterium – a form of hydrogen with an additional neutron – to normal hydrogen.

This proportion is an important indicator of the formation and early evolution of the Solar System, with theoretical simulations showing that it should change with distance from the Sun and with time in the first few million years.

One key goal is to compare the value for different kinds of object with that measured for Earth’s oceans, in order to determine how much each type of object may have contributed to Earth’s water.

Comets in particular are unique tools for probing the early Solar System: they harbour material left over from the protoplanetary disc out of which the planets formed, and therefore should reflect the primordial composition of their places of origin.

But thanks to the dynamics of the early Solar System, this is not a straightforward process. Long-period comets that hail from the distant Oort cloud originally formed in Uranus–Neptune region, far enough from the Sun that water ice could survive.

They were later scattered to the Solar System’s far outer reaches as a result of gravitational interactions with the gas giant planets as they settled in their orbits.

Conversely, Jupiter-family comets like Rosetta’s comet were thought to have formed further out, in the Kuiper Belt beyond Neptune. Occasionally these bodies are disrupted from this location and sent towards the inner Solar System, where their orbits become controlled by the gravitational influence of Jupiter.

Indeed, Rosetta’s comet now travels around the Sun between the orbits of Earth and Mars at its closest and just beyond Jupiter at its furthest, with a period of about 6.5 years.

Previous measurements of the deuterium/hydrogen (D/H) ratio in other comets have shown a wide range of values. Of the 11 comets for which measurements have been made, it is only the Jupiter-family Comet 103P/Hartley 2 that was found to match the composition of Earth’s water, in observations made by ESA’s Herschel mission in 2011.

By contrast, meteorites originally hailing from asteroids in the Asteroid Belt also match the composition of Earth’s water. Thus, despite the fact that asteroids have a much lower overall water content, impacts by a large number of them could still have resulted in Earth’s oceans.

It is against this backdrop that Rosetta’s investigations are important. Interestingly, the D/H ratio measured by the Rosetta Orbiter Spectrometer for Ion and Neutral Analysis, or ROSINA, is more than three times greater than for Earth’s oceans and for its Jupiter-family companion, Comet Hartley 2. Indeed, it is even higher than measured for any Oort cloud comet as well.

“This surprising finding could indicate a diverse origin for the Jupiter-family comets – perhaps they formed over a wider range of distances in the young Solar System than we previously thought,” says Kathrin Altwegg, principal investigator for ROSINA and lead author of the paper reporting the results in the journal Science this week.

“Our finding also rules out the idea that Jupiter-family comets contain solely Earth ocean-like water, and adds weight to models that place more emphasis on asteroids as the main delivery mechanism for Earth’s oceans.”

“We knew that Rosetta’s in situ analysis of this comet was always going to throw up surprises for the bigger picture of Solar System science, and this outstanding observation certainly adds fuel to the debate about the origin of Earth’s water,” says Matt Taylor, ESA’s Rosetta project scientist.

“As Rosetta continues to follow the comet on its orbit around the Sun throughout next year, we’ll be keeping a close watch on how it evolves and behaves, which will give us unique insight into the mysterious world of comets and their contribution to our understanding of the evolution of the Solar System.”

“67P/Churyumov-Gerasimenko, a Jupiter Family Comet with a high D/H ratio” by K. Altwegg et al., is published in the 10 December 2014 issue of Science.

The analysis is based on the results of over 50 spectra collected between 8 August and 5 September 2014, and the D/H ratio was derived from measurements of HD16O/H2 16O.

The ROSINA team is led by Kathrin Altwegg of the University of Bern, Switzerland.

Rosetta is an ESA mission with contributions from its Member States and NASA. Rosetta’s Philae lander was provided by a consortium led by DLR, MPS, CNES and ASI. Rosetta is the first mission in history to rendezvous with a comet. It is escorting the comet as they orbit the Sun together. Philae landed on the comet on 12 November 2014. Comets are time capsules containing primitive material left over from the epoch when the Sun and its planets formed. By studying the gas, dust and structure of the nucleus and organic materials associated with the comet, via both remote and in situ observations, the Rosetta mission should become the key to unlocking the history and evolution of our Solar System.