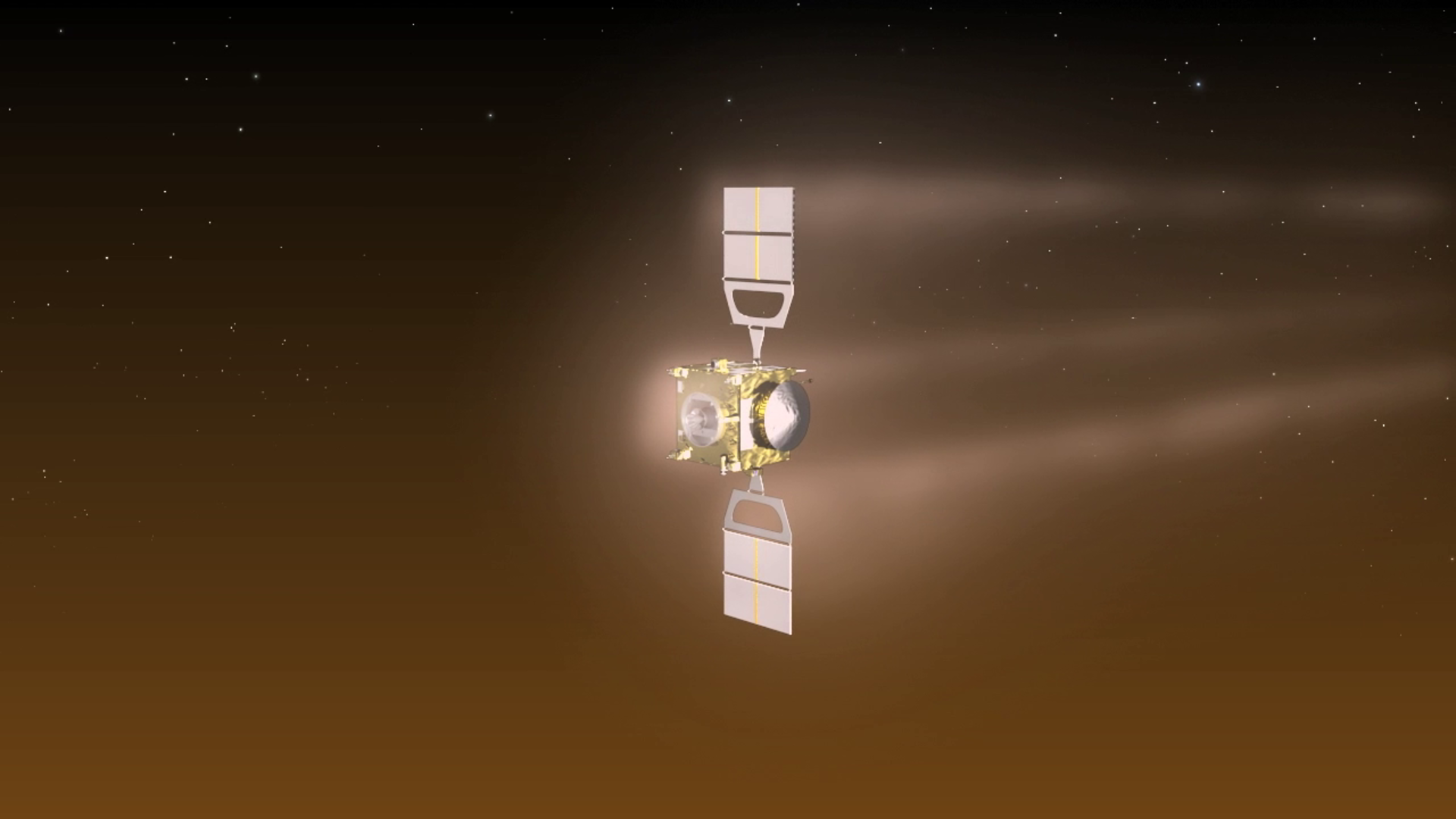 After eight years in orbit, ESA’s Venus Express has completed routine science observations and is preparing for a daring plunge into the planet’s hostile atmosphere.

Venus Express was launched on a Soyuz–Fregat from the Russian Baikonur Cosmodrome in Kazakhstan on 9 November 2005, and arrived at Venus on 11 April 2006.

It has been orbiting Venus in an elliptical 24-hour loop that takes it from a distant 66 000 km over the south pole – affording incredible global views – to an altitude of around 250 km above the surface at the north pole, close to the top of the planet’s atmosphere.

With a suite of seven instruments, the spacecraft has provided a comprehensive study of the ionosphere, atmosphere and surface of Venus.

“Venus Express has taught us just how variable the planet is on all timescales and, furthermore, has given us clues as to how it might have changed since its formation 4.6 billion years ago,” says Håkan Svedhem, ESA’s project scientist.

“This information is helping us decipher how Earth and Venus came to lead such dramatically different lives, but we’ve also noticed that there are some fundamental similarities.”

Venus has a surface temperature of over 450°C, far hotter than a normal kitchen oven, and an extremely dense, choking mixture of noxious gases for an atmosphere. But from the mission’s infrared survey of the chemical composition of the rocky surface, we have learned that Venus might have once had a plate tectonics system like Earth, and even an ocean of water.

Today, the total amount of water on Earth is 100 000 times that on Venus. But because the two planets are about the same size and formed at the same time, both may have had similar amounts of the precious liquid in their early years.

Meanwhile, the spacecraft’s cameras have tracked thousands of features in the cloud tops some 70 km above the planet’s surface, including an enormous swirling vortex at the planet’s south pole that shares similarities with hurricanes on Earth. The spacecraft also recorded bursts of lightning – identified by their electromagnetic signature – generated in clouds of sulphuric acid.

Studies of the planet’s ‘super-rotating’ atmosphere – it whips around the planet in just four Earth-days, much faster than the 243 days the planet takes to complete one rotation about its axis – also turned up some intriguing surprises. In one study, average wind speeds were found to have increased from roughly 300 km/h to 400 km/h over a period of six Earth years.

Conversely, a separate study found that the rotation of the planet had slowed by 6.5 minutes since NASA’s Magellan, which completed its 5-year mission at Venus 20 years ago, measured it.

However, it remains unknown if there is a relationship between the increasing wind speeds and the slowing rotation.

Magellan’s radar survey of the planet revealed that its surface was heavily altered in the past by a large number of volcanoes. But Venus Express has provided tantalising hints that the planet may well be still geologically active today. One study found numerous lava flows that must have been created no more than 2.5 million years ago, just yesterday on geological timescales, and perhaps much more recently.

Indeed, measurements of sulphur dioxide in the upper atmosphere have shown large variations over the course of the mission. Although peculiarities in the atmospheric circulation may produce a similar result, it is the most convincing argument to date of present-day active volcanism.

Now, after eight years in orbit, the fuel supplies necessary to maintain the elliptical orbit are running low and will soon be exhausted. Thus, routine science operations concluded this week, and the spacecraft is being prepared for one final mission: to make a controlled plunge deeper into the atmosphere than ever before attempted.

“We have performed previous short ‘aerodrag’ campaigns where we’ve skimmed the thin upper layers of the atmosphere at about 165 km, but we want to go deeper, perhaps as deep as 130 km, maybe even lower,” says Patrick Martin, Venus Express mission manager.

“It is only by carrying out daring operations like these that we can gain new insights, not only about usually inaccessible regions of the planet’s atmosphere, but also how the spacecraft and its components respond to such a hostile environment.”

This ‘experimental aerobraking’ phase is planned for 18 June – 11 July, during which time some limited science measurements with the spacecraft’s magnetic field, solar wind and atom analysing instruments will be possible. Also, temperature and pressure sensors will record the conditions that the spacecraft is experiencing.

“The campaign also provides the opportunity to develop and practise the critical operations techniques required for aerobraking, an experience that will be precious for the preparation of future planetary missions that may require it operationally,” says Paolo Ferri, head of mission operations.

Aerobraking can be used as a way of getting into orbit around planets without having to carry quite so much fuel, thus reducing the launch mass.

It is possible that the remaining fuel in Venus Express will be exhausted during this phase or that the spacecraft does not survive these risky operations. But if the spacecraft is still healthy afterwards, its orbit will be raised again and limited operations will continue for several more months, fuel permitting.

However, by the end of the year, it is likely that Venus Express will have made its final descent into the atmosphere of the planet, bringing a fantastic scientific endeavour to an end.

“Venus Express has penetrated deeper into the mysteries of this veiled planet than anyone ever dreamed, and will no doubt continue to surprise us down to the last minute,” adds Håkan.