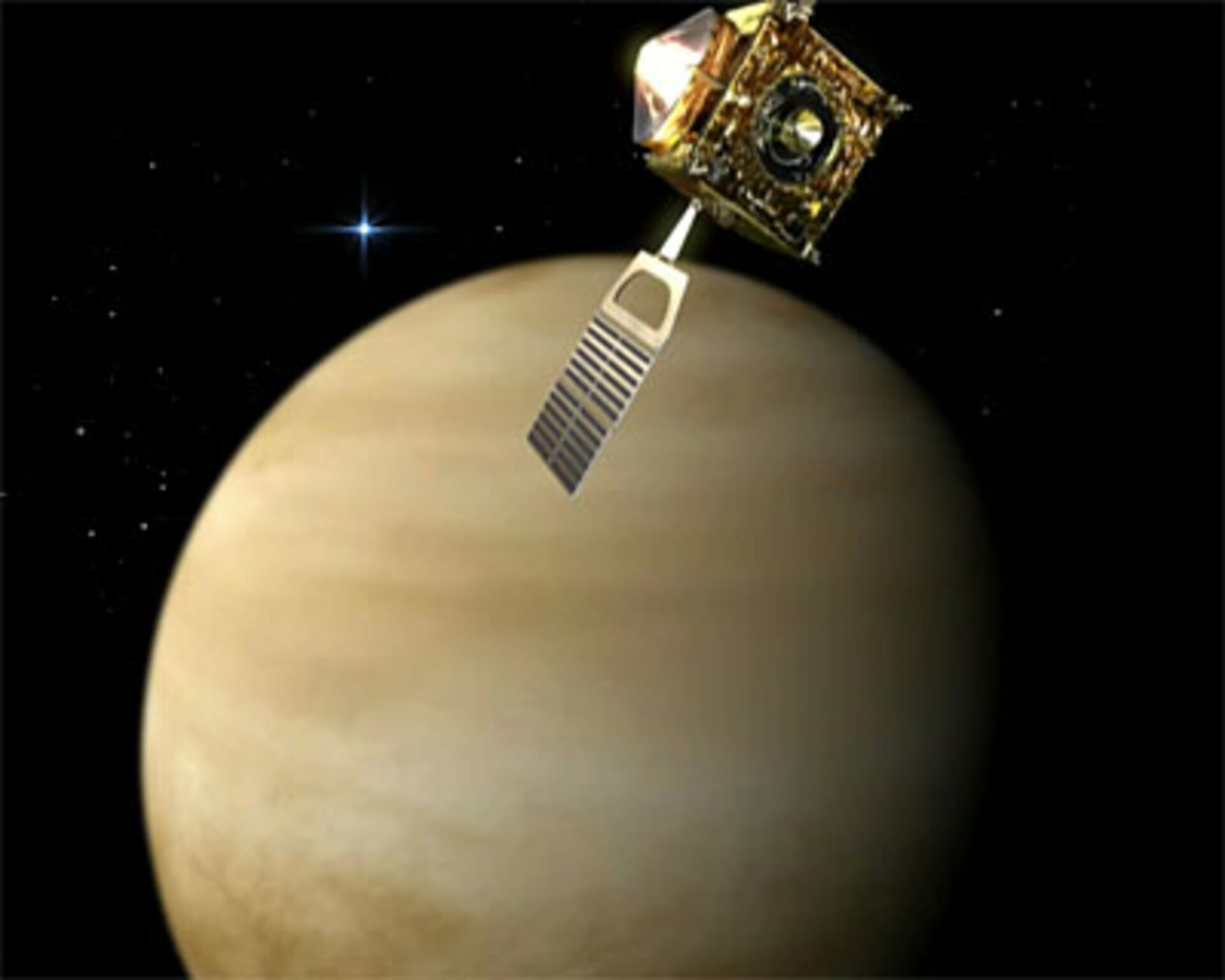 ESA’s Venus Express has measured a highly variable quantity of the volcanic gas sulphur dioxide in the atmosphere of Venus. Scientists must now decide whether this is evidence for active volcanoes on Venus, or linked to a hitherto unknown mechanism affecting the upper atmosphere.

The search for volcanoes is a long-running thread in the exploration of Venus. “Volcanoes are a key part of a climate system,” says Fred Taylor, a Venus Express Interdisciplinary Scientist from Oxford University. That’s because they release gases such as sulphur dioxide into the planet’s atmosphere.

On Earth, sulphur compounds do not stay in the atmosphere for long. Instead, they react with the surface of the planet. The same is thought to be true at Venus, although the reactions are much slower, with a time scale of 20 million years.

Some scientists have argued that the large proportion of sulphur dioxide found by previous space missions at Venus is the ‘smoking gun’ of recent volcanic eruptions. However, others maintain that the eruptions could have happened around 10 million years ago and that the sulphur dioxide remains in the atmosphere because it takes such a long time to react with the surface rocks.

I am very sceptical about the volcanic hypothesis. However, I must admit that we don't understand yet why there is so much sulphur dioxide at high altitudes

New observations from Venus Express showing rapid variations of sulphur dioxide in the upper atmosphere have revived this debate.

The SPICAV (Spectroscopy for Investigation of Characteristics of the Atmosphere of Venus) instrument analyses the way starlight or sunlight is absorbed by Venus’s atmosphere. The absorbed light tells scientists the identity of the atoms and molecules found in the planet’s atmosphere. This technique works only in the more tenuous upper atmosphere, above the clouds at an altitude of 70–90 km. In the space of a few days, the quantity of sulphur dioxide in the upper atmosphere dropped by two-thirds.

Jean-Loup Bertaux, Service d’Aeronomie du CNRS, Verrières-le-Buisson, is the Principal Investigator for SPICAV. “I am very sceptical about the volcanic hypothesis,” he says. “However, I must admit that we don’t understand yet why there is so much sulphur dioxide at high altitudes, where it should be destroyed rapidly by solar light, and why it is varying so wildly.”

Another instrument on Venus Express, VIRTIS (Visible and Infrared Thermal Imaging Spectrometer), can see below the clouds at infrared wavelengths. It detects the signature of sulphur dioxide by the amount of infrared radiation that the molecule absorbs, the stronger the signature, the more abundant the molecule.

The variation appears to be smaller in the lower atmosphere. ”With VIRTIS, we monitor sulphur dioxide at an altitude of 35–40 km, and we have seen no change larger than 40% on a global scale over the last two years,” says Giuseppe Piccioni, VIRTIS co-Principal Investigator, IASF-INAF in Rome.

The only way to be absolutely certain that active volcanism is taking place on Venus is to see a volcano in action. This is not easy when you are trying to look through 100 km of thick, cloudy atmosphere. But the Venus Express team are working on two ways of doing this. The first is to look for localised increases in sulphur dioxide that would indicate a large plume of the gas issuing from a volcano. The other way is to look for hot spots on the surface that can be shown to be fresh lava flows.

In both cases, the instrument to use is VIRTIS. “No thermal anomaly has been detected so far,” says Pierre Drossart, Observatoire de Paris, France, and co-Principal Investigator on VIRTIS. Nevertheless, the search continues and the team plan to announce their findings soon.