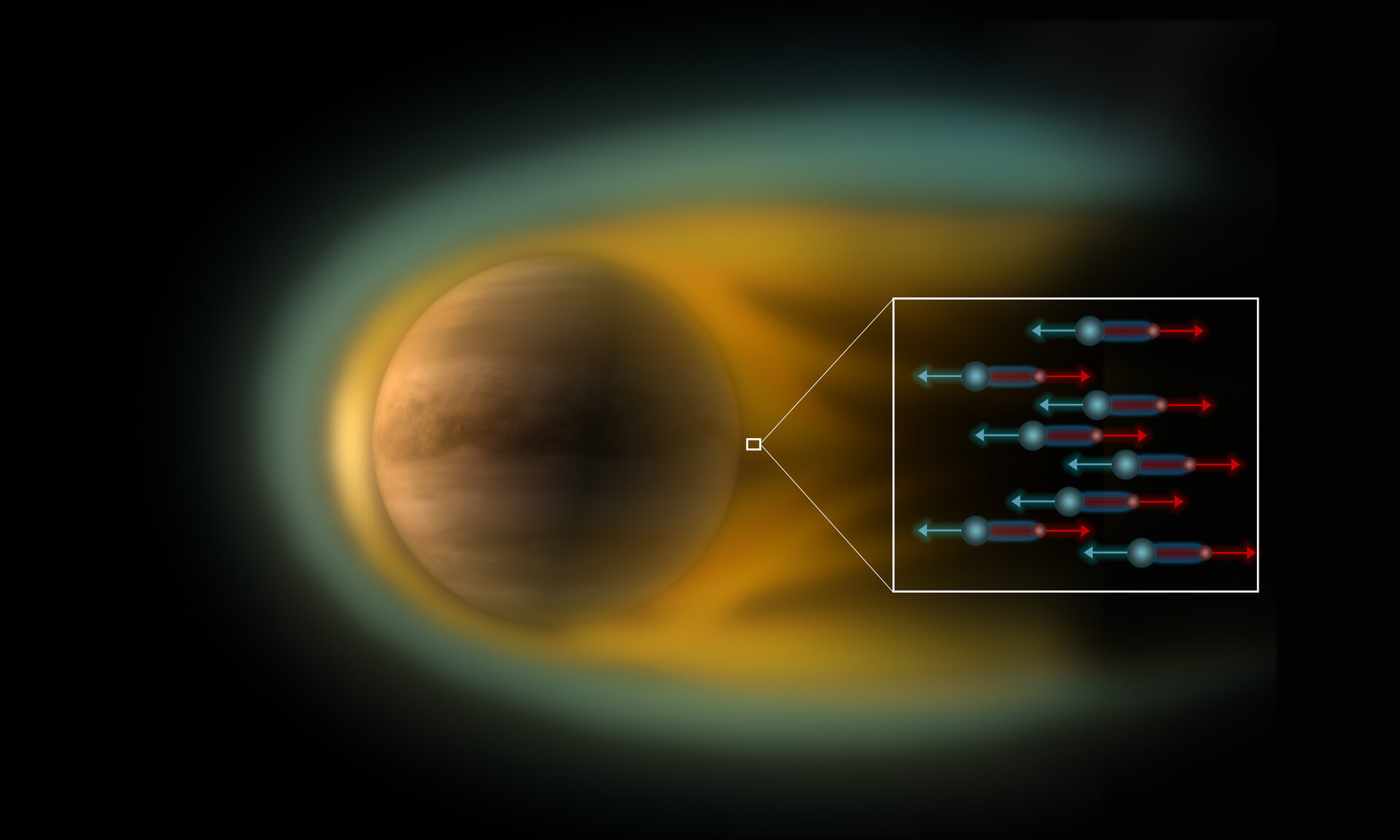 ESA’s Venus Express may have helped to explain the puzzling lack of water on Venus. The planet has a surprisingly strong electric field – the first time this has been measured at any planet – that is sufficient to deplete its upper atmosphere of oxygen, one of the components of water.

Venus is often called Earth’s twin, since the second planet from the Sun is only slightly smaller than our own. But its atmosphere is quite different, consisting mainly of carbon dioxide, with a little nitrogen and trace amounts of sulphur dioxide and other gases. It is much thicker than Earth’s, reaching pressures of over 90 times that of Earth at sea level, and incredibly dry, with a relative abundance of water about 100 times lower than in Earth’s gaseous shroud.

In addition, Venus now has a runaway greenhouse effect and a surface temperature high enough to melt lead. Also, unlike our home planet, it has no significant magnetic field of its own.

Scientists think Venus did once host large amounts of water on its surface over 4 billion years ago. But as it heated up, much of this water evaporated into the atmosphere, where it could then be ripped apart by sunlight and subsequently lost to space.

The solar wind – a powerful stream of charged subatomic particles blowing from the Sun – is one of the culprits, stripping hydrogen ions (protons) and oxygen ions from the planet’s atmosphere and so depriving it of the raw materials that make water.

Now, scientists using Venus Express have identified another difference between the two planets: Venus has a substantial electric field, with a potential around 10 V.

This is at least five times larger than expected. Previous observations in search of electric fields at Earth and Mars have failed to make a decisive detection, but they indicate that, if one exists, it is less than 2 V.

“We think that all planets with atmospheres have a weak electric field, but this is the first time we have actually been able to detect one,” says Glyn Collinson from NASA’s Goddard Flight Space Center, lead author of the study.

In any planetary atmosphere, protons and other ions feel a pull from the planet’s gravity. Electrons are much lighter and thus feel a smaller pull – they are able to escape the gravitational tug more easily.

As the negative electrons drift upwards in the atmosphere and away into space, they are nevertheless still connected to the positive protons and ions via the electromagnetic force, and this results in an overall vertical electric field being created above the planet’s atmosphere.

The electric field detected by Venus Express is much stronger than expected, and it can provide enough energy to oxygen ions to accelerate them upwards fast enough to escape the gravitational pull of the planet.

The discovery thus reveals another process, in addition to the solar wind stripping, that could contribute to the very low water content at Venus.

“The electric field of Venus is much stronger than we ever dreamed it could be, and really powerful if you’re as tiny as an oxygen ion,” adds Glyn.

“However, in real terms, the total power is only roughly the same as a single wind turbine, and it’s spread out over hundreds of kilometers of altitude, so as you can imagine, it’s incredibly hard to measure.”

The scientists patiently scrutinised two years’ data collected with an electron spectrometer, part of the ASPERA-4 instrument on Venus Express. They found 14 brief one-minute windows when the spacecraft was in just the right place with all the right conditions to measure an electric field. On every such occasion, the field was observed.

The reason why Venus has a much higher electric field than Earth is still under investigation. Glyn and his colleagues suspect that the planet’s closer position to the Sun might play a role.

“As it’s closer to the Sun than Earth, Venus receives twice as much ultraviolet light, which results in a higher number of free electrons in its atmosphere and, as a consequence, may cause a stronger electric field above the planet,” says Andrew Coates from Mullard Space Science Laboratory, UK, lead investigator of the ASPERA-4 electron spectrometer.

The presence of such a field at Venus suggests that particles and ions necessary to form water are leaving the planet’s atmosphere faster than was expected. In turn, this means that Venus might have hosted even larger amounts of water in the past, before being almost entirely stripped away.

“Water has a key role for life as we know it on Earth and possibly elsewhere in the Universe,” says Håkan Svedhem, Venus Express Project Scientist at ESA.

“By suggesting a mechanism able to deprive a planet close to its parent star of most of its water, this discovery calls for a rethink of how we define a ‘habitable’ planet, not only in our Solar System, but also in the context of exoplanets.”

The study is based on data from the electron spectrometer, part of the ASPERA-4 instrument on Venus Express, which is led by Y. Futaana at the Swedish Institute of Space Physics in Kiruna, Sweden.

ESA’s Venus Express was launched in 2005, arrived at Venus in 2006, and spent eight years exploring the planet from orbit. The mission ended in December 2014 after the spacecraft ran out of orbit-raising propellant and entered the atmosphere.