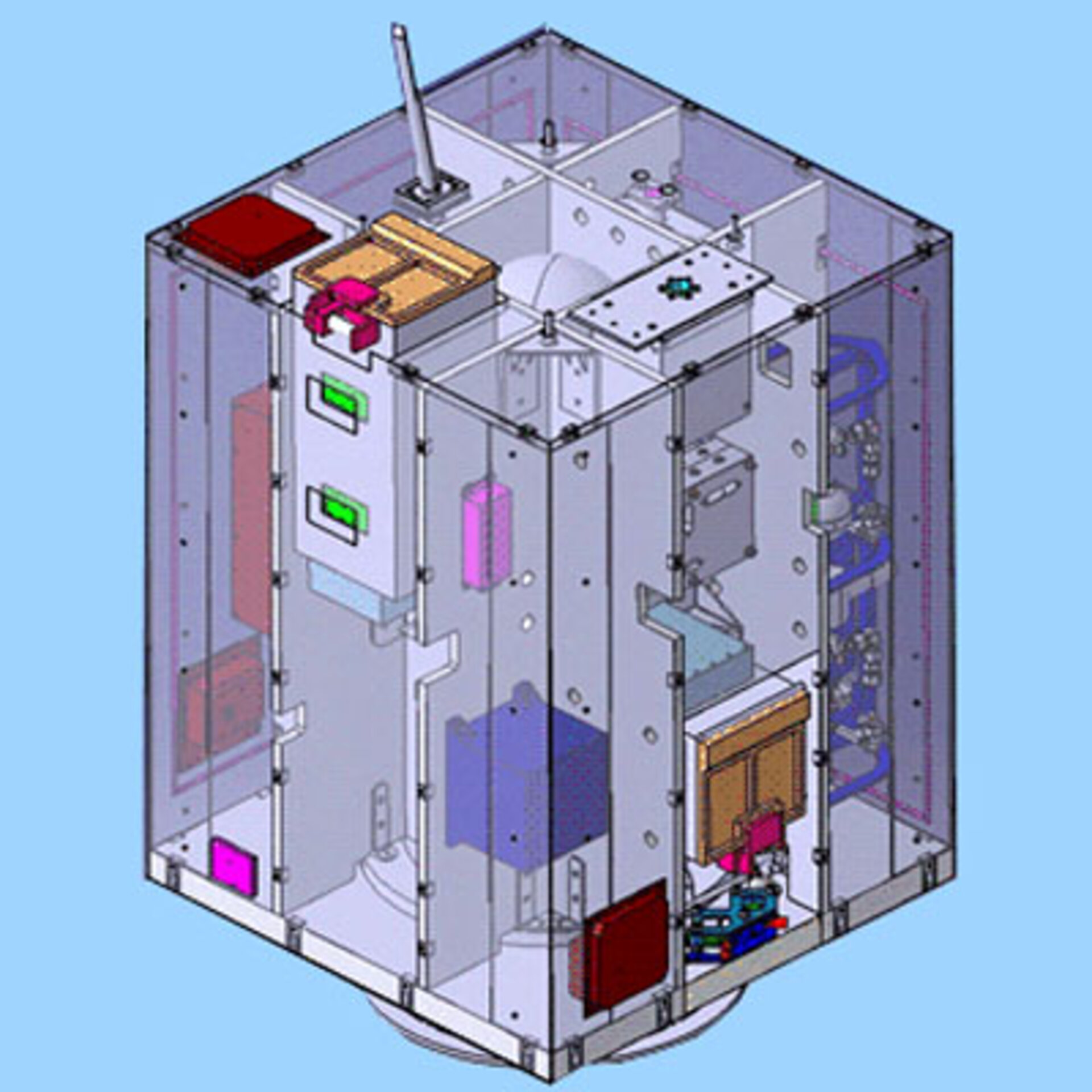 Scattered in universities across Europe, a 250-strong team of students have never collectively met in person, but between them they have built a space-ready satellite. SSETI Express is currently being integrated in an ESA cleanroom for a planned launch in May next year.

Collaboration between the pan-European network of students, universities and experts involved in the Student Space Education and Technology Initiative (SSETI) has been carried out via the internet.

Now that the completed subsystems are being delivered to ESA's European Space Technology Centre (ESTEC) in the Netherlands, remote participants from Italy to Denmark are eagerly following the integration process through daily photo updates, the integration logbook, and even a webcam.

Jörg Schaefer of Stuttgart University in Germany, has taken time out from studying for a PhD in Satellite Systems Design to take part in the integration work at ESTEC: "What we are doing here in the clean room is assembling the final spacecraft flight model. After all the planning and preparation for the mission it is exciting to see it finally take shape, with new parts being delivered almost every day."

Like a Russian doll, SSETI Express will carry inside it three smaller 'cubesats' – 10-centimetre cube technology testers built respectively by universities in Germany, Japan and Norway – for deployment when in orbit. The main SSETI Express satellite itself will test and characterise a propulsion system, return images of the Earth and serve as a transponder for amateur radio users.

SSETI Express measures just 60 by 60 by 70 cm across, small enough to piggyback its way to orbit on next year's commercial Cosmos DMC-3 launch from Plesetsk in Russia.

"With SSETI Express, we've come from design to integration in a year, which is a very rapid schedule for a spacecraft," explained Neil Melville, initially an ESA Young Graduate Trainee and now the SSETI Express Project Manager and also satellite system engineer. "Students are carrying out the work with the help of ESTEC engineers, who give us all sorts of tips we would not otherwise know, like the best way to perform spacecraft soldering – some engineers have been invited back to students' home universities to give lectures on their expertise!

"We hope to have the flight model completed by the end of November, in time to undergo space worthiness checks including vibration and thermal vacuum testing and ensuring electromagnetic compatibility. The key deadline we face is to transport the spacecraft to Russia by the end of February next year for a projected launch in mid May. Then just four or five people from our team will attend the launch, to be chosen according to those most capable to perform the pre-flight preparations and testing we are currently defining."

Flying an operational satellite would represent a formidable achievement, but for SSETI it will just be the start. SSETI Express is a test-bed and technology demonstrator for another larger scale mission, the European Student Earth Orbiter (ESEO), due to hitch a ride on an Ariane 5.

"ESEO is a complex 100 kg plus microsatellite with multiple instruments, due to launch into geostationary transfer orbit in 2007 as a piggy back payload on an Ariane 5,"explained Philippe Willekens of the ESA Education Department.

"The project is proceeding steadily but slowly, and it was looking as though many of our students would be graduating before seeing their hardware fly. Accordingly we developed Express as a precursor mission, using several ESEO subsystems that were ready to build and that the university departments responsible were eager to fly.

"Express serves as a motivational aid, a technological test-bed, a logistical precursor, and, most importantly, a demonstration of capability to the SSETI and educational communities, our support network at ESA, and the space community in general. Participants are getting educated in all facets of mission preparation, from design to launch and operations, including legal and risk management aspects."

Express, like the ESEO mission to follow it, is a truly European-scale project. For example, its solar panels come from the ESA-sponsored Dutch Nuna II solar car, while its electrical power system have been built by an Italian team from Naples, and its onboard computer and camera comes from Aalborg in Denmark.

The satellite's cold-gas propulsion subsystem comes German-made, from the University of Stuttgart while its twin communication systems – S-band and UHF - are the responsibility of English and German radio amateurs. A Danish student has made the spacecraft's magnetic-based attitude determination and control system.

ESA's Education Department founded SSETI in 2000. Its aim is to encourage students to learn about space through the design, construction and launch of small satellites. Its slogan: 'Let's launch the dream!'

Appreciating there are no university departments capable of carrying out such a task in its totality, SSETI has set up a network of individuals and academic institutions in order to distribute out the many activities needed to complete an actual space mission.

Coordination between groups is carried out using a dedicated news server and weekly Internet Relay Chats (IRCs) as well as the SSETI website. Face-to-face meetings are the exception rather than the rule, with group representatives meeting every six months for a workshop at ESTEC.

"SSETI is a frame programme that is now being concretely organised by several groups of students from various European universities," Willekens concluded. "The community is also open to other student groups.